As with any Samsung device, those in Samsung’s high mid-range C family have been subject to leak after leak after leak, showing us things like images and specs long before the handsets are officially announced. We have already gotten a small taste of the Samsung Galaxy C7, establishing the pattern for the upcoming C family to leap into the spotlight well before their announcement. The Samsung Galaxy C5 is, of course, no exception. A user on Chinese microblogging service Sina Weibo apparently managed to get their hands on an early unit and run it through the AnTuTu benchmark. Although they didn’t share the score, all is not lost; AnTuTu also spits out a spec sheet for devices that get the benchmarking treatment, and that is what wound up on Sina Weibo.

The device shown here cements itself firmly into the high end of the mid-range market with 4GB of RAM, the gold standard for current flagships and, at this time, only exceeded by one upcoming handset. A fairly standard 32GB of internal storage compliments that huge amount of RAM. Other specs include a beefy camera combo, with 8 megapixels staring the user in the face and 16 megapixels aimed at your surroundings. The processor reveal shows us a Qualcomm Snapdragon 617, which was also featured in the HTC One A9. This, of course, means that Quick Charge 3.0 might be on board, but it’s no guarantee. An Adreno 405 graphics chip won’t be melting any faces, but is a decided step up from those found in most 2014 flagship devices and should push most apps and games quite nicely to the C5’s 1920 x 1080 screen. Sadly, these benchmark specs don’t include the battery capacity, which has failed to show up in previous leaks and benchmarks. The whole show is set to have Android 6.0.1 Marshmallow under the hood.

According to previous reports, the Samsung Galaxy C5 will boast a premium metal design, though without much else to differentiate it from Samsung’s normal design language. Those same reports peg the device as releasing in China sometime in May, but make no mention of a release in any other regions, as is the case with the Samsung Galaxy C7. 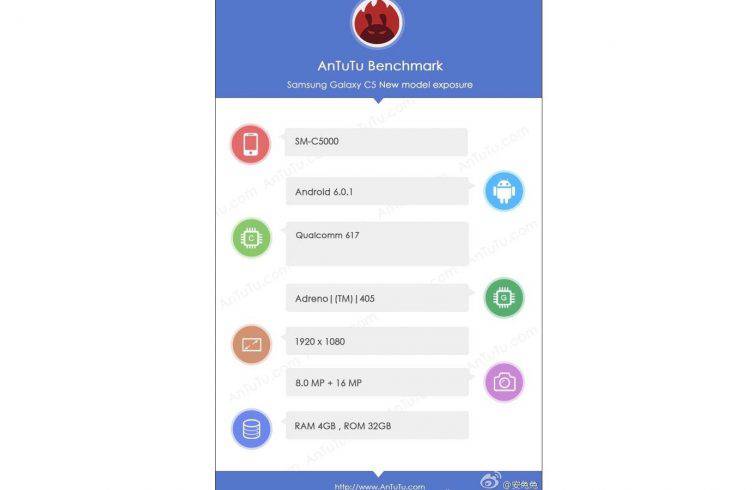