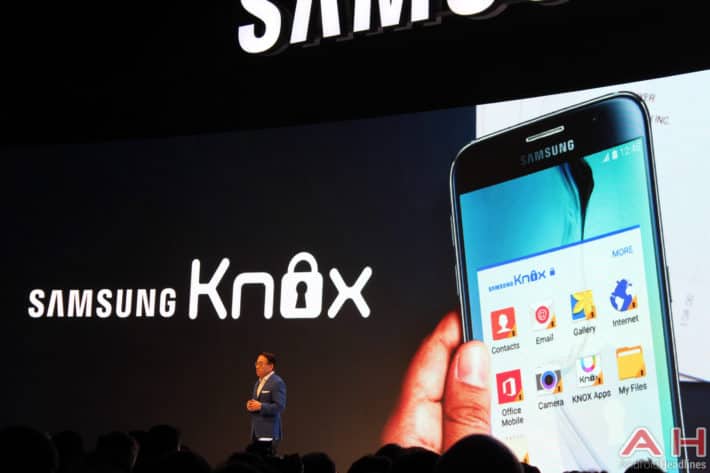 Samsung is mostly known for their manufacturing of consumer electronics and mobile devices, but they also do quite a bit with software as well. Samsung's Knox Security suite has been making it possible for users to integrate personal devices into the workplace, allowing businesses to avoid forcing the use a separate device for work purposes which makes things easier on employees while still being safe and protecting the data of the business as well as personal information of others within the company. Today at Samsung's developer conference they have announced that they will be taking Knox beyond security with a new set of business tools to usher in the new age of enterprise.

This begins with Samsung opening up support for Knox on its own in-house Tizen operating system in a move to make Knox compatible with more platforms in addition to Android. Samsung states that this will allow Knox' security grade protection to be used with more devices like their Gear S2 smartwatch which runs the Tizen OS, which ties in nicely with their plans to open up support for Knox on more devices as well as more platforms. Samsung also plans to open up Knox support on all level of devices and not just high-end handsets, which should mean that more Samsung devices, including those which are listed in the mid-range and low-end tiers, will end up seeing support for Knox in the very near future.

Also part of the expansion, Samsung plans to make Knox and its new business tools the cornerstone of its Samsung Enterprise Solutions and services, which span across the healthcare, automotive, and finance fields as well as others, meaning that all of these solutions will be built on Samsung's Knox software. This is big for Samsung as its efforts with Knox are starting to show more results, as Knox has recently just been approved by the Chinese and French government regulators to be used as the security suite for government and businesses in the regions. Now with Knox expanding beyond security to evolve the state of the enterprise Samsung is making strides in realizing a more connected future.