Although Samsung’s Galaxy S7 and Galaxy S7 Edge are still very much new devices, having just launched not too much more than a month ago, they are by no means Samsung’s only major devices for the year. Alongside the popular and longstanding Galaxy S lineup is Samsung’s Galaxy Note series, and this year is poised to bring the Galaxy Note 6 to consumers. Early rumors for the device pointed to a potential 6GB of RAM and a 12MP rear-facing camera, likely dual pixel setup) all the way back in February before the unveiling of the Galaxy S7 and Galaxy S7 Edge devices.

Today, a leaked screenshot from CPU-Z rumored to be taken on the Galaxy Note 6 lists off various details about the device. Among them is the rumored 6GB of RAM that was mentioned a couple of months ago, but the screenshot is also more telling, revealing other potential specifications alongside the phone’s memory. The Galaxy Note 6 according to the leak shows it will be powered by Samsung’s own in-house Exynos 8890 processor that is also powering the Galaxy S7 and Galaxy S7 Edge in some variants outside the U.S. The display size is also listed in the screenshot at 5.77-inches, pointing to a 5.8-inch display when the phone launches later on this year.

Much like on the two latest Galaxy S devices and last year’s Galaxy Note 5, the Galaxy Note 6 will allegedly come with a Quad HD display as the pixel count listed for the screen in this leak shows 1440 x 2560, and it’s detailed to be coming with 32GB of onboard storage. Although it isn’t listed in the screenshot, it’s also likely that the Galaxy Note 6 will have expandable storage just like the Galaxy S7 and Galaxy S7 Edge as there would be no reason for Samsung to leave it out now that they have reintroduced it to their flagship device. Screen density will supposedly be 480 dpi and although not shown, the Galaxy Note 6 should be running Android 6.0 Marshmallow with Samsung’s latest version of the TouchWiz UI layered on top. Also not pictured are a rumored IP68 certification and a 3700mAh battery for the device. Lastly, the model number for the Galaxy Note 6 is suggested to numerous variations of SM-N930F, which is listed at the top of the screenshot. 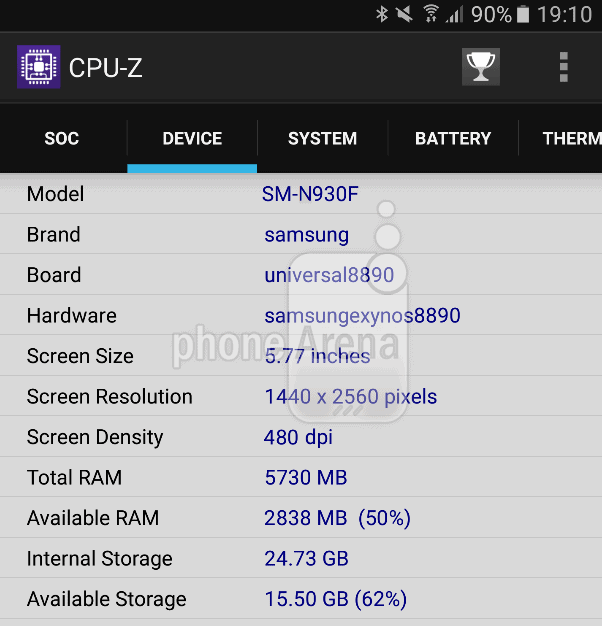