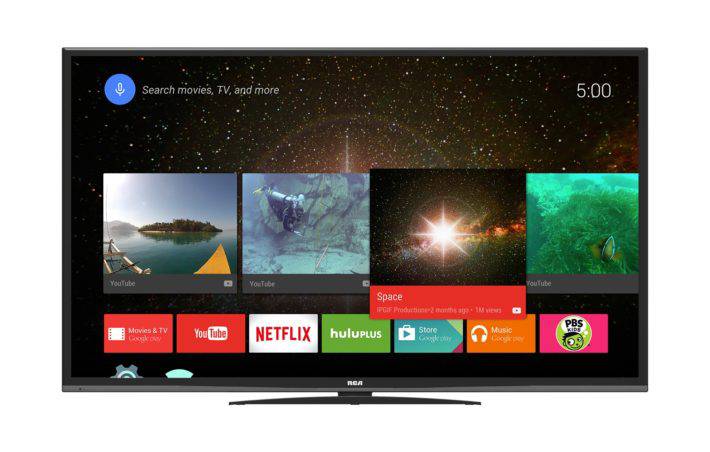 Android TV as a platform, is a little on the limited side. While the availability of compatible apps is getting better, the actual availability of hardware products that run on Android TV is still far too limiting. A landscape which has quickly allowed the NVIDIA SHIELD to dominate the market and establish itself as the go-to Android TV option for many. That said, the built-in market (where Android TV comes as a function included on a TV set) is seeing some decent growth and now another long-awaited option is arriving thanks to RCA.

The TV maker has now announced that their Android TV sets are arriving in June and will be available from a number of major retailers including the likes of Wal-Mart, Target, Sears and so on. The TV sets will come in two different lines which mostly differ in their general build and design with the standard version said to be sporting a "slim line modern high-gloss black cabinet" while the premium version will sport a "premium metal slim line" design. As to be expected the premium options will cost more. Besides the inclusion of Android TV functionality, these TV sets will be 4K sets and will also include Bluetooth connectivity for connecting additional controls and gaming pads wirelessly. Both the standard and premium ranges will come powered by a MediaTek Quad-core processor (clocking at 1 GHz) along with a Mali T624 processing the graphics.

In terms of the pricing, the different models on offer will all be very competitively priced. The smallest will be a 50-inch model which will become available for $499, although the premium design version will be available for $599. Up next there will be the larger 55-inch model which will cost an additional $200 ($699) or at $799 for the premium design version. While closing out the list will be a 65-inch which will be priced at $999 or $1099 for the premium design version. As mentioned, these sets are due to commence their availability to buy from June. You can see an example of how the two lines look and the differences between them in the images below. The 'premium' version is the one on the right.