Do we have a good one for you today – the Motorola Moto X Pure Edition goes up against the Samsung Galaxy S7 to see just which device boasts the best specifications and overall package.  Release this past fall; the Moto X Pure Edition is the US version of Motorola’s Moto X Style.  Does it have the necessary specifications, features and pricing to beat out the Galaxy S7?  While both devices have a solid build quality, the Galaxy S7 with its sculptured metal and glass construction is the clear winner in premium looks and feel, but then, there is a big price difference.  We will first look at the similarities between these two devices and then look at each one in more depth.

The Moto X Pure Edition and the Galaxy S7 have very few things in common. Both displays use the QHD resolution of 2560 x 1440 pixels, but are not close in size – 5.7-inch on the Moto and 5.1-inch on the Samsung.  They both use a Snapdragon processor, but extremely different models and they both have a 32GB or 64GB variation, and they both offer memory expansion via a microSD card.  Both devices repel water, although the Pure Edition only has a nano-coating, and the Galaxy 7 has the full IP68 certification.  The main camera areas are vastly different; however, they both use a 5MP front-facing camera for selfies or video chatting.  Both have 3000mAh non-removable batteries, but they both offer quick charging options.  The Pure Edition and Galaxy S7 have the usual suspects – WiFi, Bluetooth (v4.1 on the Pure Edition and v4.2 on the S7), GPS, NFC and a microUSB port v2.0 for charging and data transfer. One glaring absence from the Pure Edition is the fingerprint sensor for unlocking the device and authorizing mobile payments.

Please take a careful look at the detailed Specifications Comparison chart below and here you will see just how these two great devices stack up against one another – click on the “View Full Comparison” link at the end of the chart to expand the details. After that, we will look at each device in greater detail and point out some of its pros and cons. From all of this information, we will try to determine the winner based on specs and execution of design and functions. 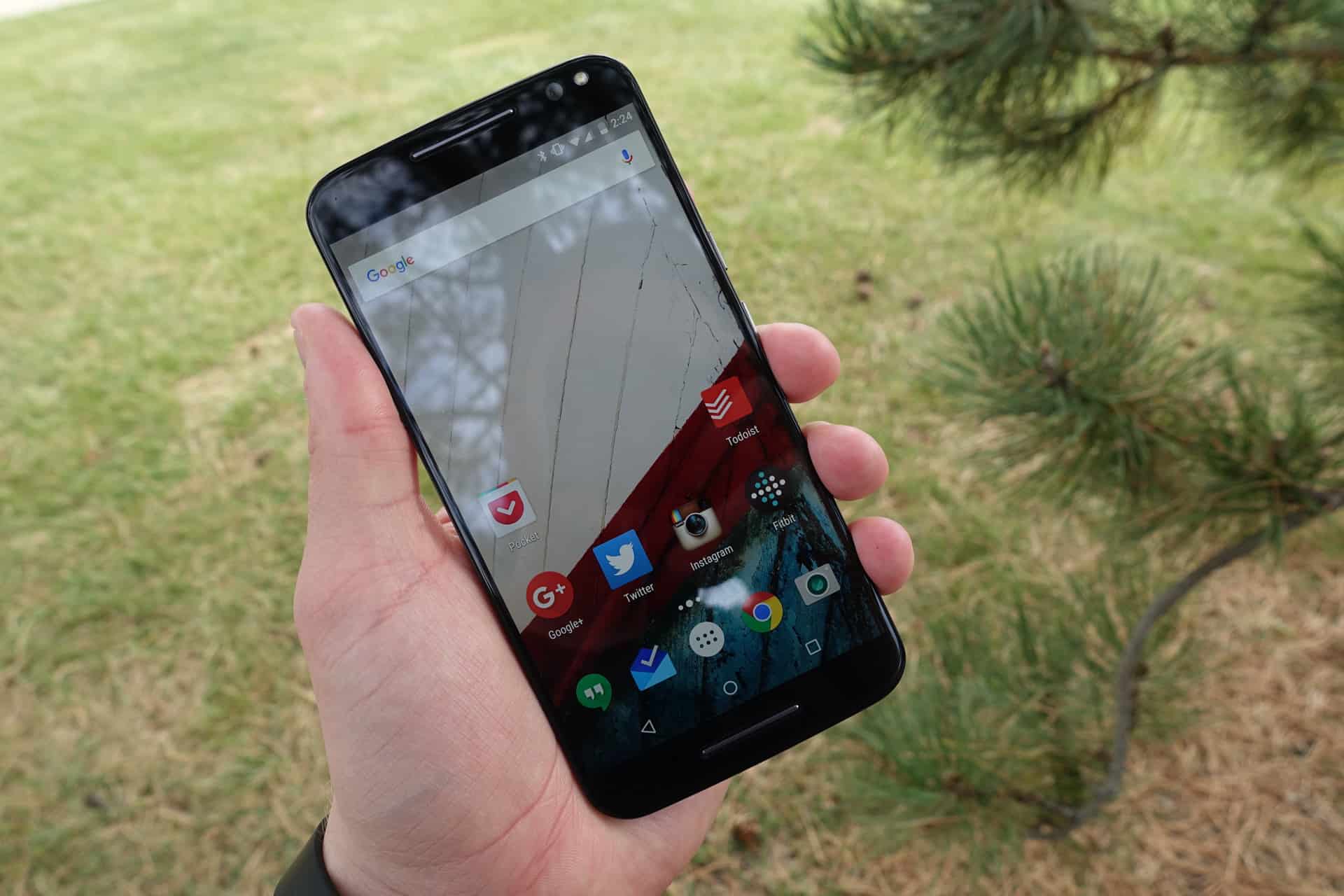 In September 2015, Motorola released the Moto X Pure Edition for sale in the US and the Moto X Style for everywhere else.  Motorola took the last Moto X and made improvements in just about every area – a larger display, higher resolution, a much better camera, a 64-bit processor and more memory – it was everything the Moto X needed.  The only thing missing is a fingerprint sensor for authorizing mobile payments.  The Moto X is in phablet territory with a large 5.7-inch display but retains its full-metal frame and curved backing making it comfortable to hold.  But just how does it hold up to the new metal and glass Samsung Galaxy S7?

Motorola chose a large 5.7-inch LCD display with a QHD resolution of 2560 x 1440 pixels and 520 pixels-per-inch (PPI).  Motorola went with Qualcomm, but bypassed the Snapdragon 810 and chose their 64-bit Snapdragon 808 hexacore processor with the quad-core clocked at 1.44GHz and the dual-core clocked at 1.8GHz.  The Moto X comes with 3GB of DDR3 RAM (the 808 does not support DDR4) and a choice of 16GB, 32GB or 64GB of internal memory with a microSD card slot for expansion to 128GB.

Motorola started to take the camera area more seriously after they worked on the Nexus 6 – up until that time, Motorola has never had a great camera.  Thankfully, this trend continues with the new Moto X and they jumped up to a huge 21MP sensor and then added quick phase detection autofocus, a dual-tone LED flash and a f/2.0 aperture.  The Moto X even includes a 5MP FFC with a f/2.0 aperture and a wide-angle lens for great selfies and video chatting.  The Moto X uses a 3000mAh non-removable battery that comes with rapid charge capabilities.

The Moto X Pure Edition includes front-facing stereo speakers with Smartboost for a great new sound.  Motorola also includes the IP52 water repellency in the Moto X – not up to the challenges of the IP68 in the Galaxy S7.  Motorola sells the Moto X as an unlocked device that can work on all the major US networks.  With an almost a pure Android experience – currently, 6.0 Marshmallow – you should receive some of the fastest updates possible.  It will be interesting to see how Lenovo handles future updates now that they own Motorola Mobility.  Moto gave it a great starting price of only $399.99

The Samsung Galaxy S7 keeps its same size display while the outside of the S7 does not physically look too differently from the Galaxy S6 it replaces.  A couple of subtle changes are there if you look close enough – the top front of the device slopes down ever so much to make it easier to hold up to your ear and the sides are slightly curved to make it easier to pick the S7 up from a flat surface.  Most of the changes or upgrades are inside the device.  Does that take away from the excitement of the Galaxy S7 arrival – most definitely?  However, the Galaxy S7 is still an appealing device with that body of curved metal and glass.  In this comparison, we are looking at specifications and the innovations of these two devices, so let’s take a closer look at the new Galaxy S7.

The Galaxy S6 had an award-winning camera, but Samsung did a major overhaul to the camera area of the Galaxy S7.  Last year’s popular 16MP shooter on the S6 models is gone and replaced by a new Dual Pixel 12MP with a larger sensor, allowing it to take in more light and information than the smaller 16MP sensor.  The aperture increased to f/1.7, they included faster phase detection autofocus, auto HDR and retained OIS.  The Galaxy S7 uses a 5MP wide-angle lens, larger f/1.7 aperture and Live HDR for its FFC allowing for great selfies and video chatting.  The S7 includes a larger 3000mAh non-removable battery with quick charge and quick wireless charging as well.

What features distinguishes the Galaxy S7 from the Moto X Pure Edition? The S7 offers IP68 water and dust protection versus the IP52 nano-coating in the Moto X.  While you can use Android Pay, as with the Moto X, you can also use Samsung Pay to make mobile purchases just about anywhere you can swipe a credit or debit card.  The S7 also includes a fingerprint sensor for unlocking the device as well as an easier and more secure way of authorizing mobile payments. The S7 also has a heart rate monitor, oxygen saturation sensor and quick wireless charging.  The S7 measure 142.4 x 69.9 x 7.9 mm and weighs in at 152 grams and is available in Black, White, Gold and Silver, costing about $670, although the carriers are offering many specials at this time – even BOGO.

Okay, we could argue about the $270 price difference all day, but putting it aside, the Samsung Galaxy S7 is the winner of this comparison – especially when we are talking about quality, performance and features. The Galaxy S7 has a much more premium look and feel and beyond that it has the better Super AMOLED 'always-on' display, much better processor and GPU, more RAM and more external storage capability.  It has much better cameras and has a fingerprint sensor, which the Moto X sorely lacks. The S7 adds the IP68 certification, a heart rate sensor, oxygen saturation monitor and quick wireless charging.

The Moto X Pure Edition is a terrific smartphone – if the best display, more performance, no fingerprint sensor or having fewer features is okay with you, then you will be extremely happy…and have an extra $270 in your pocket. However, if you want the best and are willing to pay for it – although there are many bargains now on the Galaxy S7 – then you will settle for no less than the Galaxy S7.