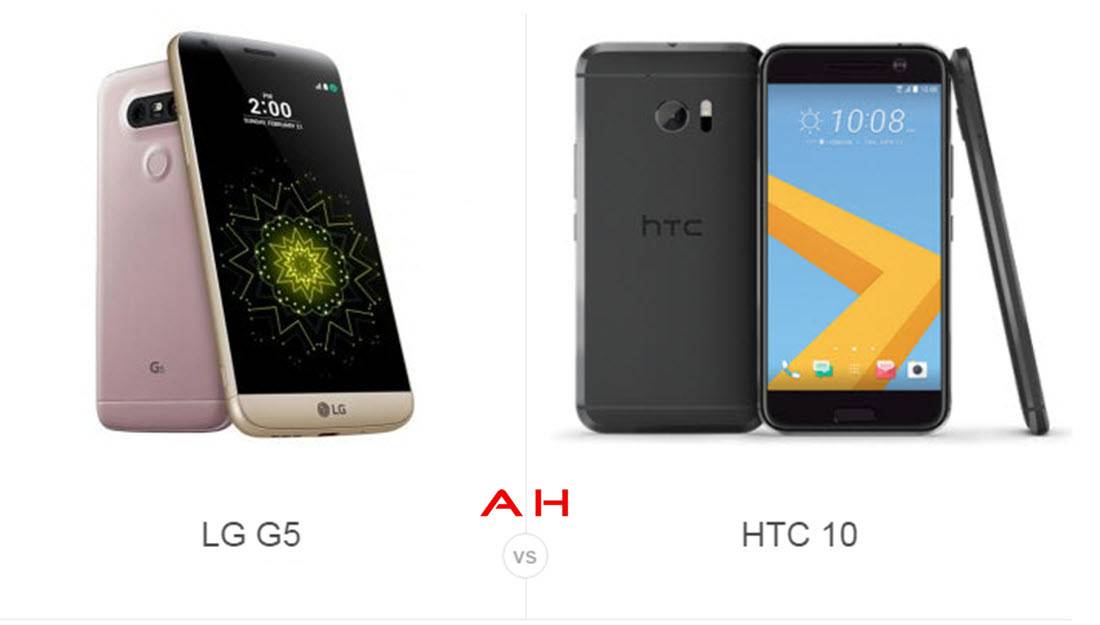 Do we have a good one for you today – the new LG G5 goes up against the new HTC 10.  Here we have two of the most advanced smartphones and draped in all metal bodies vying for the win in this specification comparison.  Both devices are the flagships of LG and HTC, with a solid build quality and a premium look and feel.  This will be a tough decision picking a winner, as there are so many specifications that these two smartphones share – it could come down to personal preference or one or two small things that you might find interesting or useful. Let’s first take a quick look at what these two smartphones have in common and then look at each one in more depth.

The LG G5 and HTC 10 have many things in common, starting with their physical dimensions, which are almost identical along with their weights.  Their displays are so close in size – LG G5 at 5.3-inches and the HTC at 5.2-inches – we might as well say they are also the same size.  Both displays use the LCD technology and Quad HD (QHD) resolutions.  They both use the same 64-bit Qualcomm Snapdragon 820 quad-core processor packing 4GB of DDR4 RAM.  Each device has a 32GB model available, and each is expandable via a microSD card.  The LG G5 and HTC 10 produce great photos but go about it in a different way.  Both devices offer Quick Charge 3.0 for their batteries and the LG G5 and HTC 10 both sport a fingerprint sensor to unlock the device and to authorize mobile payments.

The LG G5 and HTC 10 have the usual suspects – WiFi, Bluetooth v4.2, GPS, NFC, a reversible Type-C port for charging and data transfer, as well as a fingerprint sensor for unlocking the device and authorizing mobile payments with Android Pay.

Please take a deliberate look at the detailed Specifications Comparison chart below and here you will see just how these two devices stack up against one another.  Click on the “View Full Comparison” link at the end of the chart to expand the details. After that, we will look at each device in greater depth and point out some of its pros and cons. From all of this information, we will try to determine the winner based on specs and execution of design and functions.

LG went for a bold, new idea and look.  While typical G4 lovers may not even recognize the LG G5 device, I bet they are very interested about this new design of their favorite smartphone.  LG put some thought into its LG G5 – not only did they go from plastic to a metal body – they were able to keep those essential features – memory expansion and removable battery as well as add in some innovation.  Let’s take a closer look at the new LG G5 and see just how the specs and design hold up to the new HTC 10.

The LG G5 sports a 5.3-inch IPS LCD QHD display to which they added the ‘always-on’ display feature.  It packs a resolution of 2560 x 1440 pixels and 554 PPI.  The processor is the newest Qualcomm Snapdragon 820 quad-core processor with a dual-core clocked at 1.6GHz and a dual-core clocked at 2.15GHz with an Adreno 530 GPU to handle even the toughest graphics. The G5 packs in 4GB of DDR4 RAM and 32GB of internal memory, expandable to 2TB via a microUSB card.

Both manufacturers redesigned their camera areas this year. LG went from a single 16MP sensor found on the G4 to one 16MP sensor and then added another 8MP sensor, along with new software on the new LG G5.  The 8MP has a wider angle, allowing the user to capture more in the photo.  The G5 retained the 8MP FFC from the G4 for selfies and video chatting.  LG dropped the battery size from the 3000mAh found on the LG G4 to 2800mAh, but it is still removable and has quick charge capabilities

The new LG G5 is the first smartphone that can use modules – push a button on the lower side, slide out the bottom ‘chin’ of the device along with its battery, and slide in a replacement battery or different modules that add more functionality.  One module brings the battery capacity up to 4000mAhs along with camera controls that make it easy to hold and adjust the camera.  It literally turns the LG G5 into a point-and-shoot style camera.  Another module by B&O provides higher sound quality when you plug in your headset.  LG retained its built-in IR Blaster and added the fingerprint sensor where the rear buttons once resided.  The fingerprint sensor clicks inward and acts as an on/off switch with the volume controls on the side.  LG followed Google’s lead by starting to use the Type-C USB port on the G5.  The LG G5 measures 149.4 x 73.9 x 7.7 mm, weighs in at 159 grams and comes in Silver, Titan, Gold, and Pink.  The LG G5 is available on all the leading US carriers, and it will cost you about $625. 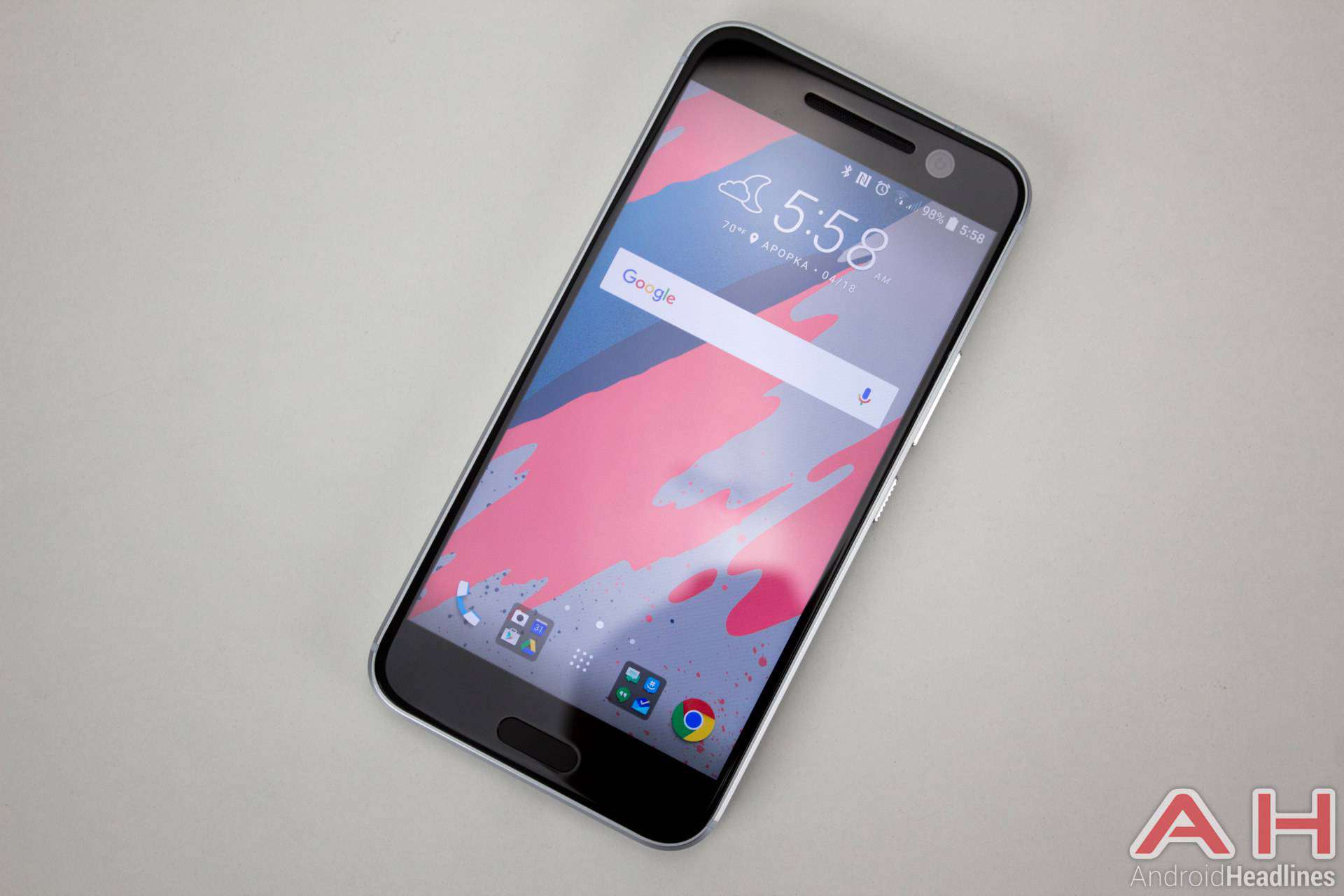 HTC has a very loyal following –ones that love HTC but are just as quick to criticize them for certain design flaws.  HTC owners will defend their devices even when they continued to use FHD displays and settle for less RAM as long as that BoomSound was the best out there.  I am glad to say that HTC loyalists finally have a reason to be genuinely excited – the new HTC 10.  It has it all – a beautifully carved aluminum body, the best technology out there when it comes to processor, GPU and memory expansion, finally a great camera and while it is not the original BoomSound, it still looks like it may offer the best sound found on a smartphone.

HTC finally chose a display with a QHD resolution for their new device.  The HTC 10 sports a 5.2-inch Super LCD5 QHD display with a resolution of 2560 x 1440 pixels and 565 PPI.  HTC went with the top processor on the market and grabbed the 64-bit Snapdragon 820 quad-core processor with a dual-core clocked at 1.6GHz and a dual-core clocked at 2.15GHz.  This processor pairs up with the Adreno 530 GPU, and it should satisfy even the most avid gamer.  The HTC 10 packs a full 4GB of DDR4 RAM and 32GB of internal memory that is expandable to 2TB via a microSD card.

HTC has played around with their cameras more than any other manufacturer the past few years…never actually hitting the mark.  However, that all stops with the HTC 10 as they are using a 12MP for their primary camera that uses UltraPixels to capture more light and image.  They added laser autofocus, a dual-tone LED flash, an aperture of f/1.8 and OIS – this all adds up to a DxOMark score of 88 and ties the score of the Samsung Galaxy S7/S7 Edge as the tops in mobile photography.  They added a 5MP FFC with a f/1.8 aperture, wide-angle lens, screen flash and even OIS to ensure great selfies and video chatting even in low-light.  The HTC packs a 3000mAh non-removable battery with Quick Charge 3.0.

The HTC 10 comes with BoomSound Hi-Fi sound with separate dual speakers, but not the front-facing placement as previous renditions.  The woofer is now on the bottom of the device, and the high-end sounds originate from the earpiece.  It also has Dolby Hi-Res music for your earphone enjoyment.  The HTC 10 is running HTC Sense over Android 6.0.1 Marshmallow and measures 145.9 x 71.9 x 9mm and weighs in at 161 grams.  It comes in Carbon Grey, Topaz Gold, and Glacier Silver and it will cost you about $699 for 32GB of memory. 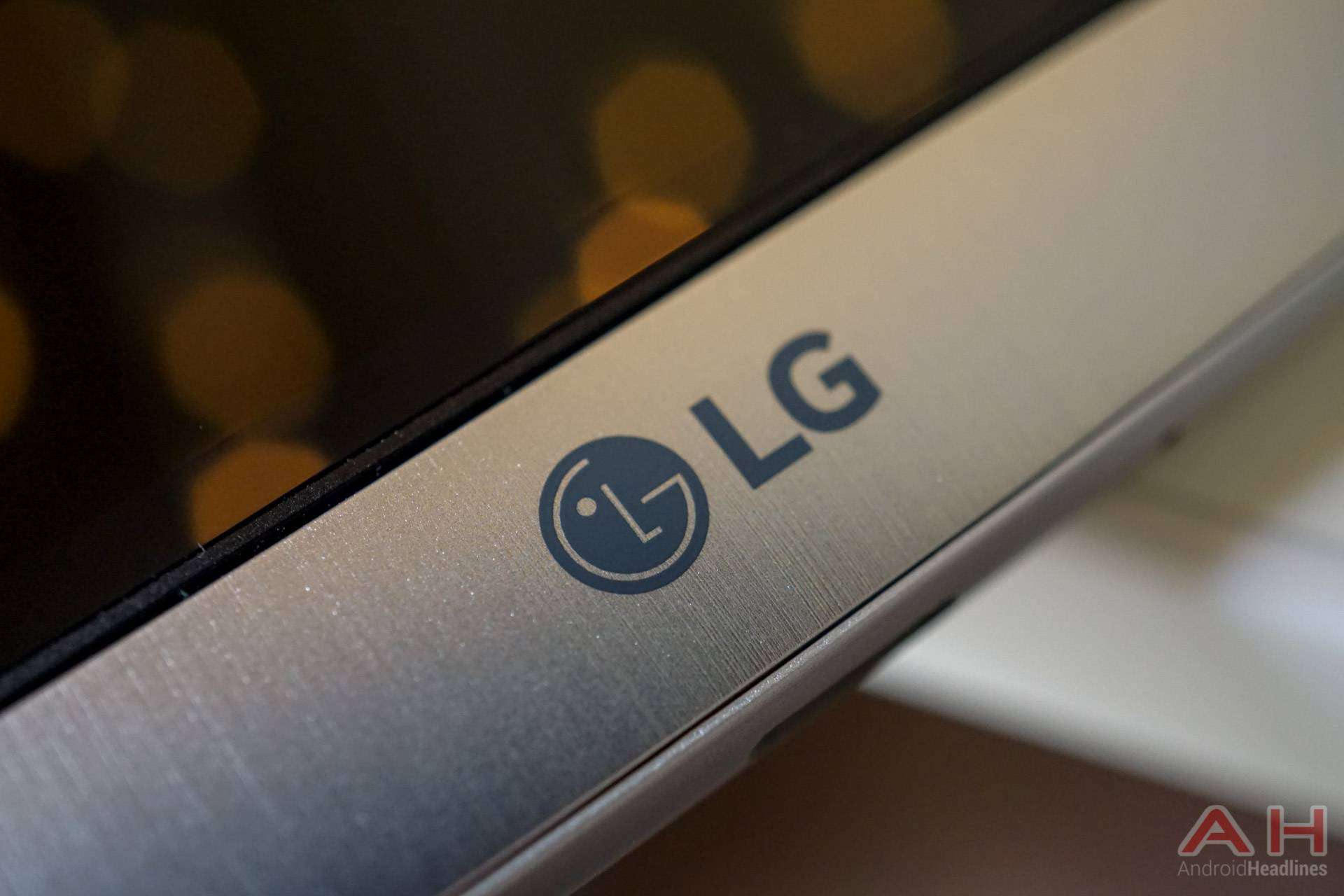 This was one of the absolute toughest comparisons to call, but I am picking the LG G5 as the winner of this comparison for one reason only – its more innovative design. The module idea may come back to bite LG in the ‘chin,’ but it is nice to see a company take a bold, new approach to their smartphone design. Will there be enough modules that interest users?  Will these modules be reasonably priced?  Can the buyers of these modules use them in the next two – three LG designs?  All of these questions and more will help decide if LG’s leap of faith pays off.

The LG G5 and HTC 10 both have the same display resolution and technology. They use the same processor, the same amount of RAM, and they both offer memory expansion.  They both have a great camera area and the usual suspects.  However, the LG G5 also throws in a built-in IR blaster and removable battery and a way to increase battery life via the camera module.

HTC did a great job on the HTC 10 – it looks much better and has all the right parts – but they just did not take that extra step, like LG did. When two devices are as close as these are, we must look to that little bit of ‘extra’ in picking a winner.