Oppo is one of the most popular smartphone manufacturing companies in China. This company has actually managed to sell 50 million handsets last year, which is considered to be quite a success by Oppo. The Oppo R7 and R7 Plus handsets were amongst the most popular devices last year, and Oppo has introduced their successors, the Oppo R9 and R9 Plus, recently as well. Those two devices are off to a great start, and we were wondering what else can we expect from Oppo in the coming months.

Well, pretty much everyone who is interested in Oppo devices has been wondering when will the company introduce the Oppo Find 9. The Oppo Find 7 was introduced back in May 2014, and that handset was one of the highest-end devices in the market at that point. The Oppo Find 7 was quite popular, and the company managed to sell quite a few copies of this phone, so pretty much everyone wondered why didn’t Oppo introduce its successor last year. Well, the Oppo Find 9 didn’t get announced in 2015, but it might see the light of day soon. The Oppo X9009, a possible Oppo Find 9, surfaced on Geekbench quite recently. Now, looking at this listing, we’re inclined to believe this is a ‘lite’ version (Find 9a perhaps?) of the Oppo Find 9, or something similar to that. The listed SoC here is MediaTek’s Helio P10, which is a mid-range 64-bit octa-core processor, and that just doesn’t fit. The Oppo Find 9 is supposed to be a high-end product, so we’re expecting it to come with the Helio X20 / X25 or Snapdragon 820. Anyhow, the listing also reveals that the device will ship with 4GB of RAM and Android 5.1 Lollipop out of the box, though we’re hoping Oppo will include Android Marshmallow before this device launches. This handset managed to score 807 points in the single-core, and 3,228 points in the multi-core benchmark on Geekbench, as you can see in the provided image.

There you have it, this might not be the high-end Oppo Find 9 we were hoping for, but it could be the Oppo Find 9a, a somewhat more affordable variant of Oppo’s upcoming flagship. Either way, stay tuned, chances are we’ll hear more about this handset in the coming weeks. 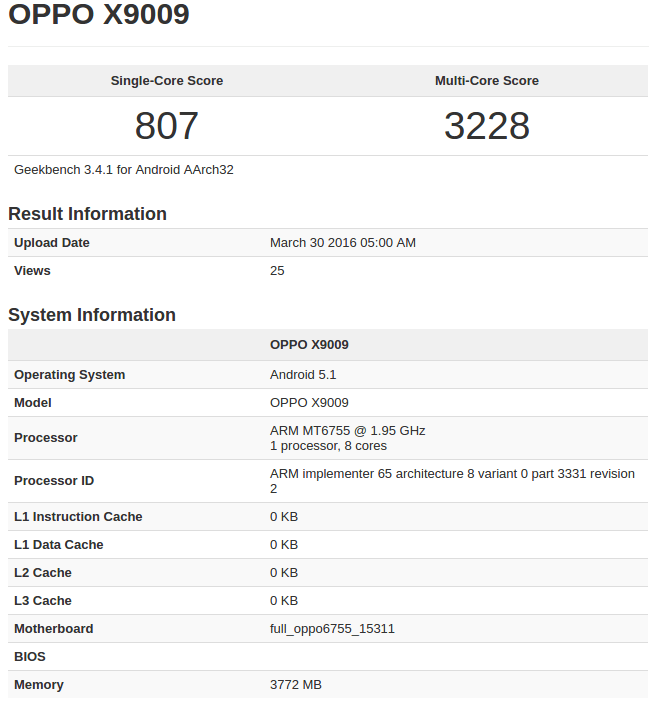