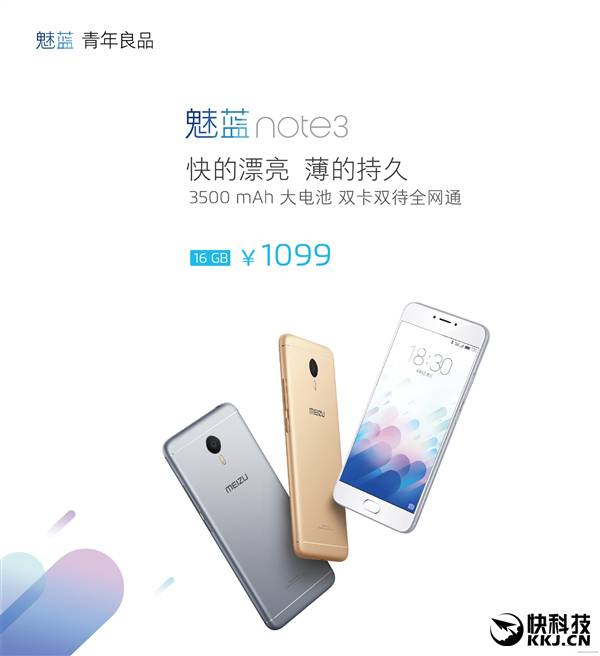 Two Meizu events are right around the corner. The company will host one event on April 6th (tomorrow), and the second one on April 12th. The company is planning to unveil the Meizu M3 Note mid-range handset tomorrow, while their new flagship (MX6 or PRO 6) will be announced on April 12th. That being said, the Meizu M3 Note has surfaced alongside the PRO 6 the other day, and the company has confirmed that the phone will be made out of metal in yesterday’s official teaser.

That being said, another M3 Note leaked surfaced recently. This time around, we get to see not only the design of this handset from both front and back, but also its pricing, and battery capacity. If this leak is any indication, the Meizu M3 Note will pack in a rather big 3,500mAh battery on the inside, and will cost 1,099 Yuan ($170) for the 16GB storage model. Now, as far as the design goes, this leak goes hand-in-hand with what we’ve seen thus far, and Meizu’s teaser image that surfaced yesterday. The M3 Note will be made out of metal, and it will resemble Meizu’s previous smartphones. The device will sport the metal unibody design, and both its power / lock and volume rocker buttons will be placed on the right, while you’ll find the physical home key (mBack) below the display. This home buttons will, presumably, include a fingerprint scanner on the inside.

As far as specs are concerned, the Meizu M3 Note is expected to sport a 5.5-inch fullHD (1920 x 1080) display, along with 2GB / 3GB of RAM, and 16GB / 32GB of internal storage, the 64GB model is highly unlikely. The device will be fueled by MediaTek’s Helio P10 64-bit octa-core processor, and the Mali-T860 GPU will be included here as well. The 13-megapixel snapper is expected to be available on the back of this phone, and a 5-megapixel shooter will be placed up front. Android 5.1 Lollipop will quite probably come pre-installed here, with Meizu’s Flyme UI available on top of Google’s OS. On top of all this, you can also expect two SIM card slots to be available here, and one of them might double as a microSD slot as well.