Before LG unveiled the LG G5 at Mobile World Congress in Barcelona, the company’s first smartphone announcement for 2016 took place in January at CES in Las Vegas. There, the Korean tech giant introduced its new mid-range lineup dubbed the “K” series, consisting of several smartphones including the LG K7 and LG K10. The two aforementioned handsets are now heading for a market release in India, where they have been officially confirmed for a market release on the 14th of April.

Starting off with the slightly smaller and more price-conscious LG K7, the smartphone is equipped with a 5.0-inch IPS LCD display with a resolution of 480 x 854, which leads to a pixel density of roughly 196 pixels per inch. It would appear that LG intends on releasing the 4G LTE variant in India, which means that, inside, the gadget should sport a Qualcomm MSM8909 Snapdragon 210 SoC featuring a quad-core processor clocked at 1.1 GHz per core, 1.5 GB of RAM, and 16 GB of internal storage, expandable via microSD by up to an additional 32 GB. In the media department, the LG K7 offers an 8-megapixel camera coupled with an LED flash, and a 5 MP front-facing sensor with 720p video recording capabilities. All the components rely on a 2,125 mAh battery, and the smartphone runs Android 5.1 Lollipop out of the box.

The LG K10 is a slightly more powerful mid-range terminal equipped with a larger 5.3-inch IPS LCD display, featuring a resolution of 1280 x 720 and a pixel density of about 227 pixels per inch. It would appear that the LG K10 variant waiting to be released in India will feature 2 GB of RAM, as well as a Qualcomm MSM8916 Snapdragon 410 SoC sporting a 1.2 GHz quad-core CPU and an Adreno 306 graphics chip. Users will have 16 GB of on-board storage at their disposal expandable via microSD, and photography enthusiasts will rely on a 13-megapixel main camera as well as a 5 MP front-facing shooter. Otherwise, the smartphone is equipped with a 2,300 mAh battery and runs Android 5.1 Lollipop. Both the LG K7 and the LG K10 will hit the shelves next week on April 14, but as yet the retail prices remain unspecified. 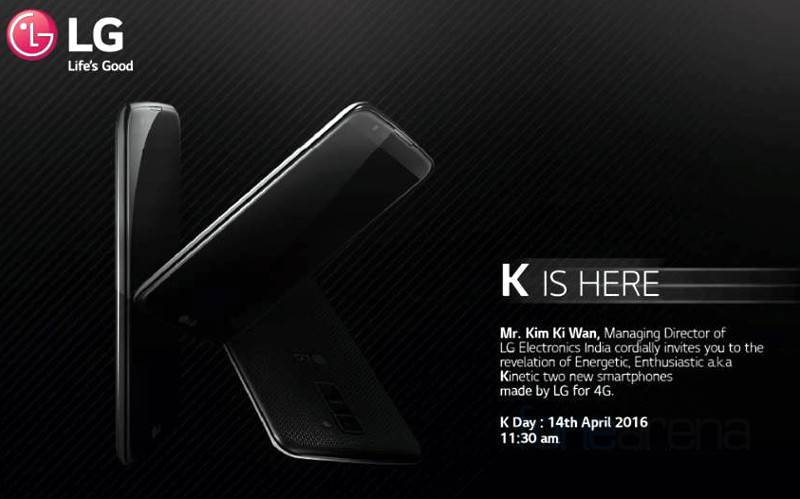