LeEco is a Chinese company which has introduced five smartphones thus far. They’ve unveiled their first smartphones back in April last year, and the company has already announced a press conference for April 20th, which is tomorrow. LeEco has been teasing their upcoming Le 2 handset for quite some time now, they’ve released a teaser which suggests that the phone won’t sport any bezel on the sides, and the company’s exec has shared some sample shots taken with this device.

That being said, the Le 2 has surfaced on both GFXBench and AnTuTu last month, and it has been certified by TENAA (China’s equivalent to the FCC) about a week ago. Well, the device has once again surfaced on GFXBench, but it seems like we’re looking at the ‘Pro’ variant here, as it sports an upgraded SoC and RAM. The LeEco Le 2 (X620) which has popped up on GFXBench last month featured 3GB of RAM and MediaTek’s Helio X25 64-bit deca-core SoC (which seemed odd to begin with because Meizu has exclusive rights to that SoC for the time being), and now the LeEco Le X820 surfaced with 6GB of RAM and Snapdragon 820 64-bit quad-core processor. The Le X820 is quite probably the Le 2 Pro variant, and this will essentially be the company’s all-new flagship. Anyhow, the LeEco Le X820 features a 5.5-inch QHD (2560 x 1440) display, and a 21-megapixel snapper on the back. The 8-megapixel camera will be available on the front side of this device, and Android 6.0.1 Marshmallow will come pre-installed on the phone with LeEco’s custom UI available on top of Google’s OS.

So, we’ve seen a couple of different variants of LeEco Le 2 device thus far. The variant that surfaced on AnTuTu featured the Snapdragon 652 SoC and 3GB of RAM, the one which popped up on GFXBench last month sported the Helio X25 SoC and 3GB of RAM, and the one that was certified by TENAA came with the Helio X20 processor and also 3GB of RAM. The LeEco Le X820 which we talked about today is the most powerful model we’ve seen thus far, and it will be interesting to see what will LeEco announce in the end. We’re rather sure the company will release the Le 2 and Le 2 Pro handsets, and we might even see the Le Max 2 announced at the company’s event tomorrow. 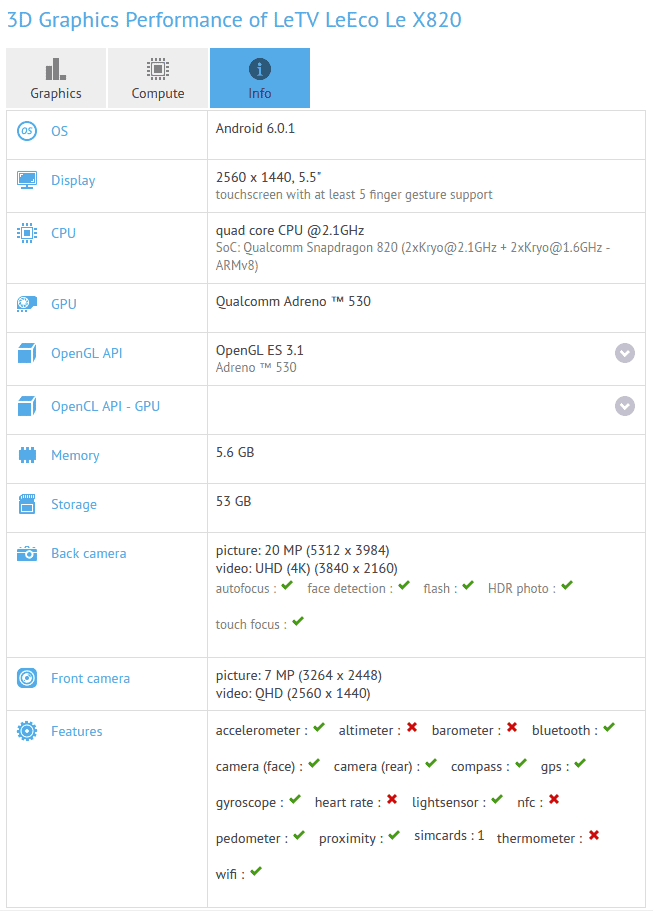