April didn’t use to be so filled with various mobile-related press events, but it’s different this time around. Huawei, CREO, Meizu (x2) and HTC are all going to announce new devices this month. That being said, we’ve already talked quite a bit about Huawei’s upcoming P9 handset, and its two siblings, but new info just keeps on popping up. Huawei’s official has just confirmed something rather interesting, read on.

As you might recall, Huawei has partnered up with Leica back in February, one of the best-known names in the camera industry. Rumors surfaced soon after that, guessing which Huawei device will be equipped with Leica’s technology, and various sources guessed Huawei P9 might be the phone to sport such tech. Well, Huawei’s deputy chairman, Guo Ping, basically confirmed that fact during a press conference in Huawei’s Shenzen headquarters. Mr. Ping said the following: “We are going to launch our P9 flagship phone very soon and this is a product that we worked with Leica to produce. We need to work with the strongest partners in this area to provide the best product”. Now, in addition to this, a rather well-known tipster, Steve Hemmerstoffer, shared an image of the Huawei P9’s back. As you can see, Leica’s branding is very much present on the back, and you also get a good look at the dual camera setup we’ll get on that device. The Huawei P9 will be made out of metal, and the rear-facing fingerprint scanner is also present on the back of the device.

The Huawei P9 is expected to sport a 5.2-inch fullHD (1920 x 1080) display, along with 3GB / 4GB of RAM, and 32GB / 64GB of internal storage. The phone will quite probably going to be fueled by the Kirin 955 64-bit octa-core SoC, though the Kirin 950 remains a possibility as well. The phone will ship with Android Marshmallow out of the box, and on top of it, you’ll be able to find Huawei’s very own Emotion UI (EMUI) Android skin. The Huawei P9 Lite and P9 Max will quite probably launch as well on, if the recent rumors are accurate, of course. In any case, mark April 6th in your calendars, let’s see what Huawei has to offer this time around. 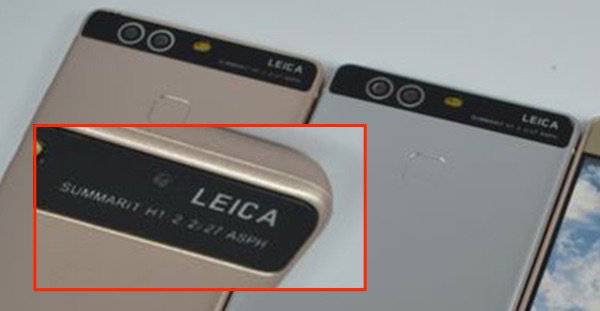