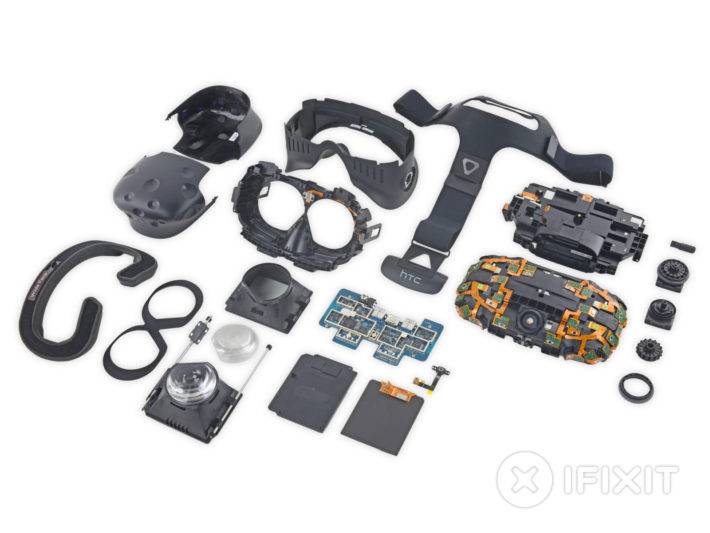 Virtual reality is slowly, but surely, becoming a thing. Back when it first appeared, Oculus Rift was a staggering new gadget which managed to amaze everyone who tried it out. Well, today, we have far more VR Headsets around, though not as many as good as the Oculus Rift. Well, many would say that HTC's Vive VR headset is as good, if not better than Oculus' offering, though we're not here to compare the two. The HTC Vive has been around for a while, but it was released not even a month ago. HTC finally made their Vive VR Headset official on April 5th, and iFixit already managed to get their hands on one set and closely examine it, read on.

Now, for those of you who don't know, HTC Vive is accompanied by two control paddles, and iFixit actually took apart all those devices. If you take a look at the gallery down below, you'll be able to see three iFixit images, and for a full set you'll need to follow the source link down below due to iFixit's policy. Anyhow, it seems like the company rather enjoyed dealing with the HTC Vive as they were able to disassemble it without an issue. The VR Headset received an 8 out of 10 rating from iFixit, which is fairly high. The company found a whopping 32 individual sensors in the Vive, and an additional 24 on each of the controllers. In addition to that, it is worth mentioning that the HTC Vive features somewhat different lenses compared to the Oculus Rift. Oculus' offering sports hybrid lenses, while Vive's have a uniform contour. This essentially means that HTC opted to control focus through adjustment of the eye relief. Now, some of you might know that Oculus uses a desk-mounted camera to track the IR emitters in the headset, well, HTC's Vive functions a bit different than that. HTC Vive sees light from the mounted IR emitters without tracking its location, which is interesting.

There you have it, the HTC Vive has been exposed, you can take a look at every single piece of it if you follow the source link. The HTC Vive is somewhat more expensive than the Oculus Rift, but is also already available for purchase unlike Oculus' offering. The HTC Vive costs $799, while the Oculus Rift comes around at $599.