The HTC 10 (codenamed ‘perfume’) is all set to be announced in just a three days’ time, and as we get closer to April 12th, every day seems to be bringing a new set of information regarding the device that promises to be the next premium smartphone from the Taiwanese tech company. While most of the info regarding the HTC 10 is already out in the open, there are still a few things about the smartphone that are yet to be cleared up. One of those issues is now being addressed by prolific tipster, @LlabTooFer, through a pair of posts on microblogging site, Twitter.

According to the tweets in question, the upcoming handset from HTC will come in two different variants as far as support for wireless frequencies go. While the first model, 2PS620000, is believed to be the international model meant for the EMEA (Europe, Middle East and Africa) markets, the other model, designated 2PS650000, is apparently meant for the U.S. with support for the LTE bands used by American carriers. What’s interesting is that the second version is also the model that is expected be released as the ‘Developer Edition’ of the device, if @LlabTooFer’s tweet is anything to go by. Neither of the two tweets from @LlabTooFer, however, manages to shed any more light on the upcoming HTC flagship.

Just as a recap of what all we already know about the HTC 10, the device is expected to be HTC’s flagship smartphone for this year, and will be launched on Tuesday, April 12th. That’s just three days away, so even if there are a few things that are yet to be revealed about the upcoming handset, it shouldn’t take a whole lot longer for those pieces of information to become public knowledge. We have already read that the handset will have a Qualcomm Snapdragon 820 SoC under the hood along with 4 GB of RAM and either 32 or 64 GB of built-in storage depending on the model. A 5.2-inch QHD display panel is also expected to be a part of the package, but what’s really interesting are reports of Optical Image Stabilization (OIS) for the front camera on the upcoming device. 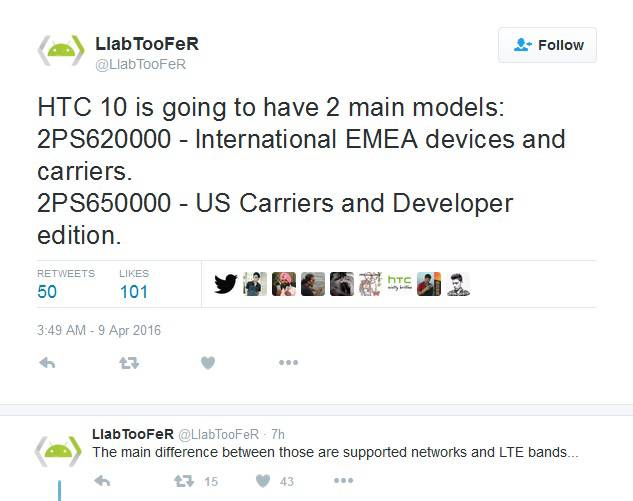