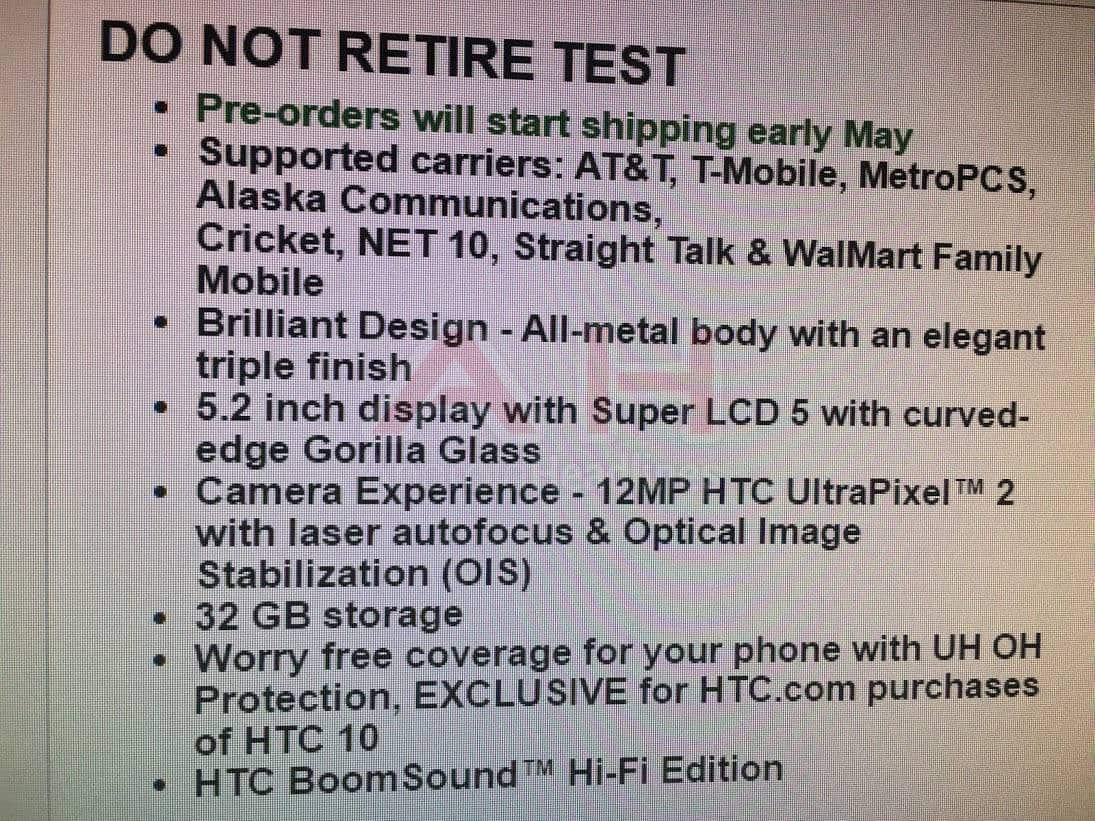 April 12 is when HTC is expected to announce and introduce their latest handset, the HTC 10. Over the last few weeks the HTC 10 has been the subject of a number of leaks including images that have shown off the design of the phone, as well as a number of leaks looking to confirm various specs. The latest of which is now coming through and confirms some already known details, as well as some new ones too. The image is of a HTC website listing and therefore, should be considered to be fairly accurate, pending any immediate changes.

Firstly, the listing does clarify certain already rumored aspects. For instance, the HTC 10 will come sporting a 5.2-inch display. It has also been rumored that the display will be a Super LCD 5 display and that does indeed now seem to be the case. While the listing also mentions that the HTC 10 will come sporting a curved-edge Gorilla Glass display. The rest of the design of the HTC 10 will boast an all-metal body which comes with “an elegant triple finish”. Moving to the rest of the specs and the listing does confirm that the internal storage will be set at 32GB, with no mention of a 64GB model – which had been suggested by a previous rumor. So unless the HTC 10 storage options are region specific (as this information is largely U.S.-relevant), the HTC 10 will only be available as a 32GB model. While there is no mention of microSD card support, it does seem likely support will be included if there is only a 32GB model available. Last but not least, the camera details do confirm previous rumors, with the inclusion of a 12-megapixel rear camera. One which comes with laser autofocus and Optical Image Stabilization (OIS). It has been recently rumored that the front-facing camera will also come with OIS, although there are no details confirming that particular aspect here.

Moving to the more interesting snippets of information and HTC has been making it clear that the audio capabilities of the HTC 10 are a big deal. According to this information, the HTC 10 will come sporting a Hi-Fi edition of HTC’s BoomSound. Recent images and rumors had suggested the HTC 10 will not sport BoomSound, although a teaser from HTC directly suggested BoomSound would be included and now it seems clear that it will be and in the form of an updated Hi-Fi edition. Another interesting aspect is the information regarding supported carriers, which according to the details are largely GSM carriers including AT&T, T-Mobile and a number of MVNOs who piggyback off GSM networks. Why this is interesting is that there is no clear mentioning of support for any CDMA-operated carriers like Verizon and Sprint. Of course, this could be as simple as the listing not being updated fully and will be updated in due course to reflect a wider carrier availability. Or it could be the case that HTC will be cutting down on models this year and will simply release an unlocked version in the U.S. which is compatible with only GSM networks. Either way, as it currently stands, CDMA carrier support is not being listed. It also seems to be the case that UH OH protection will be on offer with the HTC 10, although the listing does suggest that it might be only available to HTC 10 purchases made directly from HTC.

On a very last important point, while the HTC 10 is largely expected to be unveiled on April 12, according to the listing, pre-orders will not begin shipping until early May. Whether this is the first week or the second remains to be seen, but with the middle of May being only a month after the unveiling, you can expect pre-orders to open very soon after the launch and shipping to commence no more than three to four weeks later.