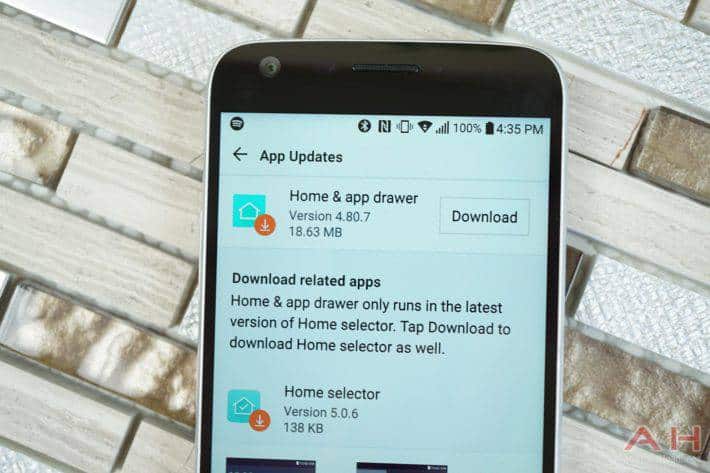 When the LG G5 was unveiled at Mobile World Congress back in February, many people were upset with LG getting rid of the app drawer. So many were upset and voiced their opinion on the matter that LG decided to bring it back in an update. Which they said the update would be available shortly after the launch. Nearly a month later, the update to the launcher is finally here. Users have been able to download the UX 4.0 launcher from LG's Smartworld, or simply install a third-party launcher. Now with this update, you'll have the option to have an app drawer on your LG G5.

The update will add another option under the "Home" section in settings on the LG G5. This option is "Home & App Drawer". So you'll now have three options. One is the home screen without an app drawer, then there's the Easy Mode and now the Home & App Drawer. So if you've been clamoring for that app drawer, but wanted to use LG's launcher – maybe for Smart Bulletin – then head on into the LG Smartworld app to get your download on.

It's nice to have the option of having an app drawer or not. While many, especially hardcore Android users, will opt for an app drawer, it is nice having the choice. Which is something that LG should have let users decide on in the first place, instead of waiting until the end of April to make it available. Samsung also, sorta, got rid of the app drawer on the Galaxy S7 and Galaxy S7 Edge. But the difference was, the option to get rid of the app drawer was pretty well hidden, and part of experimental options in Touchwiz. Which is a much better way of doing things, especially knowing how vocal Android users can be.

If you've picked up the LG G5, you'll definitely want to head into the LG Smartworld, as there are a ton of apps in there that you may want – including the LG Calculator, which is not pre-installed on the LG G5 for some reason. There are also tons of apps and themes available for the LG Home launcher.