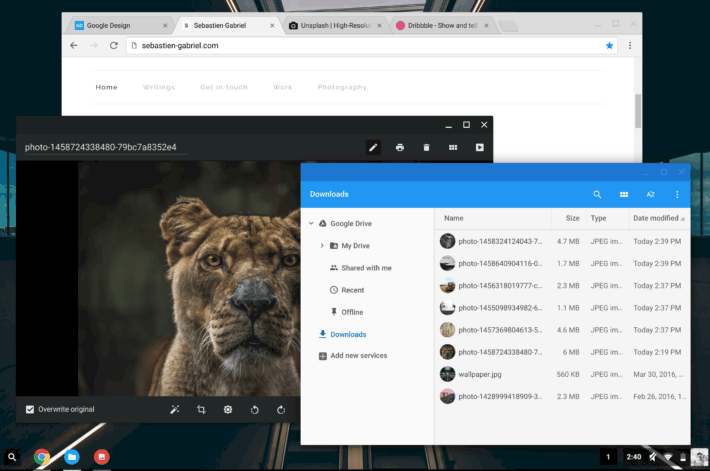 Not too long ago Google recently updated Chrome to version 50, introducing improvements to the way notifications perform as well as a new feature of the browser called declarative preloading which should speed up the preloading process for websites. Chrome 50 also introduced a small handful of material design tweaks which do well to improve the visual appearance of the browser, although most of these changes can't yet be seen on Windows or Mac versions of Chrome. Along with the update to Chrome 50, Google has also recently updated its Chrome OS software and the latest version also brings in bits of material design across the platform, some of which you can see from the main image up above.

One very noticeable visual adjustment can be seen in the new way the downloads window appears, showing off a bright, vibrant, colorful header bar. The window is noticeably flatter, too, which is something that can actually be seen across the whole of the UI on the OS. There's also some changes to the Chrome browser in Chrome OS, with things like the dropdown configuration controls looking flatter and material design inspired. Chrome 50 on Chrome OS also features a full dark theme for incognito mode windows that are opened up which may be to the liking of some users a little bit more than the way that it looked prior to the change.

Aside from the colorful splashes of material design that will now be present in Chrome OS, the development team has also made it so that things scale across Chrome OS devices with different screen resolutions much better than they used to thanks to the interface now being able to render fully programmatically. These visual touches should be viewable as of now on any Chrome OS device if it has been updated along with the Chrome browser itself, and although not quite available on Windows or Mac computers, the material design visual tweaks should be showing up for those versions of Chrome in the not so distant future. It's just a matter of when at this point. Unfortunately, Google hasn't noted exactly when the changes will appear.