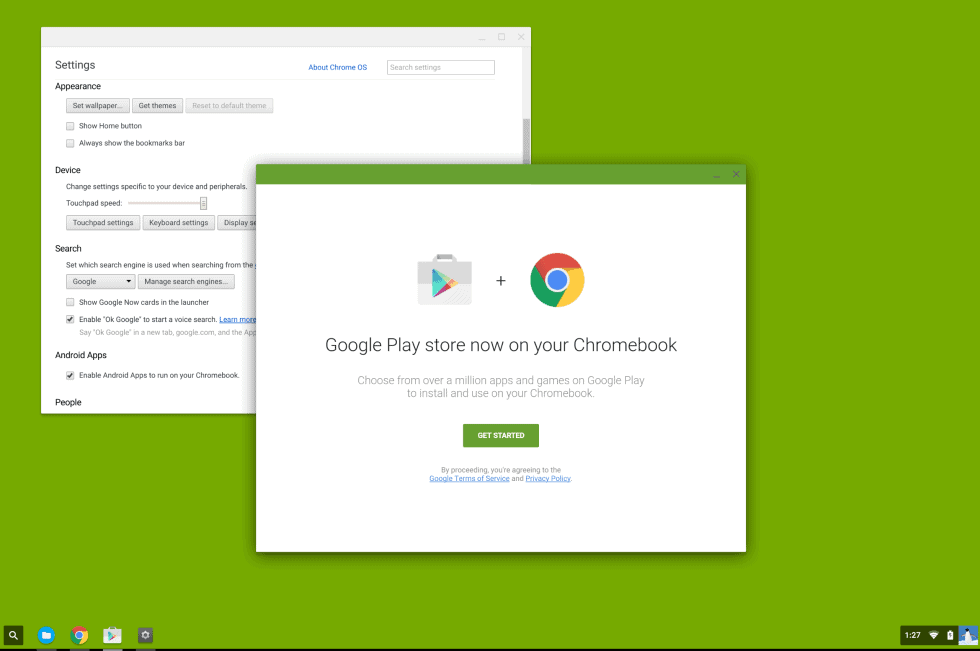 When Google first embarked on their Chrome OS journey with the first Chromebooks, they intended for the system to be all about the browser, all the time. Since then of course, Chrome OS has gained a window manager, a competent file explorer and become its own Desktop OS in its own right. While many apps and extensions now exist for Chrome, the idea of a full program being all that useful on Chrome OS still escapes us. To help in that area, Google started to bring Android apps to Chromebooks, and as more and more of them make their way to Chrome OS, it seems as though Google is ready to bring the entire Play Store to Chrome OS, if this latest find is to be believed, that is.

Google started this off with the launch of the App Runtime for Chrome, often referred to as ARC, and one enterprising Redditor has found evidence of the Play Store coming to your Chromebook. The piece of code (which results in the above screen) points to an “opt-in” dialog box with code that explicitly states a Chromebook by writing “Choose from over a million apps and games on Google Play to install and use on your <ph name=”DEVICE_TYPE”>$1<ex>Chromebook</ex></ph>”. The idea of bringing Chrome OS and Android closer together has been played with for a long time, and now that Sundar Pichai, the man responsible for heading both Android and Chrome in the past is now CEO, his vision for Chrome OS could be closer to being realized.

Android Apps on Chrome OS would make Chromebooks a much more compelling sell to consumers, after all the Microsoft Store on Windows 10 machines lacks all the sort of fun apps and games that the Play Store has in abundance. Not to mention great apps like Google Maps and so on. With Google I/O in a month’s time, we wouldn’t be surprised to see this new initiative of Google’s launch at the show. With new hardware from big names like Acer starting to hit shelves as well, 2016 could be a big year for Chrome OS and Google’s ability to compete with entry level Windows 10 machines.