Samsung has introduced quite a few smartphone this year, including their Galaxy S7 and S7 Edge flagships. These two handsets are already available for purchase all over the world, and it seems like the sales are going as planned for this Korea-based tech giant. That being said, Samsung has released some mid-range offerings as well this year as part of their ‘Galaxy A’ and ‘Galaxy J’ series, and it seems like they’re getting ready to introduce a whole new line of smartphones, read on.

The Samsung Galaxy C5 surfaced on GeekBench a couple of days ago, and judging by the specs shared there, the Galaxy C5 will be a mid-range handset with plenty of RAM (4GB). Well, the Galaxy C7 (SM-C7000) listing popped up recently as well, unlike the Galaxy C5, the Galaxy C7 showed its face on AnTuTu. According to the source, this smartphone will sport a fullHD (1920 x 1080) display, though we still don’t know what size will that panel be, and along with that it will pack 4GB of RAM, just like the Galaxy C5. The Galaxy C7 will also ship with 32GB of internal storage, and it will be fueled by Qualcomm’s Snapdragon 625 64-bit octa-core processor which is accompanied by the Adreno 506 GPU for graphics. The 16-megapixel snapper will be placed on the back of this smartphone, and an 8-megapixel shooter will be available up front. Android 6.0.1 Marshmallow will come pre-installed on the Galaxy C7, and on top of it, you’ll be able to find Samsung’s TouchWiz UI.

The phone is also expected to pack in a fingerprint scanner which will be built into its home button, and the device will be made out of metal. 4G LTE connectivity will also be a part of this offering, and you can also expect Quick Charging to be included in this package. The Galaxy C7 will quite probably be bigger than the Galaxy C5, but we still don’t know what sizes will their displays be. Either way, we’ll let you know as soon as additional info surfaces, stay tuned. 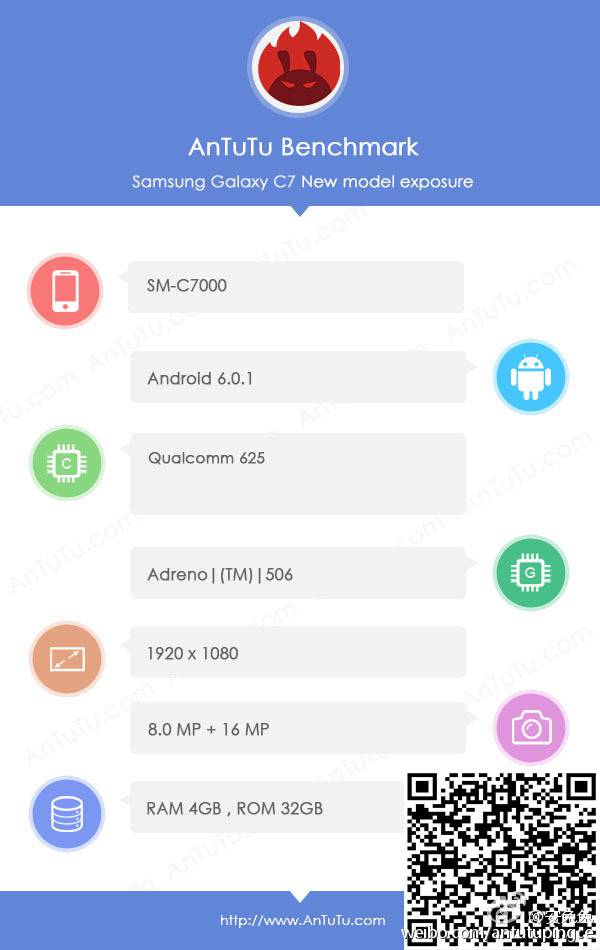