Samsung has introduced their Galaxy S7 and S7 Edge flagships back in February. Those are not the only Galaxy-branded handsets Samsung has rolled out this year though, they’ve also released the Galaxy J1 and Galaxy A9 Pro since January, and by the looks of it, the company will announce more such phones soon. I don’t know if you recall, but both the Galaxy C5 and Galaxy C7 (SM-C7000) have surfaced on various benchmarking sites recently, and now we have yet another such leak to share with you, read on.

The Galaxy C5 has popped up on Geekbench and GFXBench, while the Galaxy C7 was listed on AnTuTu. We’ve even seen the Galaxy C5 cases leak quite recently as well. A new Galaxy C7 listing appeared online quite recently, this device is following in Galaxy C5’s footsteps it seems, as the phone has been spotted on Geekbench as well. This listing confirmed that the device will sport 4GB of RAM, the Snapdragon 625 64-bit octa-core SoC, and that it will ship with Android 6.0.1 Marshmallow out of the box. Now, in addition to all this, the phone’s performance benchmarks were also shared by Geekbench, and the device managed to score 849 points in the single-core, and 4,626 points in the multi-core benchmark test. There are some additional benchmarking info available in the source link down below, in case you’re interested.

Now, based on all the leaked info we have thus far, the Galaxy C7 is likely to be made out of metal, and you’ll also get Samsung’s trademark physical home key below the display. The fingerprint scanner will probably be included on the inside of that physical key, and the device will sport a fullHD display. Aside from the 4GB of RAM and Android 6.0.1 Marshmallow we’ve already mentioned, the phone will ship with a 16-megapixel rear-facing camera, and an 8-megapixel front-facing shooter. The Adreno 506 GPU ships with the Snapdragon 652 SoC, and you’ll also get 32GB of internal storage here, though we still don’t know if you’ll be able to expand that via a microSD card or not. Stay tuned for further info, Samsung is expected to introduce this smartphone in the coming weeks. 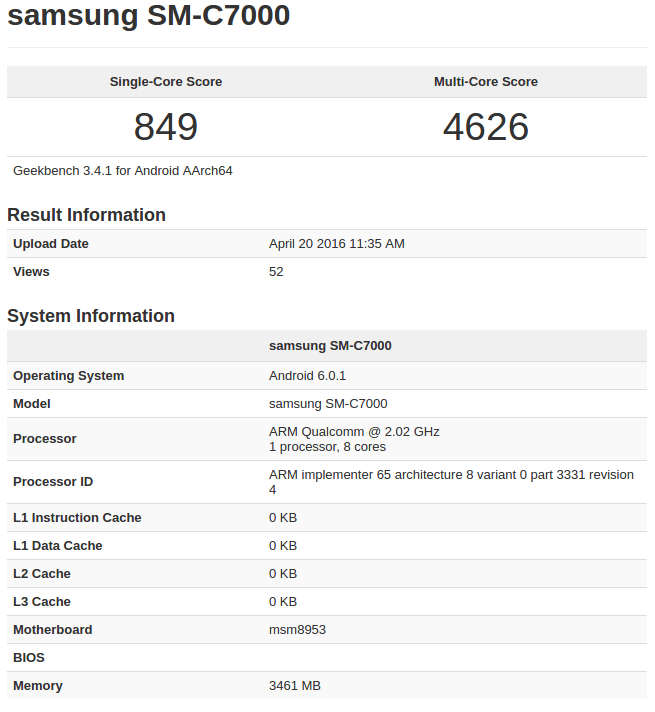