The Bluetooth audio market is one which is exploding right now with a ton of Bluetooth-enabled devices, speakers, headphones and earphones all available to purchase. These typically all come sporting the most up to date and modern technology and are designed to be a sign of the current times. Although, there are a number of products which are available which will help you enjoy the times of old, in a new digital way. The 1byone Bluetooth Turntable is exactly one of those products as this is a turntable, but one which also makes use of modern aspects like USB and Bluetooth compatibility and all at a nicely priced $150. 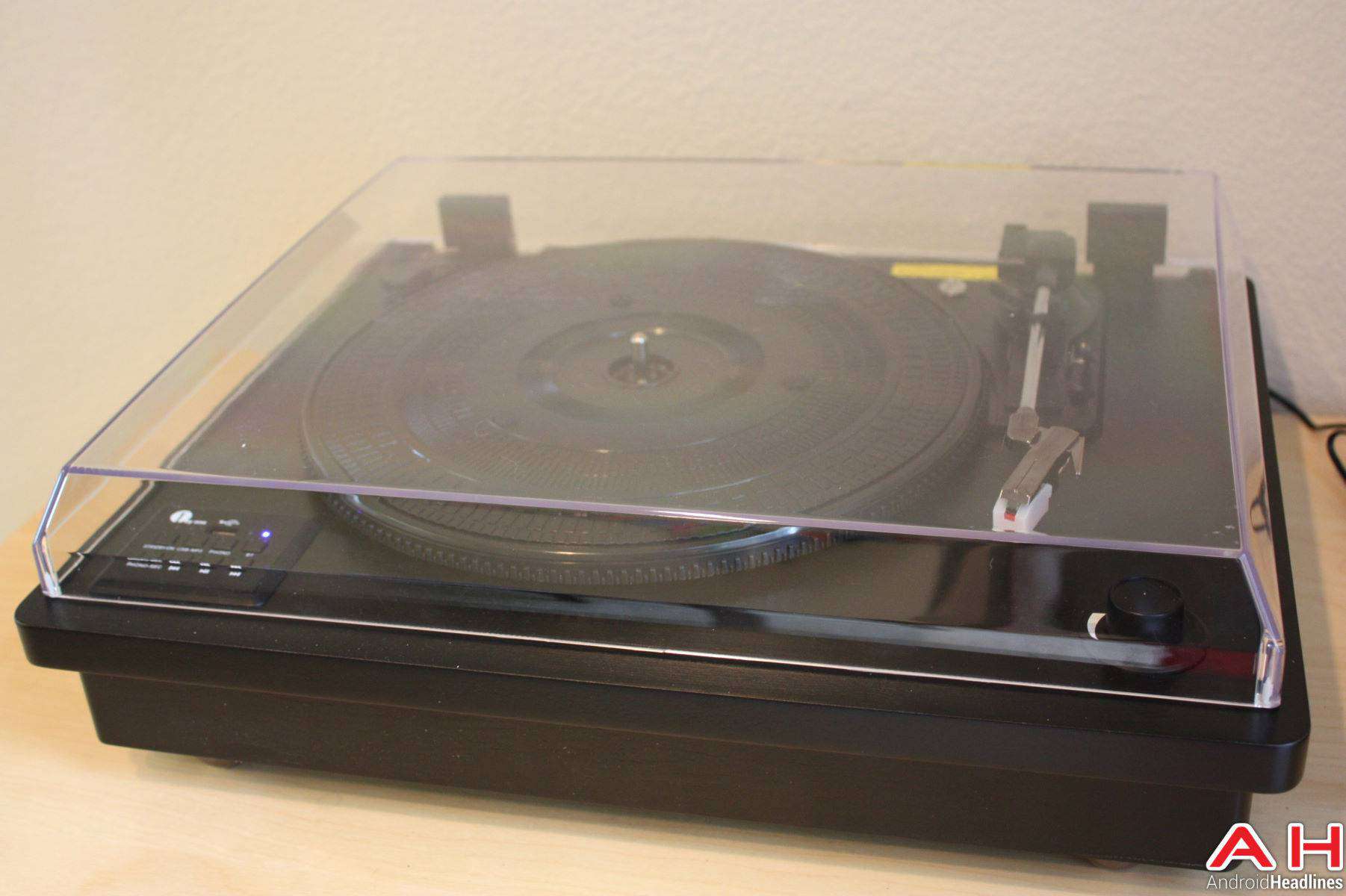 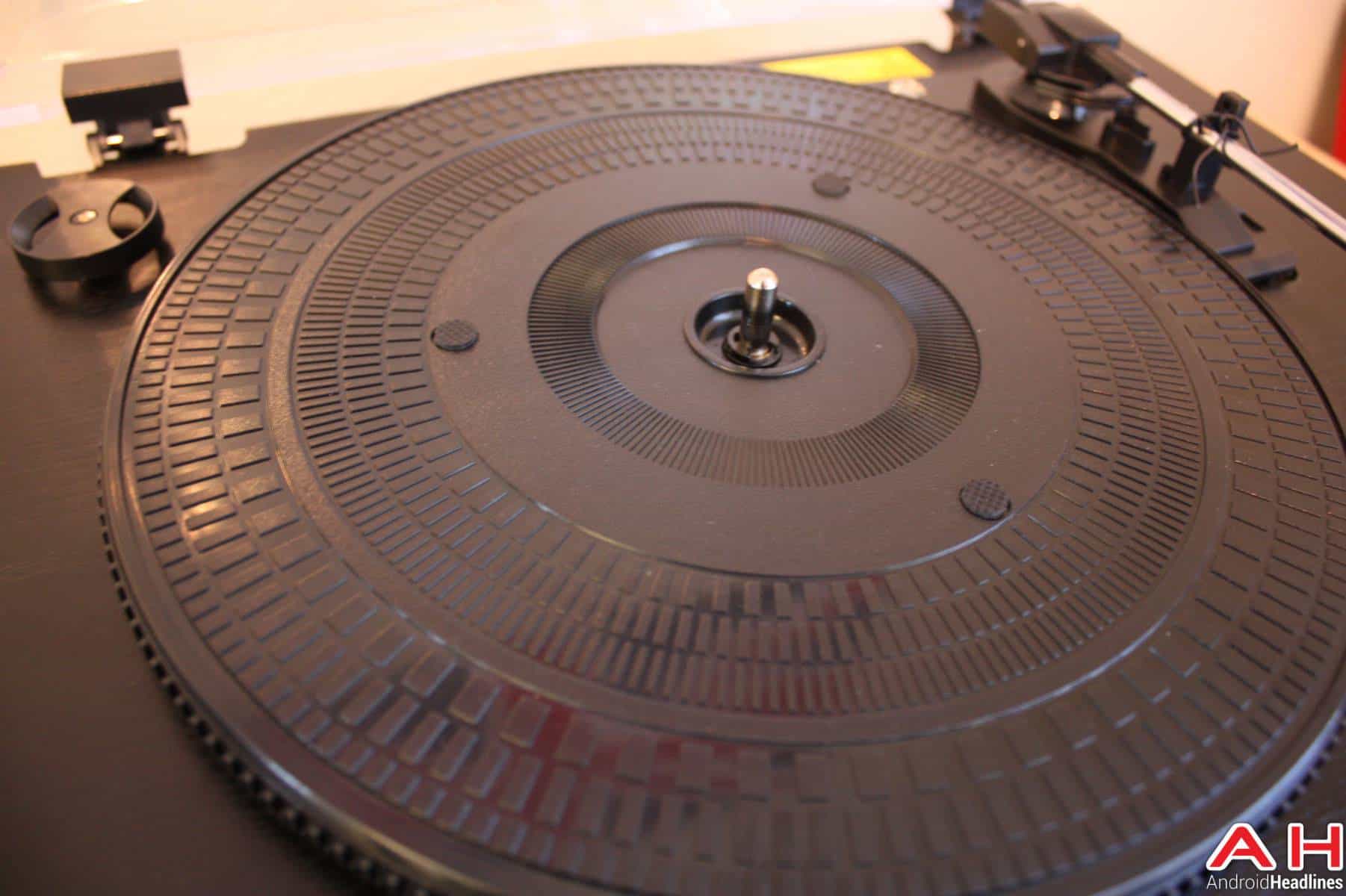 When it comes to turntables, you might think there is not a lot you can comment on in terms of their design. After all, they are all largely squarish boxes with a lid. However, the turntable market is one which is bountiful and there are a number of clear design cues in place. In terms of the 1byone Bluetooth Turntable, this is one which is more towards the basic side of design. So for the serious turntable users out there, this would be considered a lesser design. The 1byone Bluetooth Turntable boasts a wooden base and makes use of a acrylic dust cover. For those that are aware of the difference, the 1byone Bluetooth Turntable is a belt-driven turntable. Which compared to a direct drive turntable, does mean that at some point you are likely going to need to replace the belt inside. Wear and tear with such belts are common and will eventually affect the playback. In contrast, direct drives do not suffer in this respect and do not (usually) require belts or otherwise to be replaced.

The arm and cartridge are also points which should be taken into consideration with a turntable and the 1byone Bluetooth Turntable sports a rather nicely put together arm. As you would expect, this is a latch in place arm, and the fluidity of movement seems to pretty good. There are no overly stiff aspects to worry about and the arm is weighted enough to stay in place. Which is a positive with this turntable, as there are no means to adjust via counterweights. So while it is a little light, it is not too light to cause any playback issues. The cartridge on offer is a generic cartridge, as is the stylus. The good news is that they are both removable, so you will be able to change it out when it starts to loose its playback capabilities or for an alternative (arm fitting permitting). 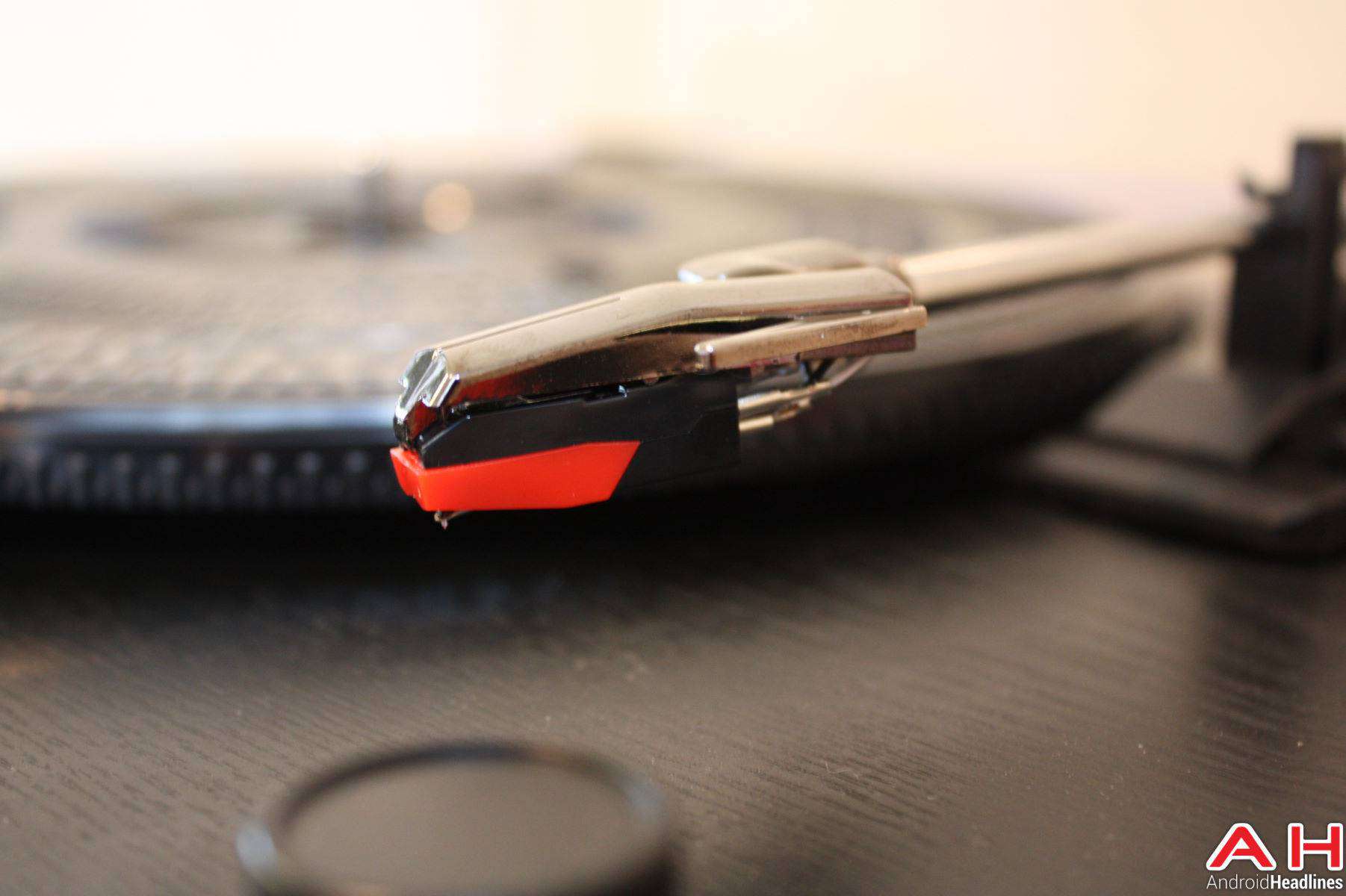 While serious turntable users would likely see the design here as a little basic, it is worth keeping in mind that this is priced to reflect its design and make up. A more serious turntable will easily cost two to three times more than the 1byone Bluetooth Turntable and with that in mind, the design of this turntable is not bad at all. Especially when you then factor in the additional features that are on offer. For instance, this is a turntable which packs in a number of ways in which it can play your music. As well as the standard vinyl player, the top also houses a small control box where you can power on/off the unit, select between connectivity aspects like Bluetooth and also houses a USB slot. Likewise, the front of the unit also includes a volume knob so you can manually control the output volume (of all connections) from the unit itself. 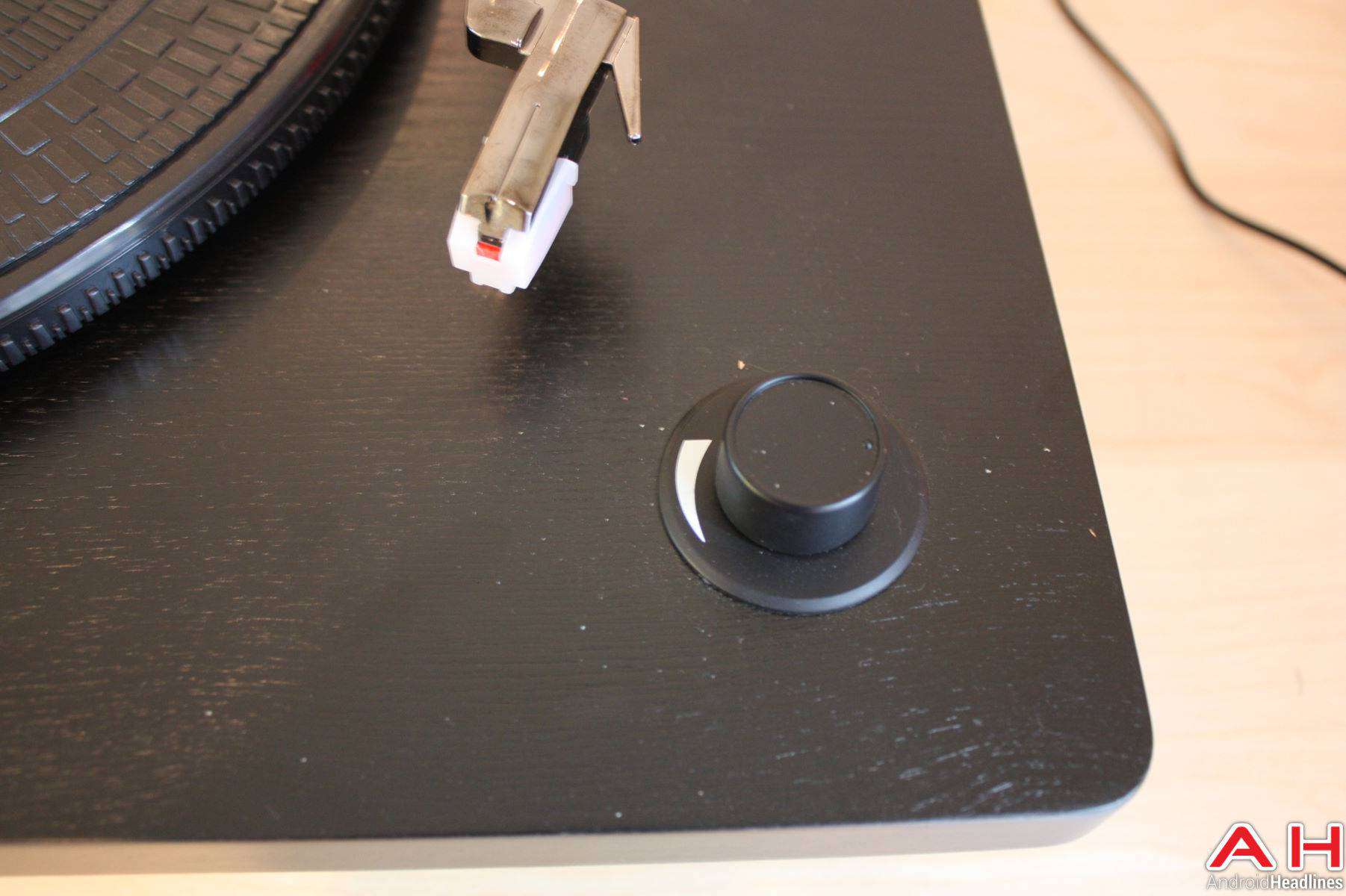 Moving to the back of the turntable and you will find the power supply port, a stereo 3.5 mm line in socket, as well as twin RCA out sockets. 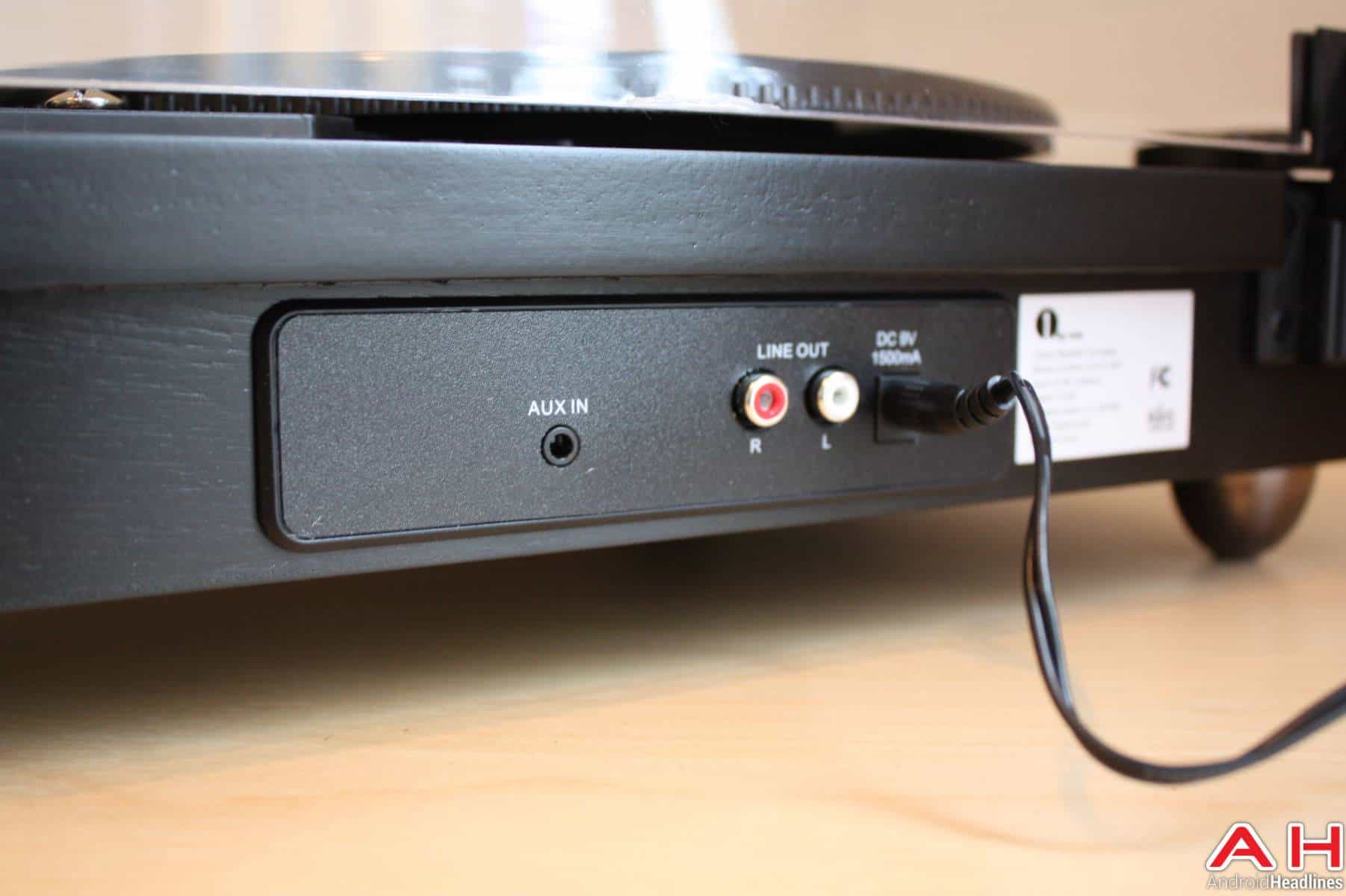 Overall, while the design is a little basic, it is a very neat and organized turntable. 1byone has clearly worked hard to bring together all the elements which are needed to offer both a vintage and modern level of product. And while each area could be criticized individually, the sum of all of those parts does mean that this is overall a very nicely designed turntable. One which will certainly suit a wide range of users and offers an all in one solution to just about any and all audio sources that you can think of. 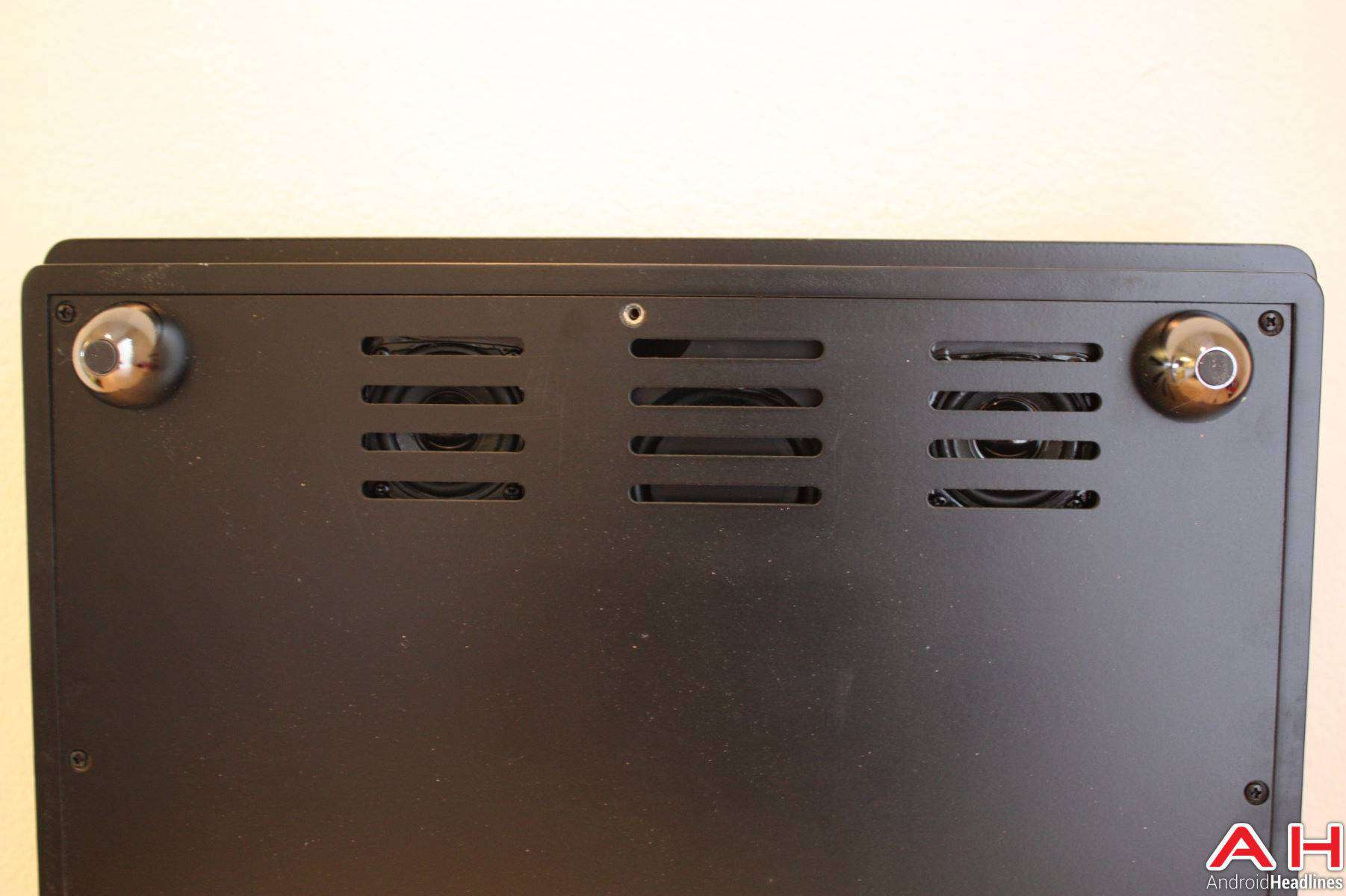 First off, although this is a Bluetooth device, it is not one which makes use of a battery. This is an always-powered product and as such, there are no issues noted in the general performance based on time of usage expected etc. Instead, being a stationed unit means that the general performance was very good with no notable issues. In terms of specifics, as a turntable, the performance of the 1byone Bluetooth Turntable is in line with what you would expect from a turntable priced in this region. The playback is good and solid and the RPM changing works nicely. Speaking of which, one of the big selling points with this turntable is that it is able to record vinyl to digital through the included USB port. This also seems to work pretty well. Although it should be pointed out that recordings do seem to record as an entire recording i.e. when you take the USB to your computer, you will find you have one MP3 file which is the length of the entire side of the vinyl. Although you can quite easily and manually fix this with editing if wanted. Likewise, if you are only recording single songs, this won’t be an issue.

Moving on to the sound quality and this certainly can be talked about in more detail. While most turntables require additional hardware, this one comes equipped with its own internal speakers, which will be a massive positive for those looking to save on space or just a more inclusive unit. The actual sound quality is surprisingly pretty good. In spite of being rather small speakers which do not directly face the listener (bottom positioned as shown in the above image), the quality on offer will surprise you. Especially in terms of volume. For the product that this is, the 1byone Bluetooth Turntable is extremely loud. That said, the scope and frequency range is a little more limited. After all, this is only a two way output and does not mean that the mids are a little more squished with the top and bottom ends far more prominent. The frequency range is also a little on the limited side with the highest tops and lowest bass missing somewhat. So depending on your music genre tastes, how much the sound will be affected by the range and scope is debatable.

Of course, it is worth keeping in mind that like many of the other aspects with the 1byone Bluetooth Turntable, the speakers are not designed to be the best in class or even the main feature and instead are there for if and when you need them. You can just as easily use this as a passive turntable and connect to your own sound system and enjoy a sound quality more in line with your own taste and preference. So while the sound is not the absolute best, it is very loud and is only a side feature. 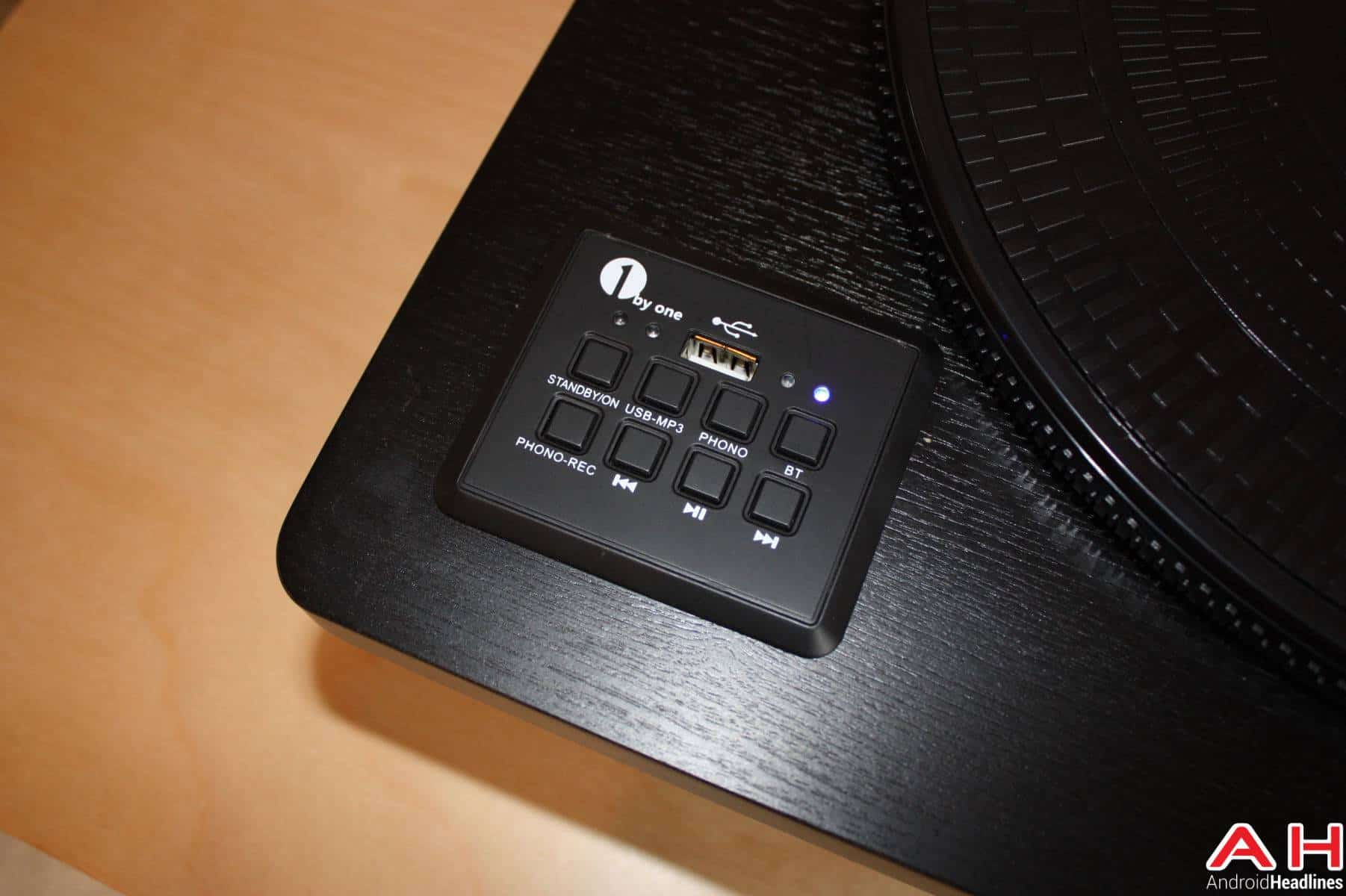 First up, this is a turntable which does offer Bluetooth capabilities. However, it does need to be made clear that this is ONLY a Bluetooth IN. So while some might assume you can connect the turntable to Bluetooth speakers, you cannot. The Bluetooth is there to receive the signal from a streaming device and make use of the turntable’s own internal speakers for playback. Speaking of which, the connectivity of the Bluetooth is excellent. As this is a device which does not use a battery and does require continual power, there was absolutely no issues with the consistently of the Bluetooth connection which remained solid during hours of playback.

Another of the big selling points with this turntable is that it is a device which offers multiple forms of connectivity. So as well as the standard vinyl playback and Bluetooth connectivity, you can also connect via USB (or Bluetooth) to play back your tracks. As mentioned, it also offers the option to digitize your vinyl by recording (while playing) to an MP3 format. If that was not enough, there is also a 3.5 mm stereo line in on the back, which will let you physically connect additional items as well. In fact, with the exception of connecting via Wi-Fi, this really is a turntable which you can connect just about any device to.

In spite of the Bluetooth being an in-only Bluetooth, that does not mean that you are resigned to using only the internal speakers. The back of the turntable does house two RCA out sockets which can be used to connect to a larger stereo system or speaker set. From the looks of it, it doesn’t seem as though the turntable comes with any specific amplifying capabilities, so it is assumed that you cannot connect directly to passive speakers and will need to go through some form of middle box (like an amplifier, stereo, or otherwise), or of course, connect directly to active (powered) speakers. That all said, for a device which comes priced at this point and boasting numerous ways in which you can connect and play music, it hard to criticize the overall performance capabilities of the 1byone Bluetooth Turntable. This is a nice performing unit overall. 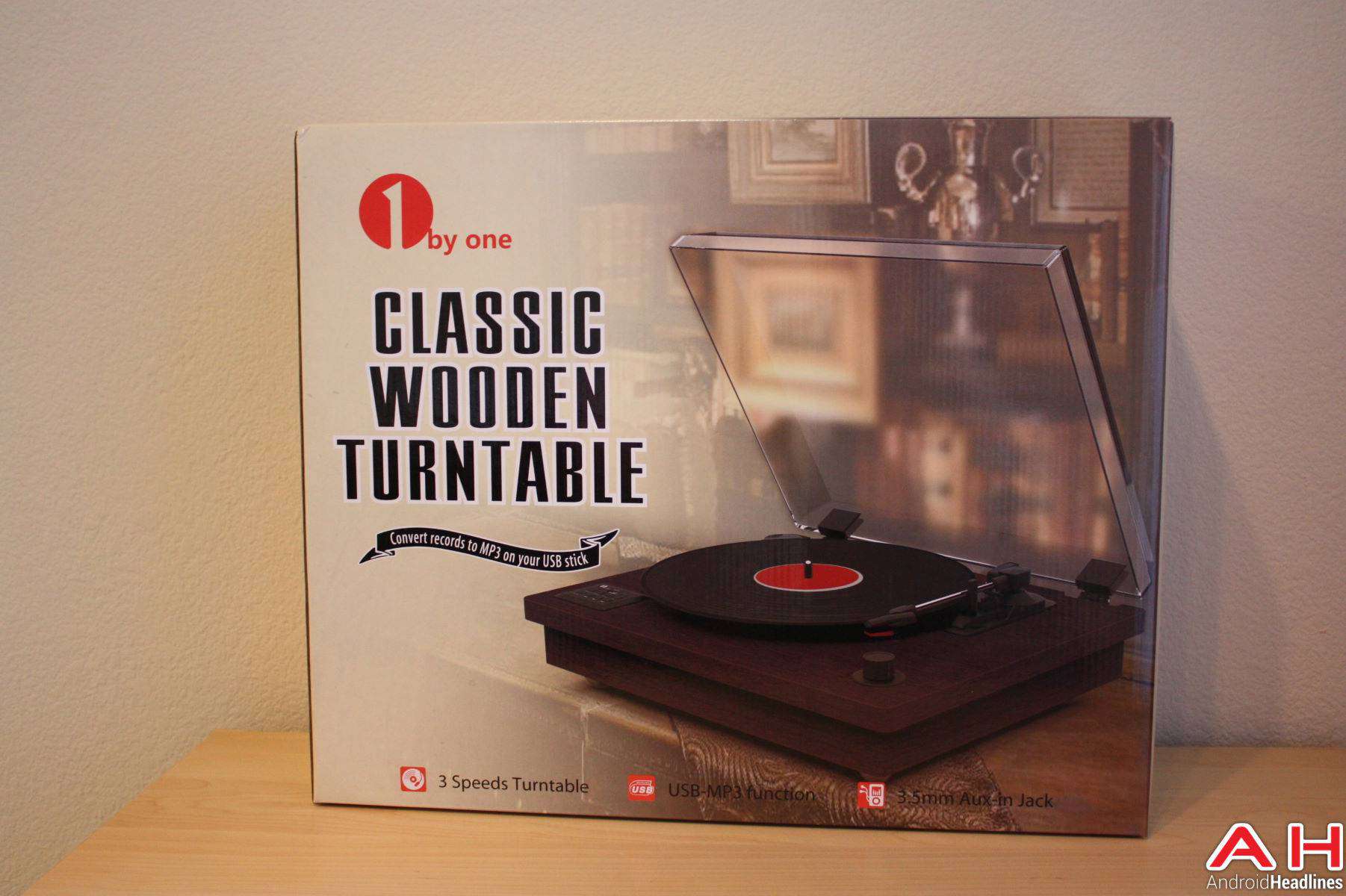 There are two main buyers of turntables. Those who know exactly what they want and those who are looking for a solution to play vinyl records in what is now a largely digital world. If you fall into the first category, those who know what they want, then chances are this is not the turntable for you. However, those buyers will already likely know this, as they will not be looking for such a combined level of usage and will be looking for standalone or a ‘separates’ type of turntable. For the other group, the ones who want to make use of the ability to play vinyl records in this modern age, this is overall a nice and good-performing turntable. You can find better turntables which just play vinyl and will require more equipment to be able to be used. But as far as an all-in-one solution, for this price point, you could do a whole lot worse. This is a turntable which offers the ability to play vinyl, to connect to your smartphone or tablet, play songs from your Spotify, Play Music or local storage, play set playlists from a USB stick, record your vinyl into MP3 format and all while also being able to manually connect and be integrated into larger stereo and audio systems. Not forgetting, all for under $150.

Should you buy the 1byone Bluetooth Turntable?

If you are in the market for an all in one solution, one which will not take up much space in the home and one which will let you play back from almost any source, then this is certainly a turntable you should look to consider. While there is better, at this price point and for the functions on offer, the 1byone Bluetooth Turntable is a solid purchase. For those interested in picking up one, the 1byone Bluetooth Turntable is currently available for $129.99.