Facebook has been aggressively pushing its way into the video market recently. While Facebook-hosted video has been available within the app and on the website for a while, Facebook has been focusing more and more on bringing unique video content to their platforms, and the near introduction of live video is just one example. Facebook also owns the Oculus Rift virtual reality headset which just started shipping to backers at the end of March, costing buyers $599 for the unit. Facebook has also started dabbling in 360-degree videos that are showing up in news feeds and which can be viewed both from the desktop version of the social network as well as within the mobile apps, allowing users to pan and spin the camera to see different angles of the video similar to the videos you see on YouTube.

With a heavy focus on video in general and more efforts being poured into VR and 360-degree video content, a logical move for Facebook would be to create and distribute a 360-degree camera, and that seems to be essentially what they've done. New details have surfaced today that Facebook has built a 360-degree camera that is designed for recording this type of content. Shown off at its F8 developer conference today, the unit looks not too unlike the one built by Google and GoPro, carrying a slightly different design with a conal-shaped top and bottom and sitting on top of a long pole with casters to wheel it around, presumably to make it easy to maneuver during recording.

The new unit is paired with Facebook's new video software designed specifically to be used with the camera rig which auto stitches the video recorded from all of the cameras together into one seamless 360-degree video. Instead of selling this unit like Google has done with their GoPro camera rig, Facebook will be open sourcing the plans to build the camera. This means that anyone who's interested in having this particular camera to shoot and create 360-degree video content can do so as long as they grab Facebook's schematics and build the camera themselves. The driving force behind all of this of course, is so more people will create 360-degree video content for Facebook and in turn, more Facebook users will watch video through the platform which is what Facebook really wants to accomplish. 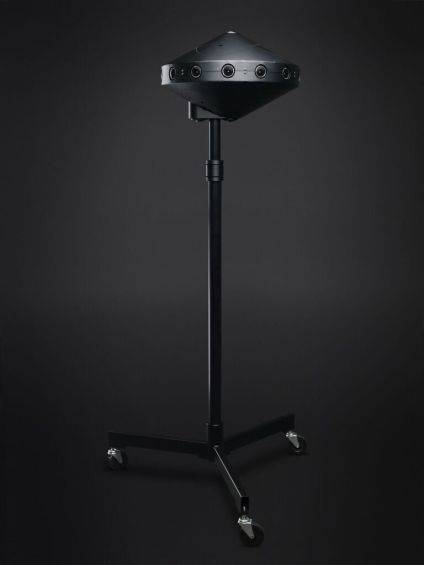