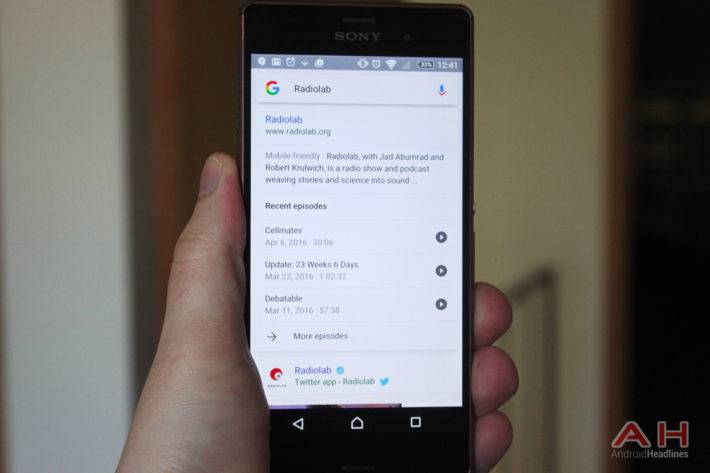 If you like listening to podcasts, there are plenty of apps on the Play Store that are designed just for that. This now includes Google's Play Music app which was just updated recently with the new icon. The downside is that podcasts aren't available for all users just yet as it seems to be a server-side feature that Google has to enable themselves, so even if you've updated to the most recent version of Play Music the option for Podcasts may not be there yet. The good news is that Google also allows users to listen to podcasts from within the Google app on their device, so if podcasts aren't available in Play Music just yet it's no big deal.

At the moment, this appears to be an Android-only affair with no mention of whether or not it'll be ported out to the Google app on iOS. Podcasts is a new feature within the Google app as of today, but having said that it's possible that some users may not be able to use the Google app for listening to podcasts if the app has yet to update for them. Unlike with the Play Music app though it doesn't seem to be server side, so the update should enable the feature and all users will have to do is search for a particular podcast once they open up the Google app on their device.

If the podcasts feature is available, the Google search results will include the podcast link along with the three most recent episodes of the podcast and a play button that you can tap to start playback. Once playback starts, you can pause and play the podcast at your leisure as a set of controls for playback management will display at the bottom of the screen for easy access, and the controls will show up from the lock screen as well so you don't have to wake the screen and unlock the phone just to pause the episode. With podcasts now available alongside other features like the new weather additions that were added to the Google app back at the end of January, the app is even more useful and it's now one more way to enjoy podcasts on your device.