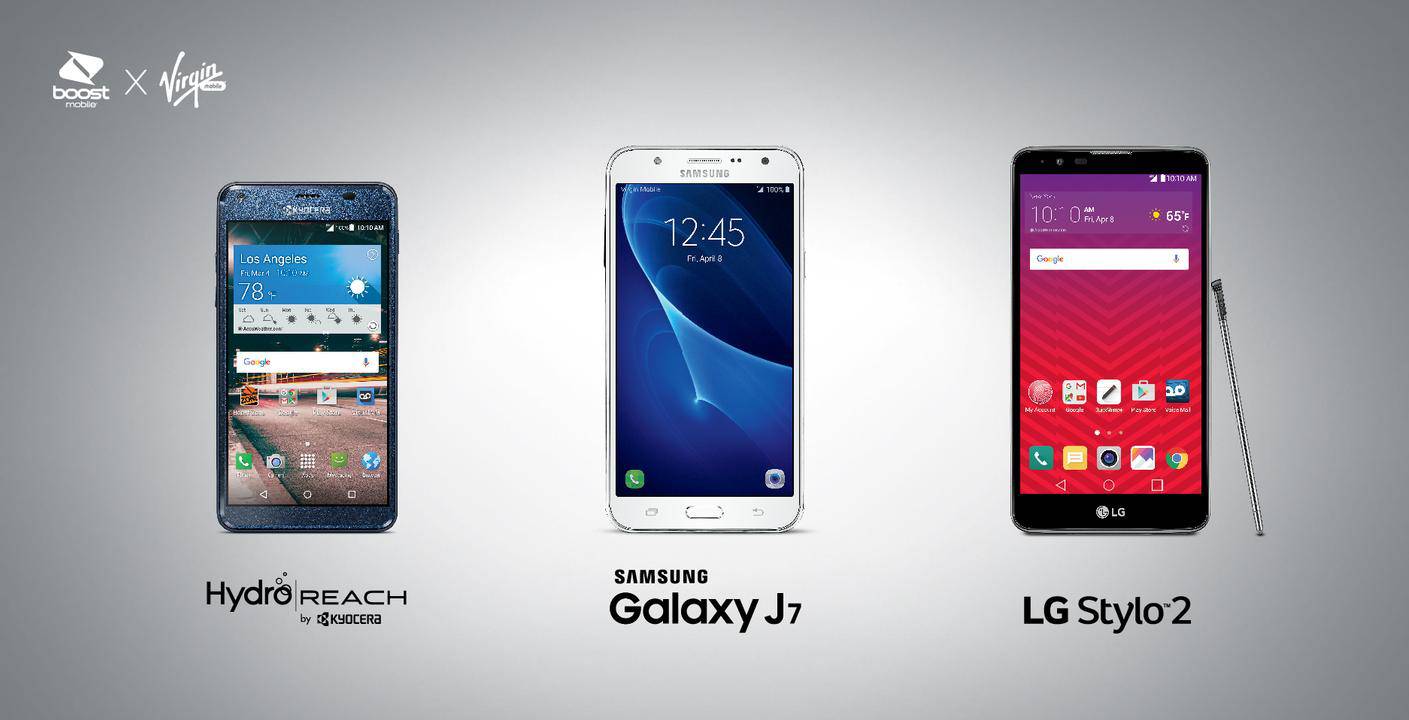 While Sprint is busy preparing for the launch of the all-new HTC 10 and finding ways to attack T-Mobile in their new ad spots, they're also focusing on their MVNO networks Boost Mobile and Virgin Mobile. Today Sprint has announced that each carrier is going to be launching three brand-new smartphones this week, although none of them are the HTC 10 just in case you're a customer of either carrier and were hoping for that to be the case. Starting from this Friday, April 15th, Boost Mobile and Virgin Mobile will both be carrying the Samsung Galaxy J7, the LG Stylo 2, and the Hydro Reach from Kyocera.

As both Boost Mobile and Virgin Mobile are prepaid carriers, customers will be paying outright full retail prices for each of these phones, but Sprint mentions that each device comes in at a price of under $230 so whatever device consumers pick they'll be saving quite a bit of money. Starting with the Hydro Reach from Kyocera, customers are looking at a 5-inch qHD display with 5MP camera on the back and a 2MP camera on the front, powered by a 1.1GHz Qualcomm Snapdragon processor with 1GB of RAM and a 2160mAh battery. It also comes with 8GB of onboard storage and is running Android 5.1 Lollipop, all wrapped up in a waterproof and dustproof design to keep it safe. The screen is even usable when it's wet, and it'll be available for $99.99 at both carriers this Friday.

For the LG Stylo 2, it'll cost customers $179.99 and will be available this Friday at Boost Mobile, and on May 9th at Virgin Mobile, and it comes equipped with a 5.7-inch HD IPS display with a 13MP camera on the back and a 5MP camera on the front. it's powered by 3000mAh battery and a 1.2GHz Qualcomm Snapdragon 410 quad-core processor with 2GB of RAM and 16GB of onboard storage, and it comes with the integrated stylus. The last device, the Samsung Galaxy J7, will be available to customers of Boost Mobile and Virgin Mobile starting this Friday for $229.99. The Galaxy J7 comes equipped with 5.5-inch HD super AMOLED display, and it's powered by a 3000mAh battery and a 1.4GHz octa-core processor with 2GB of RAM and it comes with 16GB of onboard storage. It also runs Android 6.0 Marshmallow out of the box and has 13MP camera on the back with a 5MP camera on the front.