Android N is technically already here but most OEMs are yet to roll out Android 6.0 (Marshmallow) to their smartphones and tablets around the world. Truth be told, with every passing week, more and more devices from a whole host of vendors are indeed receiving the much-awaited update to the latest full release version of Android, but the reality still remains that Marshmallow was released by Google to its OEM partners last year itself, and most manufacturers have left a lot to be desired in rolling out the new software to their respective smartphones and tablets. Blackberry happens to be one such company that has yet to roll out Marshmallow to the only Android device it has released – the BlackBerry Priv.

While its focus on security means that BlackBerry has rolled out fairly regular security updates to the Priv ever since the device went on sale late last year, it was only during an earnings call earlier today that the company’s CEO, Mr. John Chen, somewhat confirmed that Marshmallow for the device was actually in the works. While no exact ETA was given for the rollout, Mr. Chen reportedly said that it will take a few more weeks to roll out the new software, which means that the device will get Marshmallow by the end of April at the earliest or maybe even next month. Either way, Priv owners will probably take solace from that old adage – ‘better late than never’.

However, one thing that may come across as interesting for a privacy-focused, corporate-oriented company, is that one of its senior executives has now hinted that the beta version of Marshmallow for the BlackBerry Priv may be rolled out to willing volunteers before a wider OTA roll out of the final, stable version. According to a tweet today by Mr. Michael Clewley, the director of Handheld Software Product Management at BlackBerry, a more concrete announcement on this front may be made next week. While it’s not yet known whether BlackBerry has started rolling out Marshmallow beta to some Priv owners already, a video was uploaded to YouTube earlier this week, which purported to show Android 6.0.1 Marshmallow running on BlackBerry’s first-ever Android smartphone, although the veracity of that video has not yet been established independently. 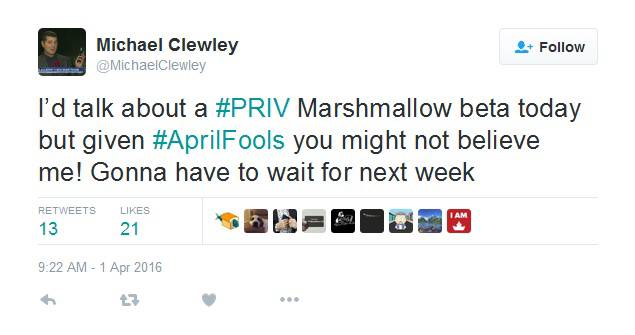