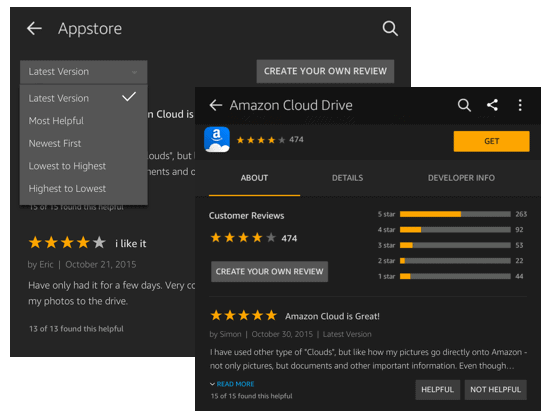 Reviews are one of those systems that are essential to the smooth running of selling anything. On the one hand they provide a great way for those interested in purchasing a product, service or app, a way to know what others think of your product, service or app. Which is sometimes one of the biggest motivators to buy or not buy. The other obvious benefit of reviews is that it is a method which can provide direct feedback to the seller, service provider or app developer on what the general public think of the product, service or app.

As a result it is not that surprising that the likes of Google has recently been looking at ways in which they can improve the review experience for both the end user and developers on the Google Play Store. Now it seems it is the turn of Amazon, who are also revamping the way reviews operate on their own app store, the Amazon Appstore. It used to be the case that the Appstore would highlight reviews which have seen the biggest number of supporting votes, which on the face of it works well. Although the features or flaws noted might not be relevant to everyone and that is where the biggest change is coming into effect.

According to the Amazon Developer posting, the new change will let users see reviews which are device-specific. So the idea being that users will get a better understanding of the app experience on their particular device. The updated system will also be taking into account the specific version of the app as well. Which should hopefully provide a better understanding for users of what they individually are likely to expect by downloading the app and not facing a situation where they are reading reviews that are relevant to an older version of the app. The blog posting also makes the point that they have improved the general algorithm which determine the star ratings for apps as well. Whether you are a developer or an end-user of the Amazon Appstore the new change is said to be going into effect today and therefore, should be live on your next visit to the Appstore.