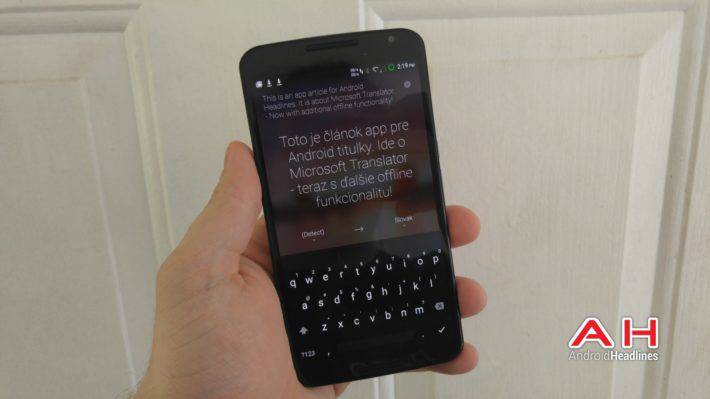 Artificial intelligence is, in a word, incredible. It's growing more and more incredible, more and more capable by the day. The definition of what artificial intelligence is also experiences steady growth, which speaks volumes about how the technology works and how it's used and enhanced. One particular area of A.I. that's received widespread attention from the tech community lately is neural networks. In short, neural networks use a network of nodes that each do their own processing to give a machine the ability to process information in the same way a human brain does, allowing for hugely enhanced function and a wider range of applications. The most exciting of these applications is a neural network's ability to learn not by having to be programmed or taught, but from experience.

Neural networks are already responsible for breakthroughs previously thought impossible. Pictured above is one such breakthrough; Microsoft's newest iteration of their Translator app can not only translate offline, it's now able to detect languages and translate faster than ever, making conversation and navigation of a culture you don't know the language of much more fluid. You guessed it, neural networks. Each translation the app makes adds to its ever-growing cache of knowledge about literal translations, grammar and linguistic conventions. Another breakthrough that neural networks gave us was the triumph of the AlphaGO A.I. over Go world champion Lee Sedol in four games of a five-game set. This unprecedented upset proved that A.I.s can actually learn and master the ancient game of Go and all of its infinite possibilities. To say that more breakthroughs aren't in the works, perhaps even happening as you read this, would be just plain wrong if not downright ignorant.

Neural networks, by definition, allow machines to learn, limited only by the number of nodes in a network and how capable those nodes are. Some readers may be familiar with Moore's law; in a nutshell, it states that computers will become smaller, more powerful and cheaper indefinitely through time. Since it has proven true so far, there's no reason to doubt that will continue to be the case. Those smaller and cheaper powerhouses won't just benefit consumers. They'll allow entities like Google and Microsoft, who are at the forefront of the neural network revolution, to build out larger, denser networks of more powerful hardware. Current hardware is capable of the things we've seen so far, but the power and build out capability will increase exponentially, given enough time. It should be noted, on that front, that the first artificial neuron popped up in 1943, although uses for it were decidedly limited back then.

University of Washington computer scientist Pedro Domingos has said that this neural network revolution rivals the internet in importance and ability to reshape human culture, and he may just be right. He has even written a book on the subject. While A.I.s that are polyglots and well-versed in the ancient game of Go may not seem like the stuff of revolutions, they are the prototypes, the building blocks, of what could become the next major wave of life-shaping tech. Neural networks have the power to create things like medical A.I.s, working A.I.s, creative and even emotional A.I.s. Speaking with a modern chat bot and giving it a Turing Test, in which a human tries to figure out if they're speaking to a human or bot, will reveal how startlingly close we are to having A.I.s that can perfectly simulate emotion. This may not seem terribly useful, but it is absolutely rife with potential. Between advanced mechanical robotics and neural A.I., just about any job that a human could do, in the very near future. This could seriously spark a revolution of insane proportions. Suddenly, the only humans needed in the work force will be programmers, and even then, only until the A.I.s learn everything they need to know about programming and maintenance. This, in essence, frees human society of the need to work and produce, meaning everybody has free time, all the time. Mind you, this scenario is far from inevitable and, if it does happen, could take a great many years to play out. The implications should be self-explanatory, with a bit of thought, since going into them here would lead to the article veering heavily off topic and becoming extremely long.

Now, to address those of you who may have thoughts that are a bit more out of left field, let's start with the subject of rogue A.I.s. As popular as they may be in science fiction, an A.I. whose nodes are properly maintained and watched for signs of corruption, along with being hard-coded against "rogue" functions like harming humans or making major decisions unaided should, in theory, never pose any threat. The way current neural networks are, if that is the design to be refined and iterated into the future, guarantees as much, perhaps even promising self-sufficient software maintenance. Let's not forget that we're also still a very long way off from bots in high places, if that will ever be a thing at all. Another rather far-fetched subject that may warrant a mention here would be the so-called "ghost in the machine", or an A.I. taking on a very human personality, to the point that it actually gains humanity. This is another popular sci-fi topic and could be considered dangerous for all the same reasons as rogue A.I.s, which we just talked about. Without that element, an A.I. with realistic humanity will likely never happen; scientists have yet to decipher the whole of the human brain, the terribly and wonderfully complex machine that it is, and the probability of mimicking one function leading to the growth of all the others is quite low. That said, with all the reasons in the world to take off the tinfoil hats and embrace the growth of A.I. as an advancement of humanity, it's no surprise to see tech bigwigs gunning so hard to turn science fiction into reality.