ZTE is a company that has been making some really big strides in the smartphone world of late. In fact, ones which have seen the company producing some decent quarterly and yearly figures and ones which have led to the company expecting bigger strides going forward. However, more recently ZTE has seemed to be enduring legal issues due to claims that they have fallen foul of U.S. exporting regulations. Either way, in terms of their smartphones, it looks as though a new smartphone could be gearing up to be announced, as one has now been spotted getting benchmarked on GFXBench. One which comes with the ZTE A2017 model number and seems to be sporting some decent specs.

According to the benchmark listing and in terms of the specs, the ZTE A2017 will come sporting a 5.5-inch display which makes use of a 2560 x 1440 resolution. Inside, the ZTE A2017 will come loaded with 4GB RAM and come powered by the Qualcomm Snapdragon 820 processor, along with an Adreno 530 powering the graphics. In terms of cameras, the ZTE A2017 looks to be equipped with a 21-megapixel rear camera (defined as 19-megapixels) which is capable of 4K recording and which will be coupled with an 8-megapixel (defined as 7-megapixel) front-facing camera. Storage looks to be set at 64GB for internal storage (defined as 51GB), although there is no mentioning of whether there will be a microSD card slot for expanding the storage. Last but not least, the ZTE A2017 is listed to come running on Android 6.0.1 (Marshmallow) out of the box.

So by any standards, the specs listed do seem to be fairly decent and certainly in line with current flagship devices. Which raises the question of whether this will be a follow up to last year’s ZTE Axon smartphone. The specs would definitely suggest that this is going to be marketed as high-powered, high-performing and major device. However, as benchmark listings never provide any firm details on the likely price of a smartphone, the status and positioning of the ZTE A2017 is unlikely to be confirmed until more details come through. As is the case for when it will likely become available. 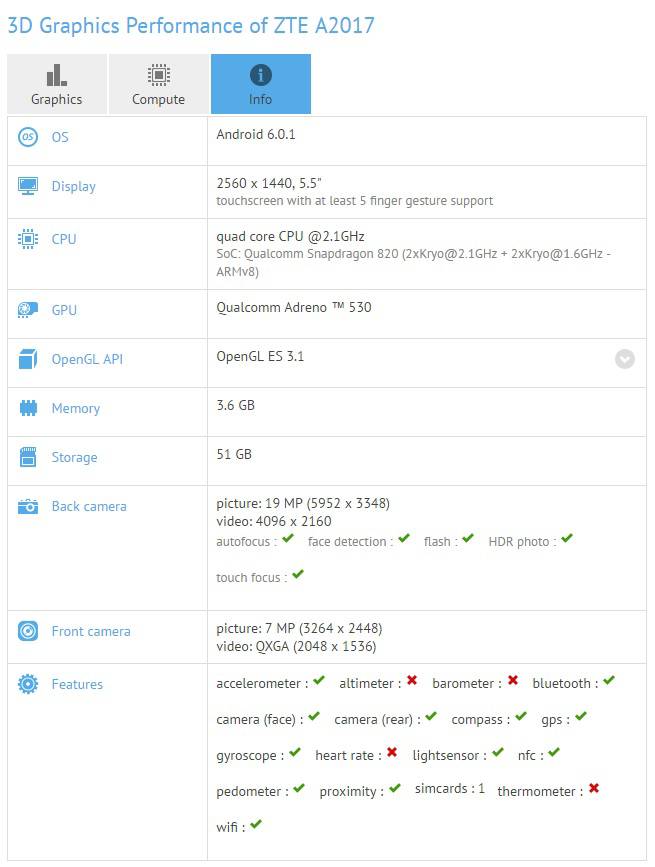