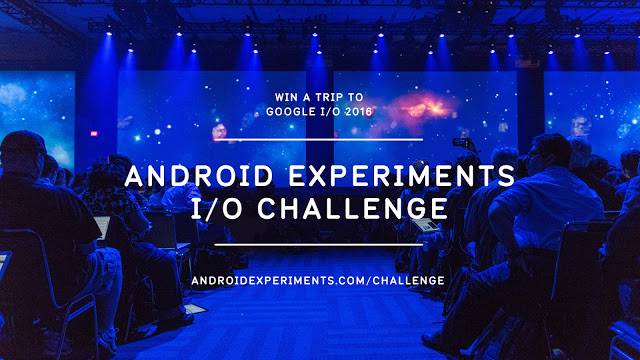 Google has been doing Chrome Experiments for quite some time, and we've seen some pretty cool ones at Google I/O in recent years, including a way to race around a track in a browser tab in Chrome. Last year at Google I/O, the company announced Android Experiments, which developers can create some pretty interesting experiments on Android. Today, the company is announcing that you can submit your own Android Experiment between now and April 13th (roughly 3 weeks from now) and you might win a trip to Google I/O which takes place May 18th through the 20th. There will be three top-winners that get a trip to Google I/O, and five runner-ups who will get the Nexus 6P. This means there is going to be a lot of competition for these 8 prizes, so you best create a pretty impressive experiment to submit to Google.

In their blog post today, Google lists what makes a good Android Experiment, and that includes Creative uses of Android's new or distinctive features, Projects that explore how we interact with our devices, in small and big ways, Unique visual aesthetics, Open Source projects that surprise other developers, and lastly "Surprise us". So Google always wants to be surprised with what developers can come up with and often times they are pretty surprised. You'll be able to enter your Android Experiment into the Google I/O challenge today by heading to their dedicated website and sending it in. No word on when the winners will be contacted, but it will definitely be before Google I/O in May.

Each year, Google holds their annual developer conference, for about three days in the summer. Typically it's been held at Moscone West in San Francisco. However, this year it's being held in Mountain View at the Shoreline Amphitheater, which is leading everyone to believe that Google has some big things in store for this year's show. The conference takes place from May 18th through the 20th. And the keynote will take place first thing on the 18th. It'll likely be a lengthy keynote as it usually is – around 3 hours or so. We'll be there so make sure you keep it locked to Android Headlines for all of the details.