Skip to content
Advertisement
Trusted By Millions
Independent, Expert Android News You Can Trust, Since 2010
Publishing More Android Than Anyone Else
13
Today
163
This Week
606
This Month
5725
This Year
115728
All Time
Advertisement Unless you’ve been living off-grid for the past few weeks, you’ll no doubt be familiar with the controversy surrounding encryption right now. The San Bernardino shooter’s iPhone might have been the spark that lit the fire, but encryption has been a hot topic for a long time now. Loved by users and security experts and hated by the FBI, the NSA and parts of the US Government, encryption has certainly caused quite the stir as of late. WhatsApp, one of the most-popular online messaging platforms in the world has been using encryption for some time now, but in its latest app update, it appears to be highlighting that feature to users, further educating them about encryption.

The new update is WhatsApp version 2.12.498, but there’s a 2.12.500 build floating around as well, but it appears this is the build that could be hitting people’s devices via the Play Store any moment. When using the app, it now lets you know whether or not a conversation is encrypted, and the answer is likely that it is these days. WhatsApp first started using end-to-end encryption some time in 2014, and it now appears to be standard across all platforms. A note will appear in the conversation that clearly says “Messages you send in this chat are now end-to-end encrypted” and there’s also a pop-up dialog box that says something similar for group chats.

Other changes in this particular update include a “Read more…” tweak to long messages, reducing the impact of a massive long message in a group conversation, and speaking of messages, there now appears to a way to star messages and then look them up in further menus. These are nice new tweaks to see, and it appears like the WhatsApp developer team for Android has definitely woken up, as there are a number of different builds that are appearing out there right now. Whether or not these all make their way to users is unclear, but 2.12.498 appears to be one that will hit users via the Play Store in the coming weeks. Whether or not this new move is down to the recent controversy surrounding Apple’s latest clash with the FBI is unclear, but the timing is curious to say the least. 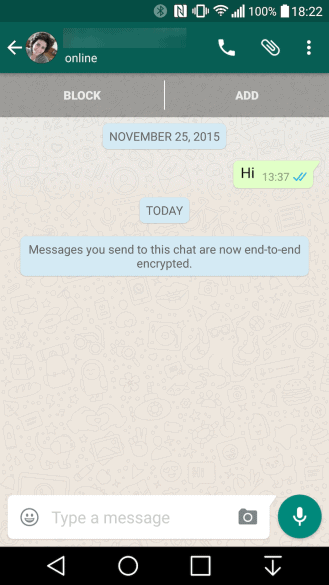