As they do every year, Samsung has introduced their new flagship offerings this year as well. The Galaxy S7 and S7 Edge were announced as the successor to the Galaxy S6 and S6 Edge. These two devices are already available for purchase in a number of regions all over the world, and Samsung received quite a few pre-orders for the two phones. These devices are definitely improved variants of Samsung's flagship offerings last year, as they do bring water resistance, design improvements, spec bump, and a number more improvements overall.

That being said, we've already shared quite a few water resistance tests in the past couple of weeks, and the two devices were also torn apart by iFixit recently. Well, the time has come for SquareTrade's test, the company has decided to test Samsung's all-new flagships and compare the results with the iPhone 6S and iPhone 6S Plus tests. Now, the company has tested the aforementioned devices to water resistance, and has performed various other durability tests, read on.

SquareTrade has first tested the device using their 'DunkBot' machine, in other words they've submerged all of the devices in 5 feet of water for 30 minutes. The Galaxy S7 and S7 Edge survived this test, though SquareTrade says that the audio was permanently muffled and distorted. The iPhone 6S and 6S Plus did not fair as well, the water got under the display and the phones basically died after a short period of time (before the 30-minute mark), which was to be expected considering they're not water resistant nor water proof.

The 'TumbleBot' test did not really fare well for either device, though the iPhone 6S proved to be the best in this scenario. Galaxy S7 and S7 Edge's back and corners were shattered after 30 seconds, the iPhone 6S Plus' display cracked, while the iPhone 6S survived with some corner nicks, nothing too severe. After dropping the phones from 4 feet to their corners, the Galaxy S7 cracked after 4 falls, while the S7 Edge was completely unusable after 7 falls. When dropped on their display, neither phone did as well, they cracked after 1-2 falls. In the bend test, the Galaxy S7 Edge did the same as the Galaxy S6 Edge, while the Galaxy S6 proved to be more durable in this test (same as the iPhone 6S), which was to be expected. If you'd like to take a look at SquareTrade's official video of these tests, check out the video which is embedded down below, where you'll be able to see the breakability score of these devices as well. 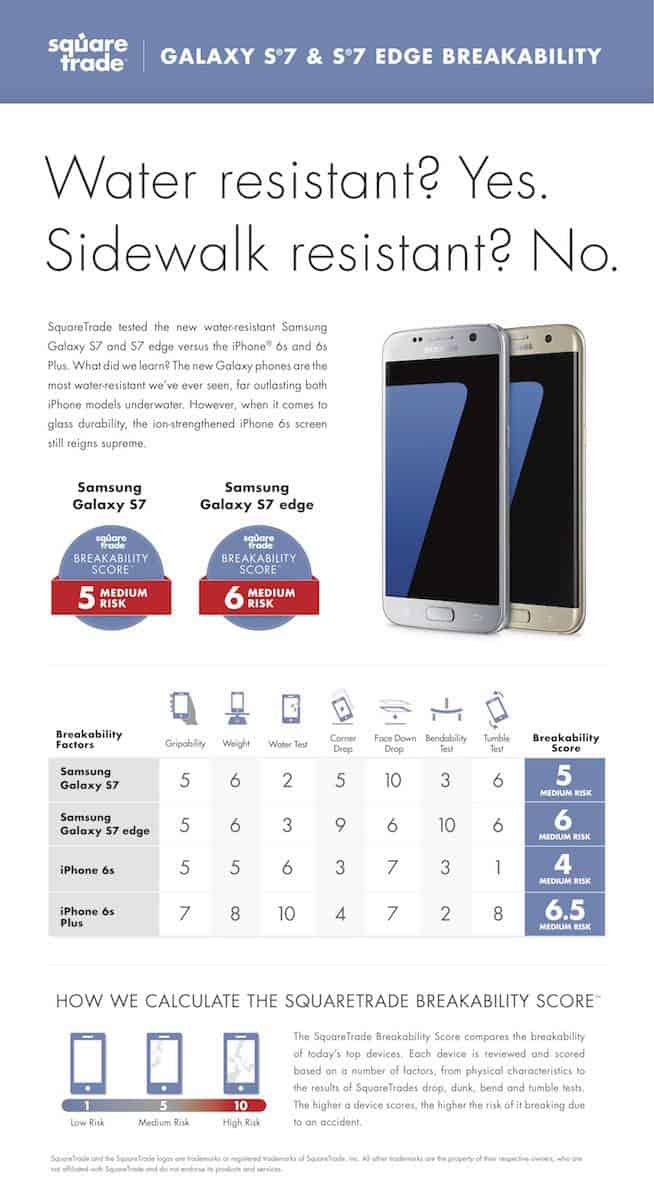