Skip to content
Advertisement
Trusted By Millions
Independent, Expert Android News You Can Trust, Since 2010
Publishing More Android Than Anyone Else
25
Today
71
This Week
516
This Month
516
This Year
118406
All Time
Advertisement Sony is a well-known name that has been pumping out electronics for decades.  Their massive distribution of high-end stereo equipment and televisions is legendary, but when it comes to smartphones, their name gets lost in a pool of quicksand that will simply not let go.  Their smartphones are well-built, premium looking, have long battery life and offer great cameras, although when it comes to specifications, Sony is reluctant to use QHD displays and by the time the device gets to the US (if they ever make it at all) the technology is already a year old.  To make matters worse, none of the carriers in the US want to handle Sony and this is most likely because of their ‘production schedule.’  The Sony Xperia Z series was the flagship model for Sony, but at this year’s MWC Sony seemed to focus on the Xperia X series – so much so they have put out a Infographic entitled – “3 ways Xperia X Series is smarter than your average smartphone.” Sony focuses on three categories – the camera, battery and design and says,”Our aim is to make every day smarter and simpler.”

Sony devices have always been known for taking a great picture, and Sony themselves have been known for making the best sensors for other smartphones and the Xperia X is no exception.  Their next generation camera recognizes the depth, the time and the area of the subject you are about to shoot. Its all-new Predictive Hybrid Autofocus takes “spontaneous capture to another level” and allows you to take a sharp photo at a moment’s notice.  Once you choose your subject, the camera will predict its motion and allow you to snap a picture in perfect focus and free from blur.

The second feature Sony is touting is the Xperia X’s design of all three models – by using premium materials, texture and the proper curvature for the best feel in the palm of your hand.  Many think that it is merely a rectangle like most smartphones, but Sony says much analysis and testing is done to make sure the design of their Xperia X results a “perfect hand fit.”  The Xperia X also sports an edge-to-edge display to allow the smallest design possible. One feature that Sony really stresses is long battery life and they have pioneered Smart Battery Management and along with Qnovo’s Adaptive Charging technology to deliver up to two days of battery life into the Xperia X series devices.  This will also add up to twice as long to your battery’s lifespan – the less you have to charge your battery, the longer it will last.  Sony brags about their battery life, but please also remember that even in the top two models, you are talking about a 5-inch Full HD display and in the cheapest model, only an HD display.  Most high-end devices today have a Quad HD display and a larger display – two qualities that result in more battery usage – remember, there is always a trade-off. 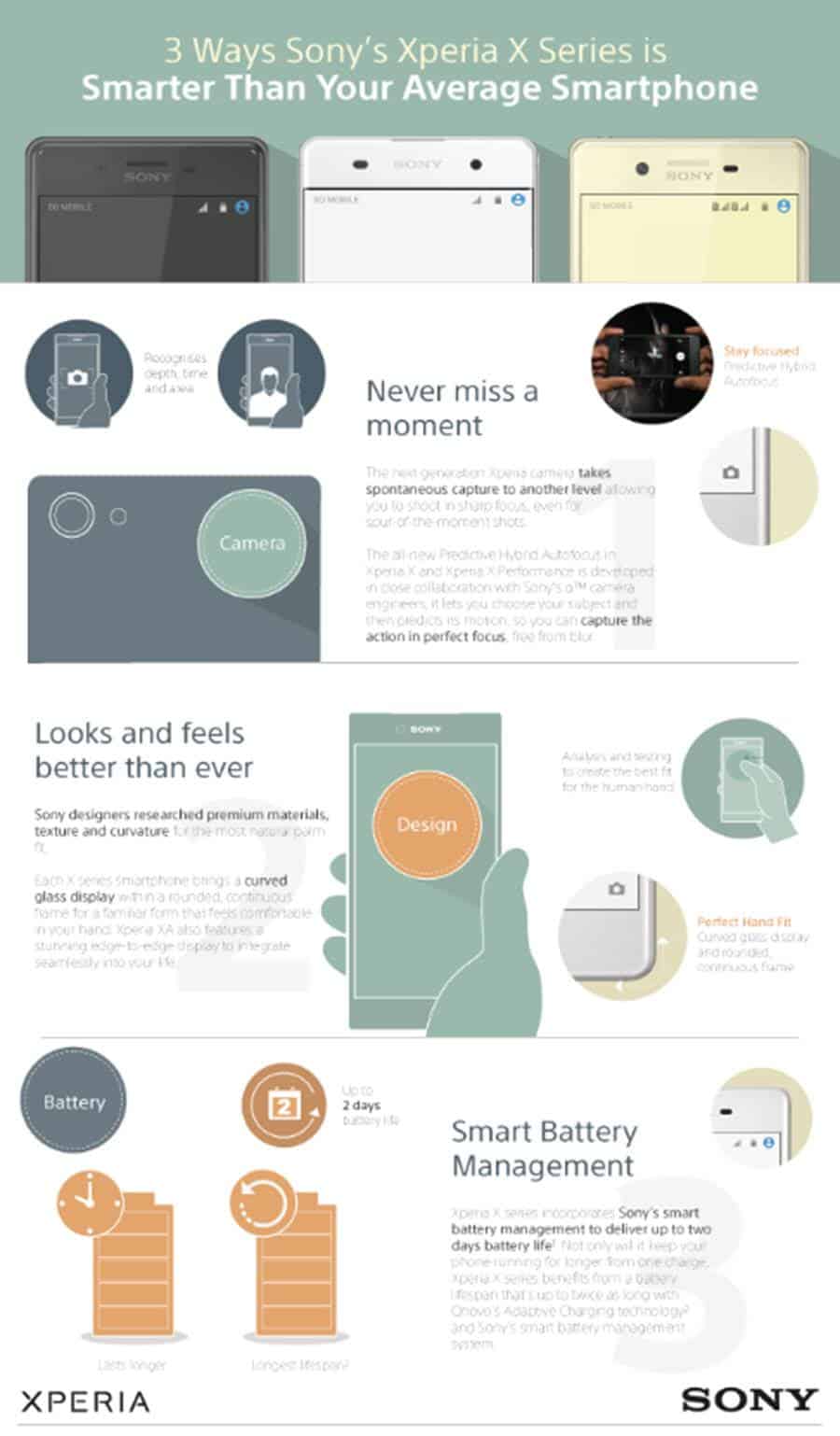