LeEco (formerly Letv) is quite an interesting company. This China-based company has been around for a long time, but they’ve started manufacturing smartphones in April last year. They currently have 5 smartphones as part of their portfolio, and it seems like additional ones are going to be announced next month. LeEco has been teasing the arrival of their new flagship for quite some time now, and by the looks of it, Le 2, Le 2 Pro and maybe even Le Max 2 could launch next month.

We’ve seen tons of leaks regarding the Le 2 smartphone, and the company has confirmed that the device will be fueled by MediaTek’s Helio X20 processor. They’ve also teased Qualcomm’s Sense ID Ultrasonic Fingerprint scanner for one of their upcoming devices, and by the looks of it, that handset will also going to be announced next month, though we’re not sure LeEco was thinking of Le 2 when they were sharing that teaser. With that in mind, LeEco Le Max 2 listing has surfaced on AnTuTu recently, even though it still carries the ‘Letv’ branding. Anyhow, the Le Max Pro is currently the only smartphone to offer the Ultrasonic Fingerprint Scanner, and that handset has been sold in only 1,000 copies, and we have no idea when will it going to be available for a wider audience. It is even possible that the company plans to scrap the Le Max Pro in favor of the Le Max 2, but we’re getting ahead of ourselves.

The Le Max 2 listing on AnTuTu reveals the device’s partial specs. According to AnTuTu, this handset will sport a QHD display, though it is not clear what size will its display going to be. The Le Max 2 might sport a 6″+ display, just like its predecessor, though LeEco might opt for a different size in the end. The device will also pack in 4GB of RAM and 32GB of internal storage, while it will be fueled by the Snapdragon 820 SoC. The 21-megapixel snapper will be placed on the back of this phone, and an 8-megapixel shooter will be available up front. Android 6.0.1 Marshmallow will come pre-installed on this phablet, and LeEco’s UI will be included on top of Google’s OS.

That is pretty much it, at least for now. The specs of this device seem basically identical to the ones on the LeEco Max Pro, at least the ones revealed by AnTuTu. Anyhow, stay tuned for further info, it is almost certain at this point that LeEco plans to hold an event next month, and it will be interesting to see what they have to offer. 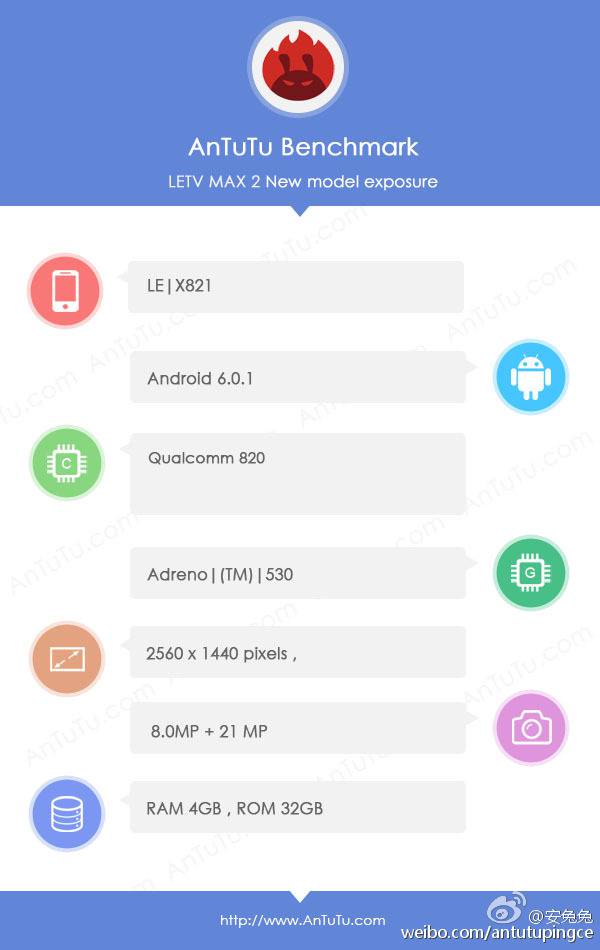