Skip to content
Advertisement
Trusted By Millions
Independent, Expert Android News You Can Trust, Since 2010
Publishing More Android Than Anyone Else
31
Today
118
This Week
610
This Month
4611
This Year
114638
All Time
Advertisement At South by Southwest this week, Samsung has just unveiled a new app which users can interact with to create music in a totally new way. To be clear, it isn’t necessarily new but it is new to smartphones. The app, called Hum On!, lets users create music, or something like it, simply by humming. Although Hum On! is currently in its beta phase and has yet to launch as a final product, humming the tune of a song or humming to create music is something that people have been doing for generations, so it almost makes sense that Samsung would take this idea and experiment with it in app form.

For an app centered around humming to make music, it’s fairly comprehensive with a handful of features that one wouldn’t necessarily expect to find. To begin, users simply have to open the app, hit the start button and let the app record the hummed melody. After the recording function is over, Hum On! will take the recording and process it into a transcribed set of musical notes and the app plays it back for the user. Hum On! even has the ability to play the notes back with a selection of three different genre types as a musical accompaniment, including Classical, R&B, and Rock.

Samsung explains that analysis software and machine learning are the main driving forces behind making the app work, as the analysis software listens for specific things like pitch and voice duration to analyze things in real-time, while the machine learning takes the end result of the hum recording and applies that to the music notes for a song creation. Once a song is created, Samsung states that the songs can be shared via social media, but they also mention that each creation is capable of being used as background music for videos,so for those who may like to upload stuff to YouTube but are worried about copyright, Samsung is positioning Hum On! as a way to get rid of those worries. Samsung doesn’t give any sort of timeframe for a final release out of beta, and that at the moment they’re currently trying to improve the quality of the recognition accuracy. 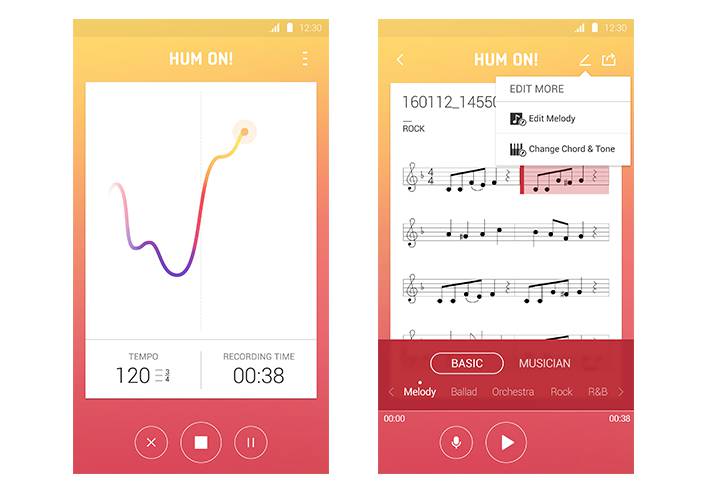