For a company that does not show much innovation in its final products, if this new patent comes to fruition, it could really be the 'Next Big Thing."  Samsung had a hit with the Galaxy Note series – one which nobody yet has equaled – and then dual curved display edge design, while cool and sexy, has not proved to be practical.  Samsung is searching for that next 'form factor' that nobody else has, and the foldable display may just be their ticket to increased sales.  Many people want a big screen when viewing their display, but they want a smaller form factor when carrying it around.

Samsung routinely floods the United States Patent and Trademarks Office (USPTO) with many different designs for flexible displays but never make it on an actual device. Samsung's answer to the LG G Flex line was the Galaxy Round with a curved display that was sold only briefly in South Korea.  Samsung has experimented with bendable or foldable phones, a display that could roll up and even dual-displays – however, this latest patent uses their rollable display concept, but in a more traditional looking smartphone.  The display is normally smaller, but the user can extend the display when the content is such that a larger area is called upon by pulling out the existing display…see the illustration below.  When 'tucked' away, the device size is acceptable for carrying in your pocket, but by grasping the edge (marked 221) and pulling, the display (marked 223) would unroll out of the area marked 211, to a larger display that would be used while interacting with the device.  When you are done, simply push and the display will retract back into the device, put it in your pocket and away you go – now that is innovative.

The problem with most patents is we never get to see the final design out on the market for sale, but this is one that makes a lot of sense.  Samsung, and other display manufacturers, already have working displays that can roll up, so it is not a large leap to see that type of display inside this 'case,' so to speak.  This way the consumer gets the best of both worlds – that smaller form factor that is easy to carry around and the large display we all quietly crave. 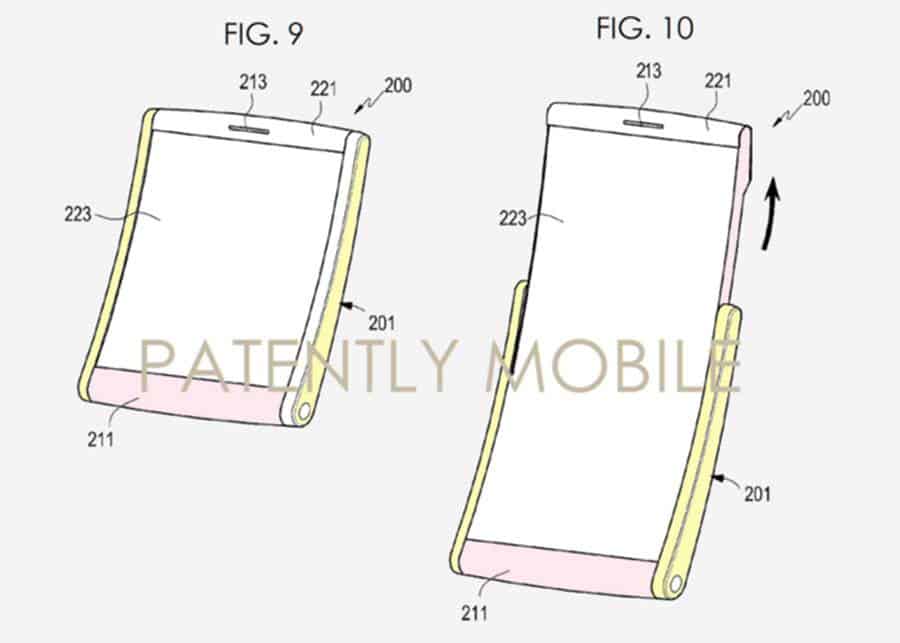 Advertisement
Trusted By Millions
Independent, Expert Android News You Can Trust, Since 2010
Publishing More Android Than Anyone Else
20
Today
212
This Week
369
This Month.
369
This Year
110555
All Time
Advertisement