At this point in time, the Samsung Gear S2 is among the most popular smartwatches on the market, which is quite a feat considering the fact that the wearable in question runs on Tizen OS as opposed to the more popular Android Wear operating system developed by Google. Nevertheless, Samsung’s proprietary Tizen OS for the Gear S2 continues to improve at a steady rate, and after receiving a hefty software update earlier this month, Samsung’s smartwatch is now queued up for yet another update, which is reportedly already available in several regions.

The new software update for the Samsung Gear S2 weighs 20.39 MB and, as usual, it’s available for download on the smartwatch through the Samsung Gear application, which may have to be updated separately in order to accommodate the new OS version. Oddly enough, however, the latest software update for the Samsung Gear S2 doesn’t have a changelog, or more precisely, the changelog remains unchanged from the previous major software release, which was sized at roughly 82 MB. With that being said, as yet there’s no easy way to tell what the new update is all about, but it might be a complementary update for the previous release, fixing potential stability issues and bugs that may have slipped by Samsung before launch. Otherwise, the new software package could also be a precursor for a larger, future update that might add more functionality to the watch.

Whatever the case may be, Samsung Gear S2 owners willing to take the new update out on a test drive can either wait for the update notification to arrive or can try triggering the software upgrade process through the Samsung Gear application’s settings menu. Either way, Gear S2 wearers should be aware that their smartwatch will not be usable during the updating process. Furthermore, the watch’s settings might be restored to default values once the update is applied, so you may want to take note of your current setup before proceeding with the download. And for readers who might not be up to date with other recent happenings in the Samsung Gear S2 camp, it should be noted that the smartwatch might receive compatibility with iOS devices soon, and Samsung could also release the long-awaited Band Adapter accessory, recently spotted in a series of leaked images. 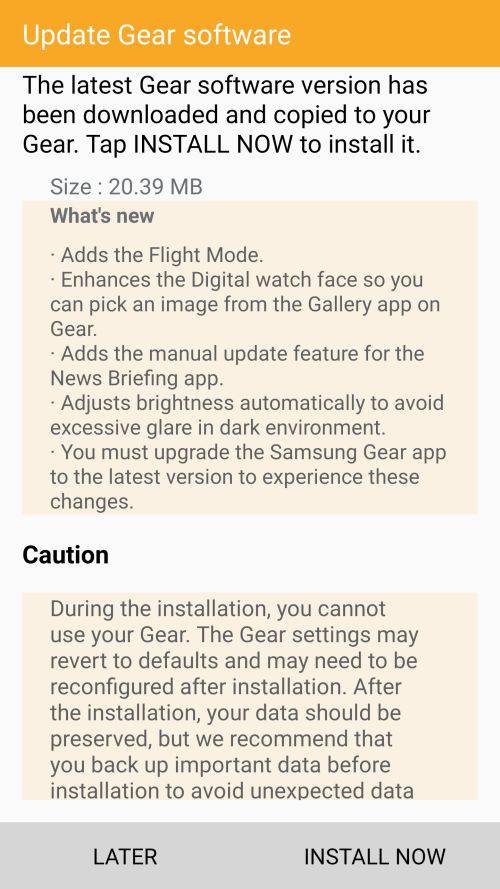