Android devices have had the ability to generate a Wi-Fi hotspot for many years now. The feature may not be supported by your carrier or your Internet plan, or perhaps the manufacturer (or carrier) has modified the device such that it doesn’t support Wi-Fi tethering, but the underlying technology has supported it for some time now. Google improved Android’s tethering a few years ago by adding Bluetooth tethering, which can reduce power consumption at the expense of a slower connection to the Internet (this may or may not be relevant depending on the radio technology being used to connect online). However, apart from the inclusion of Bluetooth tethering, the function has not been changed for some time now. With the release of the Samsung Galaxy S7, Samsung have improved on stock Android’s tethering by allowing the device to share the Wi-Fi network.

This means that the Galaxy S7 may be used as a portable range extender, or to share a Wi-Fi network across multiple devices should you have forgotten or not have the necessary Wi-Fi pre-shared key (PSK). It isn’t clear if the technology may be used to share certain premium-type Wi-Fi networks, such as those sold to customers by hotels, although Samsung’s disclaimer implies that the Galaxy S7’s Wi-Fi sharing ability may allow devices to share a network designed for one device across many.

In use, the feature allows the Galaxy S7 to share either the LTE (or 3G) connection and the Wi-Fi connection with other devices. The device will prioritise sharing a Wi-Fi network and the software does not prevent the device from switching the network it is connected to: should your device go out of range of a particular Wi-Fi network, it will either reconnect to an alternative or will share the LTE connection. It is unclear if the new feature is harder on the battery compared with the stock way of tethering, which is to disable the Wi-Fi network as the device is only able to broadcast the hotspot rather than receive as well as broadcast. The option may be disabled in the Settings, Mobile hotspot and tethering, More tab if desired. Currently, the new feature is only available on the Samsung Galaxy S7 and Galaxy S7 Edge. It is unclear if the feature will be rolled out to the Galaxy S6 and Galaxy Note 5, although it is likely that the feature will be borrowed by the modifying community and could be unofficially supported on other devices, subject to the hardware requirements. 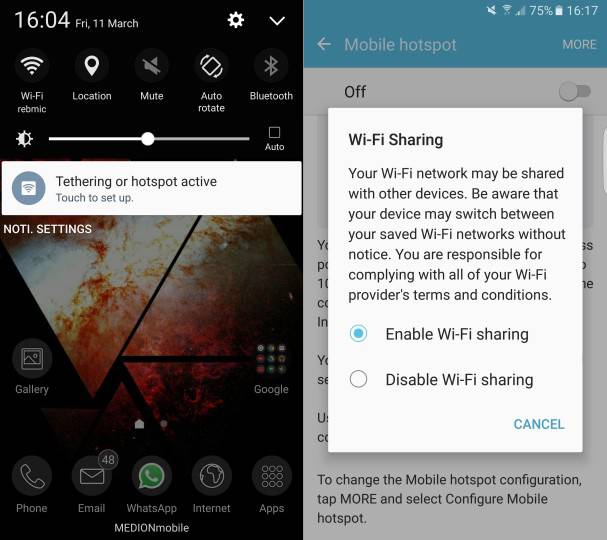