HTC has already begun teasing their all-new flagship. The company is using the ‘PowerOf10’ slogan for this handset, and the vast majority of people expected this handset to be called HTC One M10. Well, @evleaks tweeted out ‘HTC 10‘ naming earlier today, and suggested that the device might lose the ‘One M’ part, and simply be called ‘HTC 10’. We’ve seen quite a few rumors regarding this handset in the last couple of weeks, and now we’re here to take a look at some fresh info, read on.

A rather well-known ROM developer for HTC devices tweeted out the specs of HTC’s upcoming flagship, well, partial specs that is. According to @xXminiWHOOPERxX, the HTC 10 (or whatever HTC ends up calling it) will sports a QHD (2560 x 1440) display, along with 4GB of RAM and a 3,500mAh battery. The device will be fueled by the Snapdragon 820 64-bit quad-core processor, along with an Adreno 530 GPU for graphics. According to the source, the device will also pack in an IR blaster, and a fingerprint scanner, though we still don’t know where will it be located. If HTC ends up using the physical home button here (and they probably will), then it will be placed inside of that button. The source also mentioned that the HTC 10 will be water and dust resistant (IP68 certification), and the phone will be available in 32GB, 64GB and 128GB variants.

Now, these specs actually look quite believable, and go hand-in-hand with what we’ve seen thus far. We still don’t know what size will be the display of this smartphone, but chances are it will be between 5.2 and 5.5-inches big. You can expect this phone to be made out of metal, and a 12-megapixel snapper has been mentioned as well, even a camera sample leaked recently. Android 6.0 Marshmallow will almost certainly going to ship out of the box here, and on top of it, you’ll be able to find HTC’s proprietary Sense UI. It is also worth mentioning that @evleaks tweeted out the possible release date for this handset a while back, and according to that info, HTC will unveil their new flagship on May 9th, but take that info with a grain of salt. 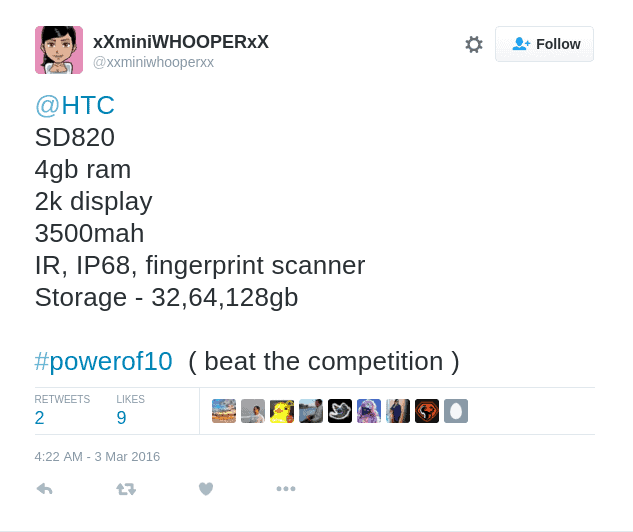