QiKU is one of many China-based companies that we’ve talked about in the last year or so. This company is actually backed by Qihoo 360, which is quite interesting. Anyhow, QiKU has introduced their first three smartphones last year, and QiKU Q Terra is the most powerful one out of the bunch. The Q Terra is QiKU’s 6-inch flagship phablet which is fueled by the Snapdragon 808 64-bit hexa-core SoC processor, and made out of metal. We’ve talked about the Q Terra quite a few times thus far, and we did wonder when will QiKU announce its successor. Well, a rather interesting QiKU-branded smartphone popped up on AnTuTu, read on.

We did not hear anything about QiKU for quite some time now, and then all of the sudden one of their devices surfaced on AnTuTu. If you take a look at the listing down below, you’ll get to see the mysterious handset codenamed QK1509-A02. This smartphone doesn’t really have a name at the moment, but judging by its specs, this will be a direct successor to the QiKU Q Terra, and might as well be called the Q Terra 2, but we’ll see. Speaking of specs, this smartphone will ship with a fullHD display, 4GB of RAM and 128GB of internal storage. Qualcomm’s Snapdragon 820 64-bit quad-core processor will fuel this handset, along with an Adreno 530 GPU, and Andriod 6.0.1 Marshmallow will come pre-installed on the device, along with QiKU’s custom UI which will be included on top of Google’s OS. The Q Terra featured dual camera setup on the back, and it seems like its successor will use the very same setup as well. Two 13-megapixel snappers will be placed on the back of this handset, though we do believe QiKU intends on using new sensors here, despite the fact they’ve opted for 13-megapixel ones again.

That is pretty much everything AnTuTu revealed thus far, but something tells me we’ll hear more about this handset soon. QiKU has introduced their first three smartphones back in August last year, and it remains to be seen if they’ll stick to the release cycle, or perhaps intend on releasing their new flagship earlier this year. Either way, stay tuned, we’ll report back soon. 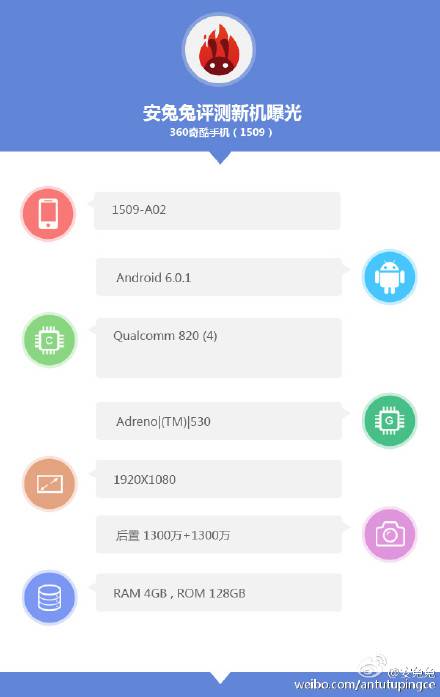