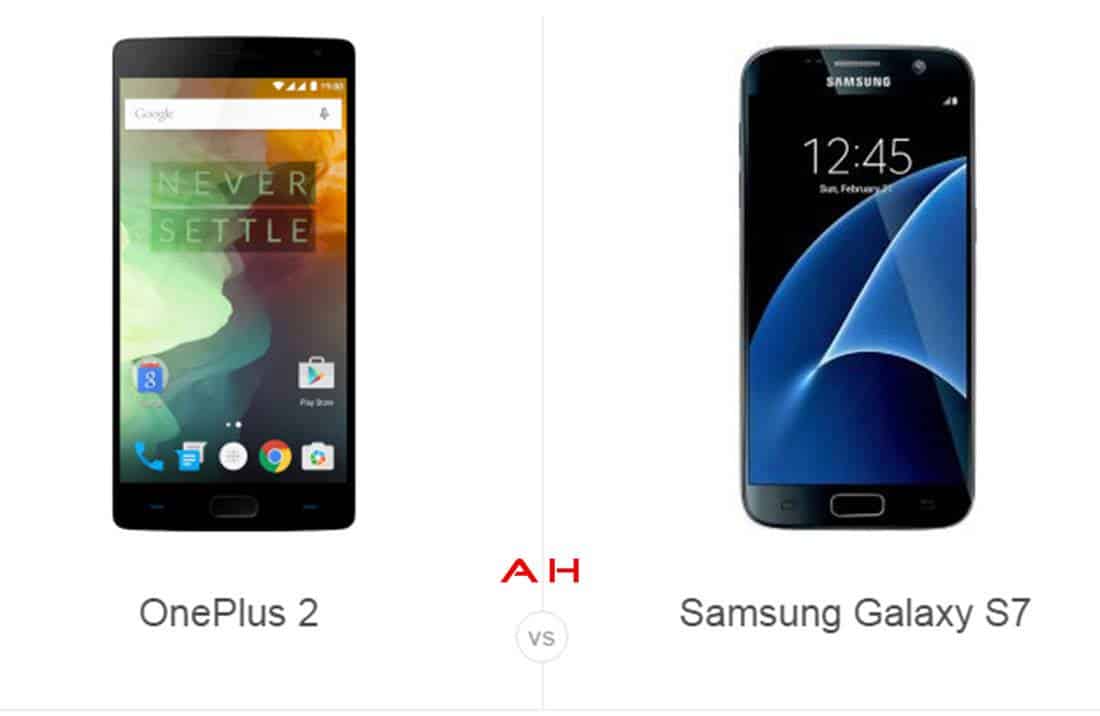 Do we have a good one for you today – the OnePlus 2 goes up against the Samsung Galaxy S7.  Does the ‘little engine that could’ from OnePlus at only $349, have what it takes to win this comparison against the $670 powerhouse from Samsung?  There is no denying, even from diehard OnePlus fanatics, that the Galaxy S7 is packing better technology, but is it enough to justify the $300+ price difference?  Both devices have a premium build quality – OnePlus always makes sure of that – but the curved metal frame and glass construction of the Galaxy S7 is most definitely a winner.  First, let’s look at what these two devices have in common and then we will look at each individual device to go into more detail.

These two devices have very little in common.  Their displays are different in size, use different screen technology and different resolutions.  They both use a Qualcomm Snapdragon processor but different models, however, they both offer a model that has 4GB of RAM and 64GB of memory.  Both camera areas offer similar megapixels for the main camera and both offer 5MP for the front-facing cameras (FFC), although the Galaxy S7 takes much better photos.  The OnePlus 2 and Galaxy S7 both have a non-removable battery and both sport a fingerprint sensor.  The usual suspects are mostly there – WiFi, Bluetooth (v4.1 in the OnePlus 2 and v4.2 in the Galaxy S7), GPS and a microUSB port (Type-C on the OnePlus 2) for charging and data transfer.  The most glaring omission is the lack of NFC on the OnePlus 2, which means no mobile payments (Android Pay) or file transfers.

OnePlus is all about building a quality smartphone at a low price and it is even more evident in the OnePlus 2 with its solid metal frame and trim.  Their “Flagship Killer,” as they like to call the OnePlus 2 had to cut some corners to get that price so low.  Choosing what features to keep and what to leave out of the design is very important. OnePlus decided to go with the same FHD display and the same size camera they did last year, but then removed the NFC capabilities.  They did add an extra 1GB of RAM, a fingerprint sensor and increased the battery size from 3100 mAh to 3300 mAh.

The OnePlus 2 sports a 5.5-inch LTPS LCD FHD display with a resolution of 1920 x 1080 pixels and 401 pixels-per-inch (PPI).  OnePlus chose the Qualcomm 64-bit Snapdragon 810 octa-core processor and to keep it cool, they slightly underclocked it to 1.56 GHz and 1.82 GHz.  The OnePlus 2 is currently only sold with 4GB of DDR4 RAM and 64GB of non-expandable storage.

They made some nice improvements by using an improved 13MP sensor from the OnePlus One, adding larger pixels, laser autofocus, a dual-tone LED flash, a f/2.0 aperture and OIS.  For the FFC, the OnePlus 2 uses a 5MP sensor with an aperture of f/2.4.  The OnePlus 2 increased the non-removable battery size from 3000 mAh to 3300 mAh – however, it does not offer quick charge or wireless charging.

Notes on the OnePlus 2 – it does come with a newer USB Type-C port for charging and data transfer that uses a nice, reversible plug.  The fingerprint sensor can unlock the phone, but nothing else…no Android Pay nor mobile purchases because it lacks NFC.  It runs OnePlus’ own OS called OxygenOS over stock Android Lollipop 5.1.  LTE bands will work on AT&T and T-Mobile networks with the OnePlus 2 and will cost you about $349 (reduced from $389) for the 64GB model and there are optional backings you can buy to customize your device – Kevlar, Black Apricot, Bamboo and Rosewood.

Samsung did a total redesign of the Galaxy S6 series last year – they moved away from their standard plastic casing and faux leathers and went with a solid metal frame and glass on the front and back.  The Galaxy S7 is simply a refinement of the Galaxy S6 with the outside being the same metal and glass construction with a slight curve on the sides to make it easier to pick up off a flat surface and a slight downward curve near the top to make it more comfortable to hold up to your ear.  It is still a beautiful smartphone, solidly built with a premium look and feel, but most of the improvements or changes occurred on the inside of the device.

The Galaxy S7 sports the same 5.1-inch QHD Super AMOLED display found on the Galaxy S6 except for slight improvements and comes with 577 PPI…including the ‘always-on’ display technology. The Galaxy S7 can have one of two processors – either their new Exynos 8890 octa-core processor or the new Qualcomm Snapdragon 820 quad-core processor depending where you are located.  The Galaxy S7 uses 4GB of DDR4 RAM and offers a 32GB or 64GB model using their much faster UFS 2.0 memory and the ability to expand this to 200GB with a microSD card.

Samsung took a huge chance using a new Dual Pixel 12MP with a larger sensor, allowing it to take in more light and information than the old 16MP sensor found on the Galaxy S6.  They also increased the aperture to f/1.7, increased the speed of autofocus and kept the auto HDR and OIS – DxOMark is already heralding it as the best mobile camera.  The Galaxy S7 uses a 5MP FFC with Live HDR, the large f/1.7 aperture and 22mm wide-angle lens for selfies and video chatting.  The Galaxy S7 battery, though still non-removable, jumped in size from 2550mAh to 3000mAh, comes with rapid charge and quick wireless charging.

The Galaxy S7 does offer IP68 water/dust proofing, expandable memory and “always-on” display.  It offers Samsung Pay, Android Pay, retains the heart rate monitor, oxygen saturation sensor and built-in wireless quick charging.  The Samsung battery will charge for up to four hours of usage in only 10 minutes and includes quick wireless charging.  The Galaxy S7 measures 142.4 x 69.6 x 7.9 mm, weighs in at 152 grams and will be offered in Black Onyx and Gold Platinum and cost about $670 off-contract and is available on all major carriers. 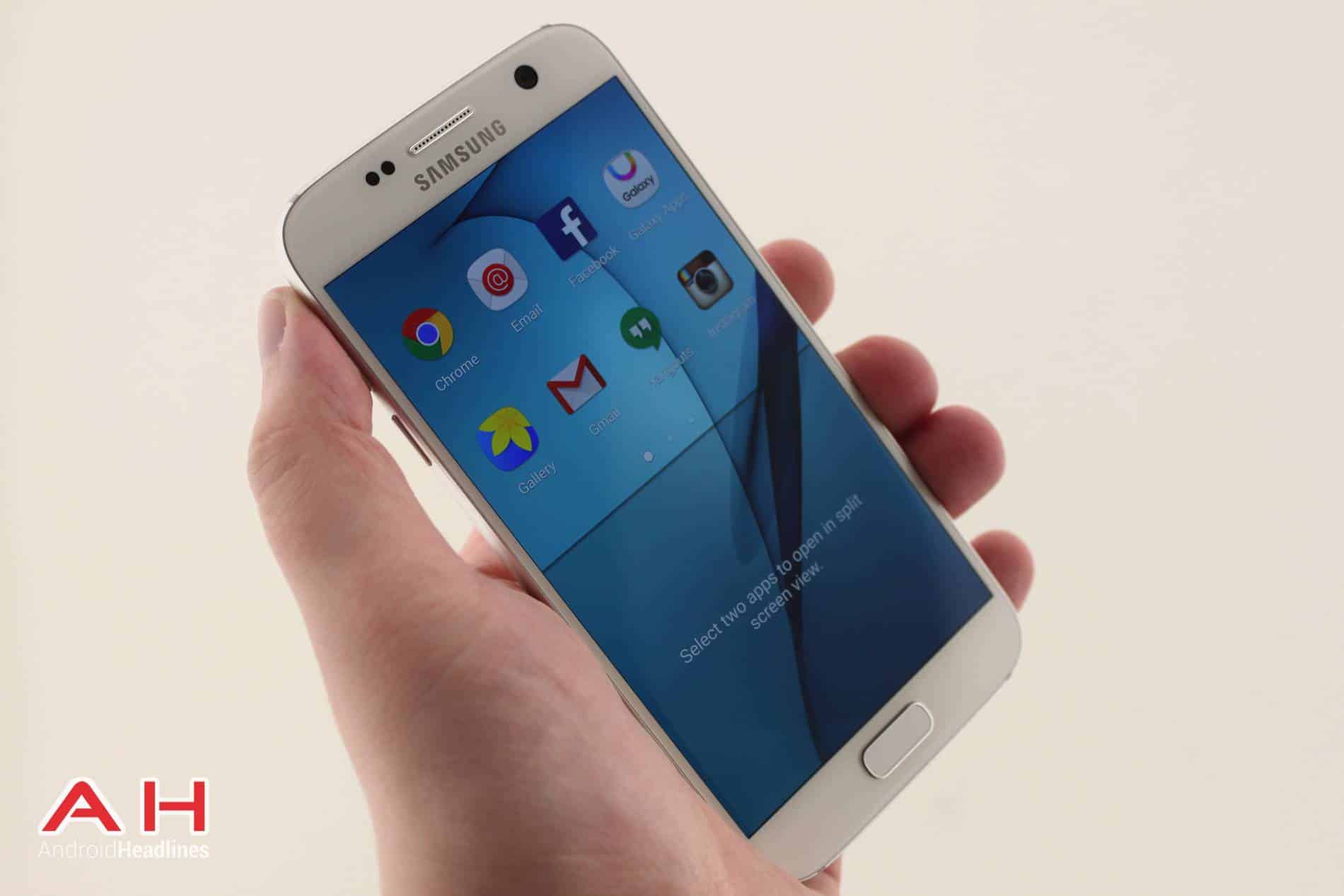 This is such a dilemma for me – in my heart I know the Samsung Galaxy S7 is the best of these two devices by far, but is it worth the extra $300+ over its rival, the OnePlus 2?  In a poll, it would be easy to pick the Galaxy S7 as the winner, but in reality, the OnePlus 2 offers so much value.  It is well-built, has a decent camera, a good processor, 4GB of RAM and a large battery – however, on the other hand, it still has a FHD display, no expandable memory past its 64GB, no way to ever make a mobile payment or NFC file transfer and its LTE only works on AT&T  or T-Mobile.  If you are okay with those pluses and minuses, then the OnePlus 2 is a steal at $349.

I am picking the Galaxy S7 as the winner of this specification comparison, because it outclasses the OnePlus 2 in all areas – except the price comparison.  If you do not need any of the Galaxy S7’s extra features, do not mind last year’s processor and already use AT&T or T-Mobile’s network, then you would be hard pressed to find a better bargain than the OnePlus 2.  However, if you need to purchase TWO devices, a Galaxy S7 with the BOGO option even solves the price dilemma.