Do we have a good one for you today – the Motorola Droid Turbo 2 goes up against the new Samsung Galaxy S7 Edge.  Available as a Verizon exclusive since October, the Droid Turbo 2 is quite a force to be reckoned with – but how does it hold up against the new Galaxy S7 Edge?  You can use Moto Maker to customize your Turbo 2, but how good is the build quality when comparing it to the curved metal and glass construction of the S7 Edge? Let’s take a quick look at what these two flagships have in common and then look at each one in more depth.

For starters, the Droid Turbo 2 and Galaxy S7 Edge are very close to the same height and even width, although the S7 Edge is certainly thinner and lighter.  The displays are remarkably close – 5.4-inches vs 5.5-inches – and both are using AMOLED technology and both even sport a QHD resolution of 2560 x 1440 pixels.  The Turbo 2 has 540 pixels-per-inch (PPI) and the Galaxy S7 Edge delivers 534 PPI.  Both devices use a Snapdragon processor, but different models… both also offer models with 32GB or 64GB of internal memory and room for expansion.  The Turbo 2 and S7 Edge both use a 5MP front-facing camera (FFC) for selfies and video chats.  They have the usual suspects – WiFi, Bluetooth (v4.1 on the Turbo 2 and v4.2 on the S7 Edge), GPS, NFC, a microUSB v2.0 port for charging and data transfer.  They both have large, non-removable batteries that can quickly be charged and they both have built-in wireless charging.

The Motorola Droid Turbo 2 is a Verizon family exclusive – the Turbo model made its first appearance last year and was a big hit with its huge battery and Turbo Charger.  The revised model, while it looks very much like the original, there are many improvements inside the device.  Moto beefed up the main camera with an all-new 21MP sensor for better pictures, made charging that huge battery even faster and then added a new ShatterShield display.  The Droid Turbo 2 has a solid build and to give it a more premium look you can use Moto Maker and customize the colors and the type of backing.

The Droid Turbo 2 comes with a 5.4-inch QHD AMOLED display with a resolution of 2560 x 1440 pixels and 540 pixels-per-inch (PPI.)  Motorola is protecting the display with their new and exclusive shatterproof display – dubbed ShatterShield.  This compares to the 5.5-inch Super AMOLED QHD dual curved display on the Galaxy S7 Edge with 534 PPI.  The Droid Turbo 2 sports a 64-bit Snapdragon 810 octa-core processor with four cores clocked at 1.5 GHz and four cores clocked at 2.0 GHz and an Adreno 430 GPU.  The Galaxy S7 Edge uses the newest Snapdragon 820 quad-core processor and Adreno 530 GPU or their Exynos 8890 octa-core processor depending where you purchase the device.  The Droid Turbo 2 has 3GB of DDR4 RAM and a choice of 32GB or 64GB of internal memory with expansion up to 200GB via a microSD card – the Galaxy S7 Edge packs 4GB of DDR4 RAM and 32GB or 64GB of internal storage and offers memory expansion up to 200GB.

Motorola took the camera area very seriously on the Droid Turbo 2 – their large 21MP main camera uses a new sensor, a larger f/2.0 aperture, phase detection autofocus and a dual-tone LED flash.  A 5MP FFC handles the selfies and video chatting.  This goes up against a new Dual Pixel main camera of 12MP in the Galaxy S7 Edge and a 5MP FFC.  The Turbo 2 has a huge non-removable 3760mAh battery that offers up to two days of use, but charging is not a problem as it comes with a Turbo Charger for quick charges and offers wireless charging as well.  The Galaxy S7 Edge also sports a large 3600mAh non-removable battery and offers a quick charge feature and quick wireless charging.

The Motorola Droid Turbo 2 has dual front-facing speakers and is running almost stock Android, although Motorola adds their Moto Voice, Moto Assist, Moto Display and Moto Actions.  It includes NFC for mobile payments, but no fingerprint sensor for authorization like the Galaxy S7 Edge.  It also has Turbo Charging for its larger, though non-removable, battery and it includes wireless charging.  It also sports the new shatterproof display, nano-coating for repelling water and IR Blaster.  The device measures 149.9 x 78 x 9.2 mm and weighs in at 169 grams and will cost approximately $720 with options to customize the device via Moto Maker.  The Droid Turbo has already received its Android 6.0 Marshmallow update.

After last year’s total redesign of the Galaxy S6, Samsung only made some minor changes on the outsideof the  Galaxy S7 Edge, however, most of the upgrades are inside the device and not visible to the naked eye.  Does that make it any less exciting this year – well, maybe a tad?  The Galaxy S7 Edge is still a beautiful device, certainly more so than the Droid Turbo 2 – the Galaxy S7 Edge just has a certain ‘wow’ factor and premium look to it.  In this comparison, we are looking at specifications and the innovations that comprise those specs, so let’s take a closer look at the new Galaxy S7 Edge.

The Galaxy S7 Edge has a beautiful 5.5-inch Super AMOLED display with a QHD resolution and 534 PPI as compared to the 5.4-inch AMOLED QHD display on the Droid Turbo 2 with 540 PPI.  The S7 Edge also sports a dual-curved display that can function on its own to access quickly your ten favorite contacts and more but does not offer the shatterproof display that is on the Droid Turbo 2.  The Galaxy S7 Edge uses either an Exynos 8890 octa-core processor with four-cores clocked at 1.6GHz and four cores clocked at 2.3GHz or the newest Snapdragon 820 quad-core processor with two cores clocked at 1.6GHz and two cores clocked at 2.15GHz. Which processor you receive is dependent on where you live.  The S7 Edge packs 4GB of DDR4 RAM and offers either 32GB or 64GB of faster UFS 2.0 memory – the Droid Turbo 2 offers 3GB of DDR4 RAM and 32GB or 64GB of memory.  Both offer room for expansion up to 200GB via a microSD card.

Samsung really changed up the camera area of the Galaxy S7 Edge  – gone is the conventional 16MP award-winning shooter from the S6 models and instead is a new Dual Pixel 12MP with a larger sensor, allowing it to take in more light and information than the smaller 16MP sensor.  The aperture was increased to f/1.7, included fast phase detection autofocus, auto HDR and retained OIS.  This goes up against a new 21MP camera setup in the Droid Turbo 2.  The S7 Edge uses a 5MP wide-angle lens, f/1.7 aperture and Live HDR for its FCC and this goes up against the 5MP FCC on the Droid Turbo 2.  The S7 Edge includes a large 3600 mAh non-removable battery with quick charge and quick-charge wireless charging as well.  This goes up against the Droid Turbo 2’s slightly larger 3760mAh non-removable battery, also with quick charge and wireless charging.

The distinguishing things found on the Galaxy S7 Edge have to start with the dual-curved edge – it is stunning to view and even slightly functional.  The S7 Edge also offers IP68 water and dust protection, although the Turbo 2 does have a nano-coating.  You can also use Samsung Pay to make mobile purchases just about anywhere you can swipe a credit or debit card.  The S7 Edge also has a heart rate monitor, oxygen saturation sensor and more importantly, a fingerprint sensor to authorize mobile payments.  The S7 Edge measure 150.9 x 72.6 x 7.7 mm, weighs in at 157 grams and available in Black, White, Gold and Silver, costing about $790. 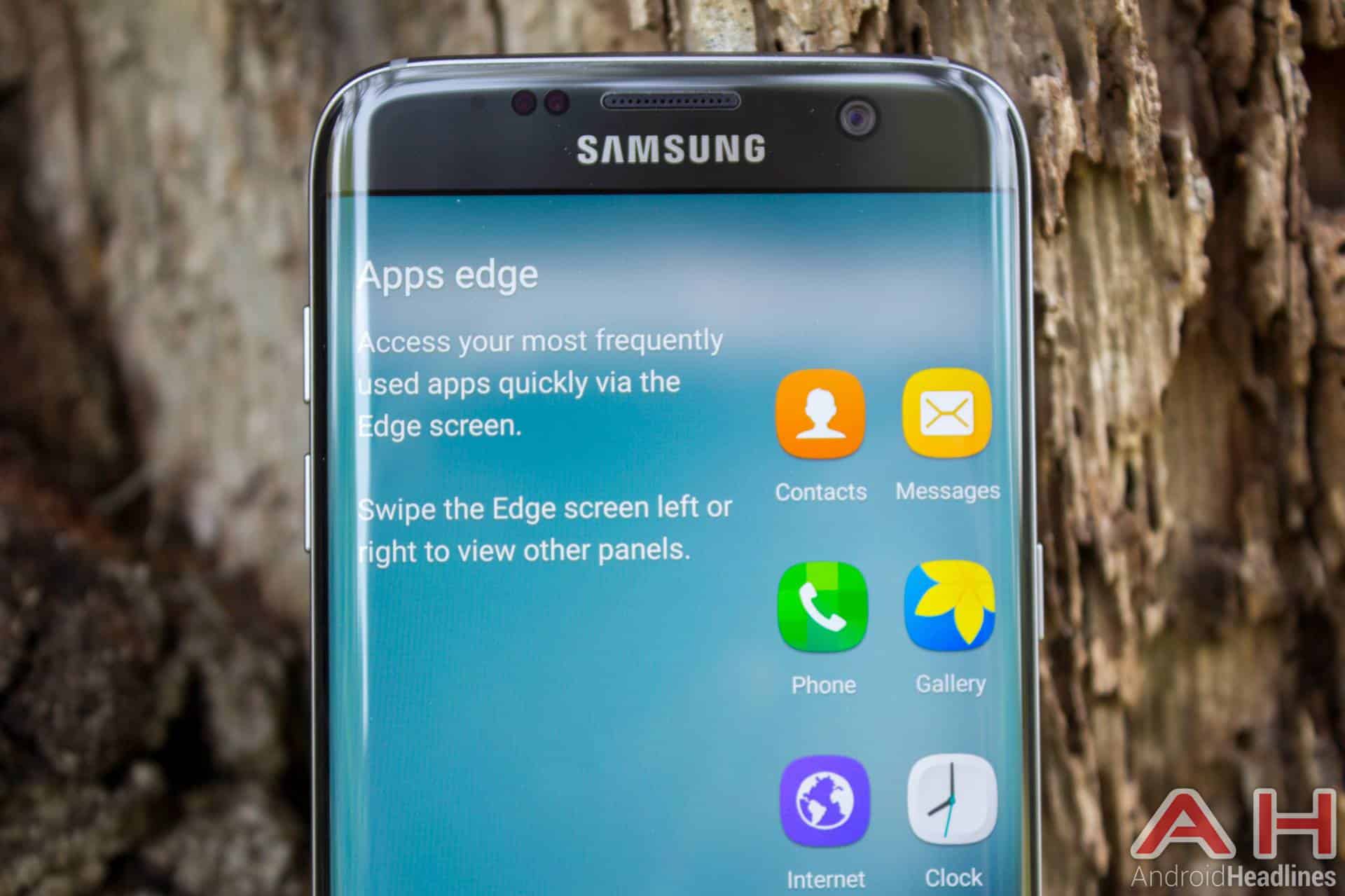 I thought this would be a tough decision, but after going through the specifications and features of each device, I have to crown the Samsung Galaxy S7 Edge as the winner of this comparison – especially when you factor in that they both cost almost the same amount.

The Droid Turbo 2 is a great device but really offers nothing over the Galaxy S7 Edge other than the shatterproof display and dual front facing speakers…not to mention that it is an exclusive on the Verizon network.  If it cost $100 or so less, it might be worth consideration, but as it stands, the S7 Edge is the clear winner.