Do we have a good one for you today – the Motorola Droid Turbo 2 goes up against the new LG G5.  How does the Turbo 2, available since October, hold up against the newer LG G5?  While you can use Moto Maker to customize the Turbo 2, how does its build quality and flagship status stand up to the new all-metal body design of the LG G5?  The Turbo 2 used the best processor it could when it was designed and likewise with the LG G5.  Let’s take a quick look at what these two flagships have in common and then look at each one in more depth.

The Droid Turbo 2 and the LG G5 do have a few things in common, and it starts with physical size – the two devices are almost identical in height and width with the LG G5 being the thinner and lighter one of the two…most likely because of the large battery in the Turbo 2.  The displays are almost identical in size – off by only .1-inches – and both use the QHD resolution, though different technologies.  Both devices use the top-of-the-line Qualcomm Snapdragon processor, but the Turbo 2 uses last year’s model (810) and the LG G5 uses this year’s model (820).  The Turbo 2 and the LG G5 both use DDR4 RAM, but the LG G5 uses 4GB and the Turbo 2 uses 3GB.  Both have a 32GB memory option and room to expand that memory via a microSD card – 200GB in the Turbo 2 and 2TB in the LG G5.

The Motorola Droid Turbo 2 is part of the exclusive Verizon family of Droid models – the Turbo model made its first appearance last year and was a big hit with its huge battery and Turbo Charger.  The revised model looks very much like the original with most improvements inside the device.  Moto added an all-new 21MP sensor for better pictures, made charging even faster and added their new ShatterShield display.  The Droid Turbo 2 has a solid build and by using Moto Maker, you can customize the colors and the type of backing…giving it a more premium look.

The Droid Turbo 2 comes with a 5.4-inch QHD AMOLED display with a resolution of 2560 x 1440 pixels and 540 pixels-per-inch (PPI.)  Motorola then covered the display with their new and exclusive shatterproof display they are calling ShatterShield.  This compares to the 5.3-inch QHD IPS LCD display on the LG G5 with 554 PPI.  The Droid Turbo 2 sports a 64-bit Snapdragon 810 octa-core processor with four cores clocked at 1.5 GHz and four cores clocked at 2.0 GHz and an Adreno 430 GPU.  The LG G5 uses the newest Snapdragon 820 quad-core processor and Adreno 530 GPU.  The Droid Turbo 2 has 3GB of DDR4 RAM and a choice of 32GB or 64GB of internal memory with expansion up to 200GB via a microSD card – the LG G5 packs 4GB of DDR4 RAM and 32GB of internal storage and offers memory expansion up to 2TB.

Motorola really improved the camera area on the Droid Turbo 2 – the 21MP main camera uses a new sensor, a larger f/2.0 aperture, phase detection autofocus and a dual-tone LED flash.  A 5MP front-facing camera (FFC) handles the selfies and video chatting.  This goes up against a new dual main camera – 16MP and 8MP – in the LG G5 and a larger 8MP FFC.  The Turbo 2 has a huge non-removable 3760mAh battery that offers up to two days of use, but charging is not a problem as it comes with a Turbo Charger for quick charges and offers wireless charging as well.  The LG G5 has a much smaller 2800mAh battery, but offers a quick charge feature and is removable.

The Motorola Droid Turbo 2 has dual front-facing speakers and is running almost stock Android, although Motorola adds their Moto Voice, Moto Assist, Moto Display and Moto Actions.  It includes NFC for mobile payments, but no fingerprint sensor for authorization like the LG G5.  It also has Turbo Charging for its much larger, though non-removable, battery and it includes wireless charging.  It also sports the new shatterproof display and nano-coating for repelling water.  The device measures 149.9 x 78 x 9.2 mm and weighs in at 169 grams and will cost approximately $625 with options to customize the device via Moto Maker.  The Droid Turbo has already received its Android 6.0 Marshmallow update. 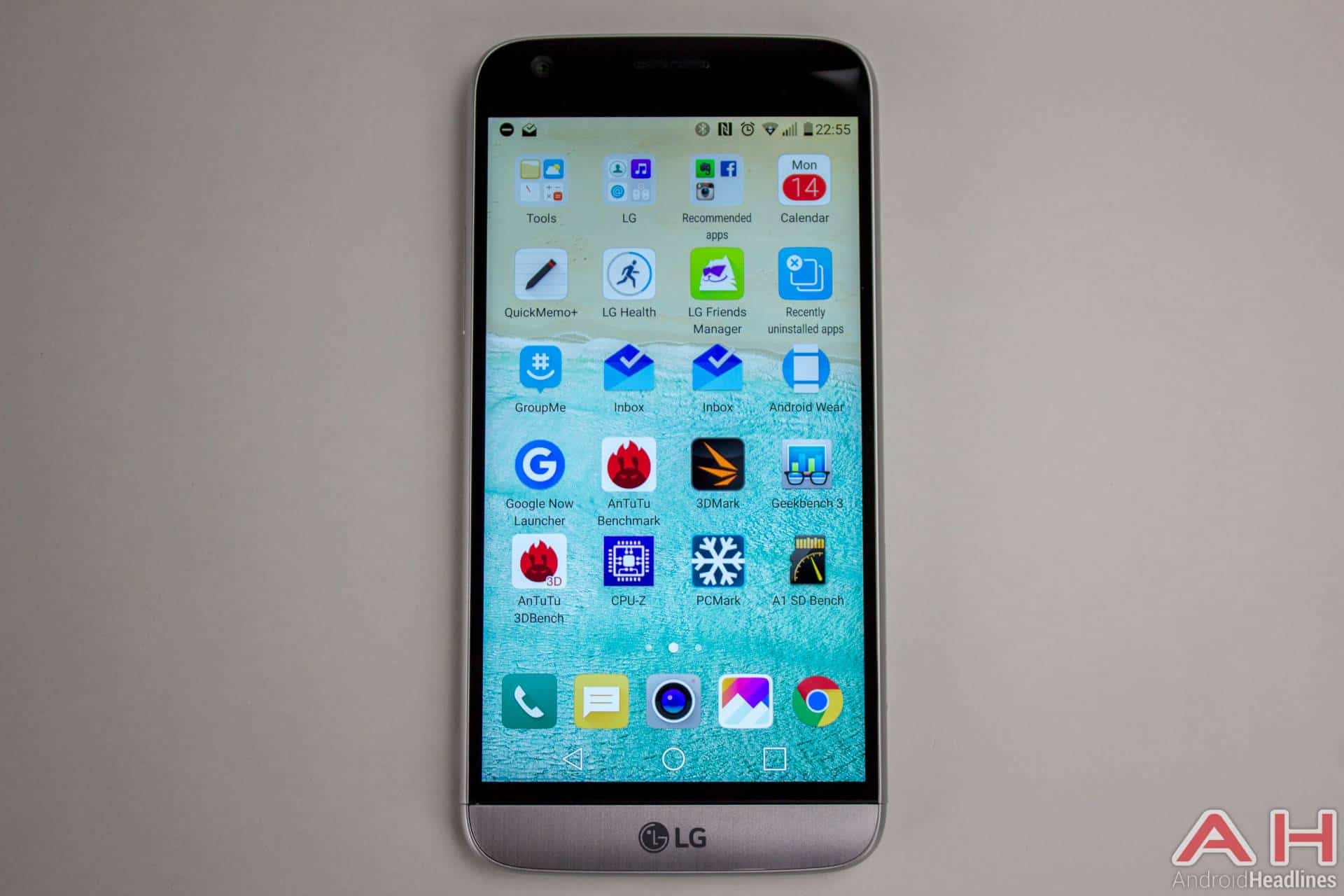 Owners of the LG G4 would not recognize the new LG G5 – with a complete redo from the ground up, LG has given everybody a reason to upgrade now.  We knew that G5 would come equipped with an awesome camera, but with the new dual-camera, it leaves us wanting to review the new G5 even more.  We knew there was an all-metal body coming, but the LG G5’s big news are the modules the device can use – by pushing in a button on the lower side, you can slide out the battery and slide in different modules.  One immediately available adds a larger battery and camera controls – making it easier to take pictures, gives you a bulge to grab and offers up physical camera controls.

LG kept its built-in IR Blaster and FM radio while finally adding a fingerprint sensor in place of the rear-mounted controls.  The sensor does click inward to act as an on/off switch, but the volume controls return to the side of the device.  LG also followed Google’s lead by starting to use the Type-C USB port on the G5. Let’s take a closer look at the new LG G5 and see just how the specs and design hold up to the Droid Turbo 2.

The LG G5 sports a 5.3-inch IPS LCD QHD always-on display with a resolution of 2560 x 1440 pixels and 554 PPI that is slightly smaller than the Turbo 2’s 5.4-inch AMOLED QHD display and 540 PPI.  The brains come from the newest Qualcomm Snapdragon 820 quad-core processor with 4GB of DDR4 RAM and 32GB of internal memory, expandable to 2TB via a microUSB card.  This goes up against the Turbo 2 with a Snapdragon 810 octa-core processor with 3GB of DDR4 RAM and either 32GB or 64GB of expandable internal memory to 200GB.

LG made big changes in the G5’s camera area by taking the 16MP sensor from the LG G4 and adding another 8MP wide-angle sensor for dual cameras.  Then they added new software and retained the 8MP FFC from the G4 for selfies and video chatting.  This goes up against a very good Turbo 2 camera area that uses a main 21MP sensor and a 5MP FFC.  LG decreased the battery size from the 3000mAh found on the LG G4 to 2800mAh, but it is still removable and has quick charge capabilities, although it loses wireless charging due to the metal case.  The Turbo 2 has a much larger, non-removable, 3760mAh battery that will last two days, has quick charge capabilities and built-in wireless charging.

This was really quite an easy pick this time around – the LG G5 wins this specification comparison.  I am not implying that the Motorola Droid Turbo 2 is not a great device because it is, but the LG G5 has a few things going for it that the Turbo 2 does not offer.  For one, the Turbo 2 is limited to the Verizon network and that simply does not still well with many users.  It has no removable battery, a lesser processor, less RAM, no modules and no fingerprint sensor.  It does have a shatterproof display, nano-coating, a larger, though non-removable battery, an AMOLED display and dual front-facing speakers.

The new LG G5 offers up the newest Snapdragon 820, Adreno 530 GPU, more RAM, the ability to expand the internal memory to 2TB, what is sure to be a great camera area, always-on display, newer Type-C connector, a fingerprint sensor for authorizing mobile payments, removable battery and the ability to use modules. When you factor in that both of these devices cost about the same amount, it is simply a no-brainer – the LG G5 offers better overall specifications and options to expand the device to more than a mere smartphone and it does it a reasonable price.