Do we have a good one for you today – the LG V10 goes up against the Samsung Galaxy S7.  It is the battle of stainless steel versus metal and glass – the two South Korean giants go up against one another for bragging rights.  Does the LG V10, which came out in October, still have what it takes to win against the newly released Galaxy S7?  The LG V10 is a completely new model in the LG line-up while the Galaxy S7 is a mere refinement of last year’s totally redesigned Galaxy S6.  Both are solid devices, beautiful in every sense of the word and certainly the definition of premium smartphones.  Let’s take a look to see just what these two devices have in common and then we will take a closer look at each individual device.

The LG V10 and Galaxy S7 have a few things in common – very few.  They both employ the Quad HD (QHD) display resolution of 2560 x 1440 pixels but are different sizes and technologies.  Both devices use a Qualcomm processor, but different models, however, they both use 4GB of RAM and offer 32GB or 64GB models with internal memory expansion.  Both offer an excellent camera area, but go about it in different ways and while they both use a 5MP sensor for their front-facing cameras (FFC), the V10 use two of them.  They both sport a fingerprint sensor for unlocking the device and authorizing mobile payments…using Marshmallow.  Both offer a 3000mAh fast battery charging battery, although the LG V10 is removable and the Galaxy S7 is non-removable.  Both offer the usual suspects – WiFi, Bluetooth (v4.1 on the V10 and v4.2 on the S7), GPS, NFC and a microUSB port for charging and data transfer.

LG introduced their new ‘flagship,’ the LG V10, back in October and it certainly made those that follow the LG ‘G’ series to stand up and take notice.  Not only because it is sculptured from stainless steel with a silicone backing, but also because of its technology – LG gave it two 5MP FFCs and a small, independent display sitting above the 5.7-inch main display, which can operate when the main display is off.  Let’s take a closer look at the LG V10 and see just how it stacks up against the new Samsung Galaxy S7.

The LG V10 uniquely sports two displays over the top of one another – there is a main IPS Quantum QHD display measuring 5.7-inches with a resolution of 2560 x 1440 pixels and 515 PPI.  Above the main display, near the top of the device, is a 1040 x 160 pixel display that is also 515 PIP.  The secondary display can be functional while the main display is off and can be used to show notifications, the weather, the time/date, app shortcuts and more just like the ‘always-on’ display on the Galaxy S7.  This goes up against the 5.1-inch QHD Super AMOLED ‘always-on’ display on the Galaxy S7 with 577 PPI.  The LG V10 uses a 64-bit Qualcomm Snapdragon 808 hexacore processor with four cores running at 1.44GHz and two cores running at 1.8GHz.  This goes up against the newest 64-bit Snapdragon 820 quad-core processor in the Galaxy S7 or the Exynos 8890 octa-core – depending where it is purchased.  The LG V10 packs 4GB of DDR3 RAM and 32GB or 64GB of internal storage with room to expand an additional 2TB, while the Galaxy S7 packs 4GB of faster DDR4 RAM and 32GB of UFS 2.0 memory with expansion up to 200GB.

The main camera areas should be very competitive, yet they go about it in a different manner – the LG V10 uses a 16MP sensor, adds laser autofocus, a large f/1.8 aperture, OIS and an LED flash.  This goes up against a new Dual Pixel 12MP sensor in the Galaxy S7.  When it comes to dual cameras, the LG V10 uses a dual 5MP FFC to add a wider field and more depth to the traditional selfie or video chat, while the Galaxy S7 uses a single 5MP FFC.  The LG V10 packs a 3000mAh removable battery versus a 3000mAh non-removable battery in the Galaxy S7 – both should last through an entire day with rapid charge available on both devices and quick wireless charging on the Galaxy S7.

The LG V10 has a speaker on the bottom of the device like the Galaxy S7 and includes Hi-Fi circuitry for improved sound through the headphones.   The V10 measures 159.6 x 79.3 x 8.6mm and weighs in at 192 grams.  The available colors are Space Black, Luxe White, Modern Beige, Ocean Blue and Opal Blue.  It is available on Verizon, AT&T and T-Mobile and priced approximately $670.

The Galaxy S7 is simply a small upgrade that Samsung did after a total redesign of the Galaxy S6 series last year.  The outside is still the same metal and glass construction and rather hard to distinguish from the Galaxy S6, although the top of the device does have a slight downward curve added to make it more comfortable to hold up to your ear.  It is still a beautiful smartphone, solidly built with a premium look and feel, but most of the improvements or changes occurred on the inside of the device.

The Galaxy S7 sports the same 5.1-inch QHD Super AMOLED display found on the Galaxy S6, except for a few tweaks here and there, with 577 PPI.  The LG V10 uses a larger, 5.7-inch IPS LCD QHD display with 515 PPI. While the Galaxy S7 employs the ‘always-on’ display technology on the main display, the LG V10 has a separate display the sits on top of the upper part of the main display for notifications. The Galaxy S7 model uses two processors – either their new Exynos 8890 octa-core processor or the new Qualcomm Snapdragon 820 quad-core processor depending where you are located – the LG V10 uses the Snapdragon 808.  The Galaxy S7 uses 4GB of DDR4 RAM while the LG V10 uses 4GB of DDR3 RAM and the S7 offers 32GB or 64GB of internal UFS 2.0 memory but added back the ability to expand this to 200GB with a microSD card.  The LG V10 offers 32GB or 64GB of internal memory as well and expansion up to 2TB.

The camera area really changed this year as Samsung is using a new Dual Pixel 12MP with a larger sensor, allowing it to take in more light and information than the old 16MP sensor found on the Galaxy S6.  They also increased the aperture to f/1.7, increased the speed of autofocus, kept the live HDR and OIS.  We cannot wait to get the Galaxy S7 in-house to test the new configuration while the LG V10 kept the 16MP from last year’s LG G4.  The Galaxy S7 uses a 5MP FFC with Live HDR, an even larger f/1.7 aperture and 22mm wide-angle lens for selfies and video chatting.  The LG V10 uses dual 5MP FFCs.  The Galaxy S7 battery, though still non-removable, jumped in size from 2550mAh to 3000mAh, comes with rapid charge and quick wireless charging.  This goes up against the 3000mAh removable battery in the LG V10, which also offers a rapid charge feature.

The Galaxy S7 does offer IP68 water/dust proofing and, like the LG V10, expandable memory and “always-on” display.  It offers Samsung Pay, retains the heart rate and oxygen saturation sensors and built-in wireless quick charging.  The Samsung battery will charge for up to four hours of usage in only 10 minutes and includes wireless charging.  The Galaxy S7 measures 142.4 x 69.6 x 7.9 mm, weighs in at 152 grams and will be offered in Black Onyx and Gold Platinum and cost about $670 off-contract. 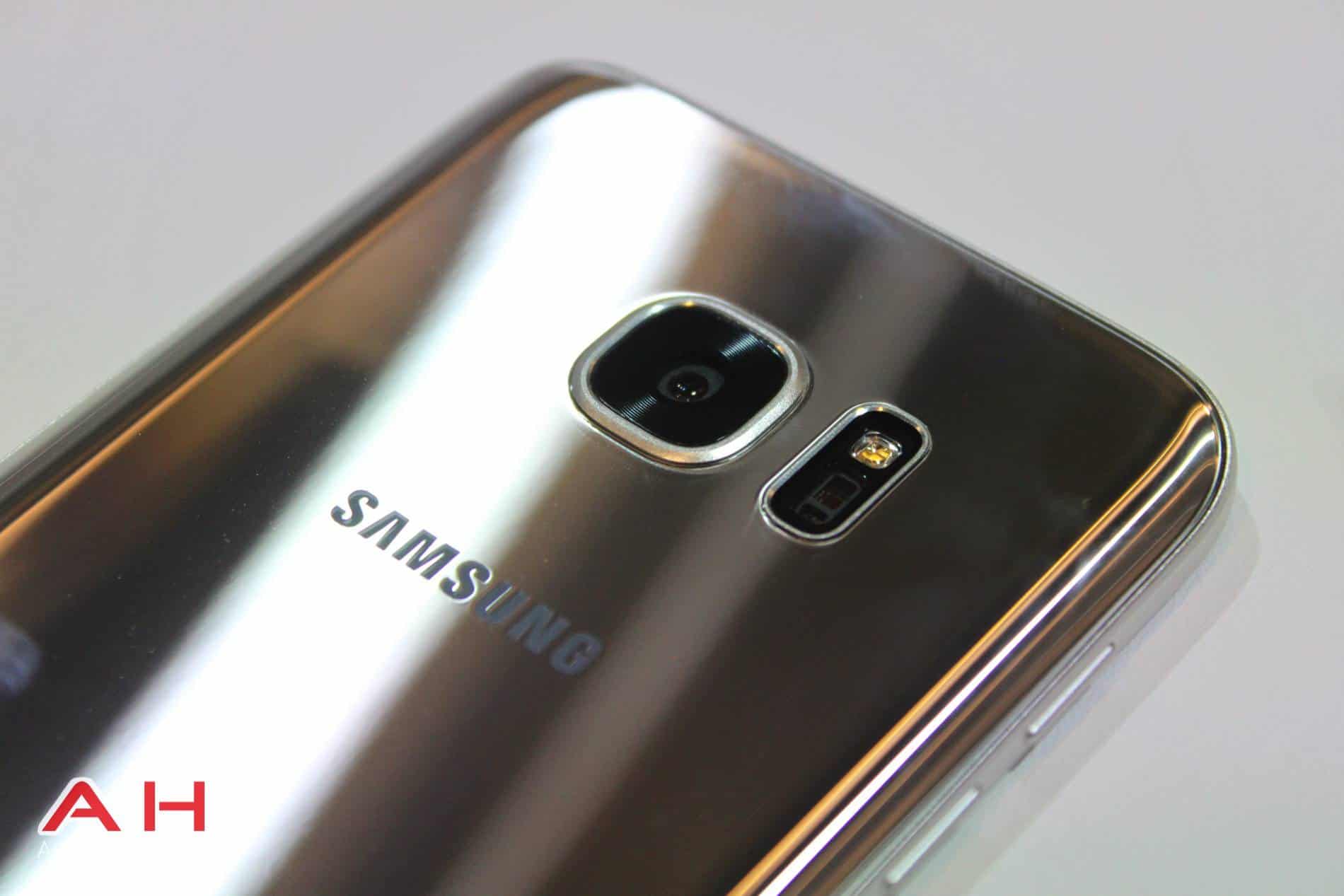 I put up the picture of the Samsung Galaxy S7 because it does have the better internal specifications – the Snapdragon 808 in the LG V10 is no match for the new Snapdragon 820 or the Exynos 8890 found in the Galaxy S7.  The Galaxy S7 sports the Super AMOLED display, it has the faster DDR4 RAM and the much faster UFS 2.0 internal flash memory. It sports a heart rate monitor, oxygen saturation sensor, IP68 dust and water resistance rating and quick wireless charging capability.  For those interested in mobile payments, it also has Samsung Pay along with Android Pay and its fingerprint sensor is PayPal certified.

The LG V10 is a great smartphone that approaches a couple of areas in a different fashion – it has a stainless steel body with a silicone coating for a great ‘grip factor’ and it uses a dual-display affair to increase battery life.  It uses dual FFCs to add a greater depth and field to your selfies and video chats and maintains its removable battery.

Both devices bring much to this comparison, but in different areas – while the LG V10 has some neat techno designs – dual display and dual FFCs while the Galaxy S7 has the real ‘meat and potatoes’ specifications – better processor, faster RAM and memory.  Since they work out to about the same selling price, you can decide what you want to ‘dine’ on.