Oppo is a China-based company which has managed to sell 50 million smartphones last year, an achievement that managed to surprise quite a few people in the industry. Either way, Oppo is very popular in Asia, and these numbers definitely prove that fact. This company is actually expected to introduce their new smartphones rather soon, Oppo has recently confirmed that the Oppo R7 and R7 Plus will be introduced on March 17th, while the two devices were also certified by TENAA (China’s equivalent to the FCC) recently.

That being said, the pricing of these two smartphones has also leaked recently, and the Oppo R9 Plus has just popped up on AnTuTu as well. According to the listing on AnTuTu, our previous spec info was pretty much spot on. As per this listing, the device will ship with a 1080p (1920 x 1080) display, and will be fueled by the Snapdragon 652 64-bit octa-core processor, along with an Adreno 510 GPU. The phone will also going to be equipped with 4GB of RAM and 64GB of internal storage, and Andriod 5.1.1 Lollipop will come pre-installed here, with Oppo’s ColorOS available on top of it. Interesting enough, AnTuTu’s listing also mentions that the Oppo R9 Plus will sport two 16-megapixel sensors, one on the front, and one on its back.

The Oppo R9 will be quite similar to the Oppo R9 Plus, but it will be somewhat smaller. The Oppo R9 is said to ship with a 5.5-inch display, while the Oppo R9 Plus will almost certainly sport a 6-inch panel. The only other difference between these two phones will be in internal storage count, and battery size. Speaking of which, both of these phones will ship with Oppo’s VOOC Flash Charge, though we still don’t know if Oppo plans to include their revolutionary next-gen VOOC here, or the last-gen technology. The Oppo R9 is said to cost 2,498 Yuan ($383) in China, while its bigger sibling will reportedly sell for 2,998 Yuan ($460) in the country. The company will introduce these two metal-clad handsets on March 17th, which is only a week away at this point, so stay tuned, we’ll report back if any additional leaks pop up before the launch event. 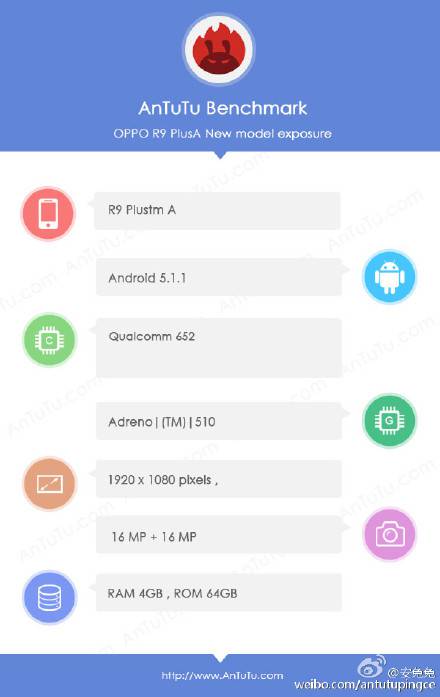