OnePlus One was one of the best handsets in 2014, and OnePlus followed up with its successor, the OnePlus 2 last year. The second-gen OnePlus device was also quite good, especially considering the price point, but people had plenty of complaints considering OnePlus omitted features such as wireless charging, NFC and fast charging. Well, many of us are interested to see what will the company do this year with the OnePlus 3, expectations are certainly quite high considering the quality of their previous devices.

We haven't really seen all that many OnePlus 3 rumors, but the company did say that the device will sport a considerably different design than its predecessor. That being said, the OnePlus 3 (A3000) surfaced on AnTuTu quite recently. According to the listing, the device will sport a fullHD (1920 x 1080) display, like its predecessor, and will ship with 4GB of RAM and 32GB of internal storage. We presume this is the basic version, and that the company will introduce a model with more storage on the inside as well. Anyhow, the phone is said to ship with the Snapdragon 820 64-bit quad-core SoC, and an Adreno 530 GPU for graphics. The 16-megapixel rear-facing, and an 8-megapixel front-facing cameras were also listed by AnTuTu, and Android 6.0.1 Marshmallow will come pre-installed on this device with OnePlus' Oxygen OS available on top of it. The OnePlus 3 will quite probably going to be made out of metal, at least partially, and it will be interesting to see whether OnePlus intends to keep the fingerprint scanner on the front side of the device.

Now, on top of all that, a recent rumor said that the phone will be launched on April 7th. This date comes as a bit of a surprise actually considering the fact that its predecessor was announced in July. On the other hand, the OnePlus One launched in April 2014, so this might make sense, though it seems a bit odd OnePlus didn't start teasing the arrival of OnePlus 3 already. Either way, the OnePlus 3 will be announced soon, and we'll leave it up to you to decided whether April 7th seems like a viable option or not. Stay tuned for further info, we'll report back as soon as new info pops up, as always. 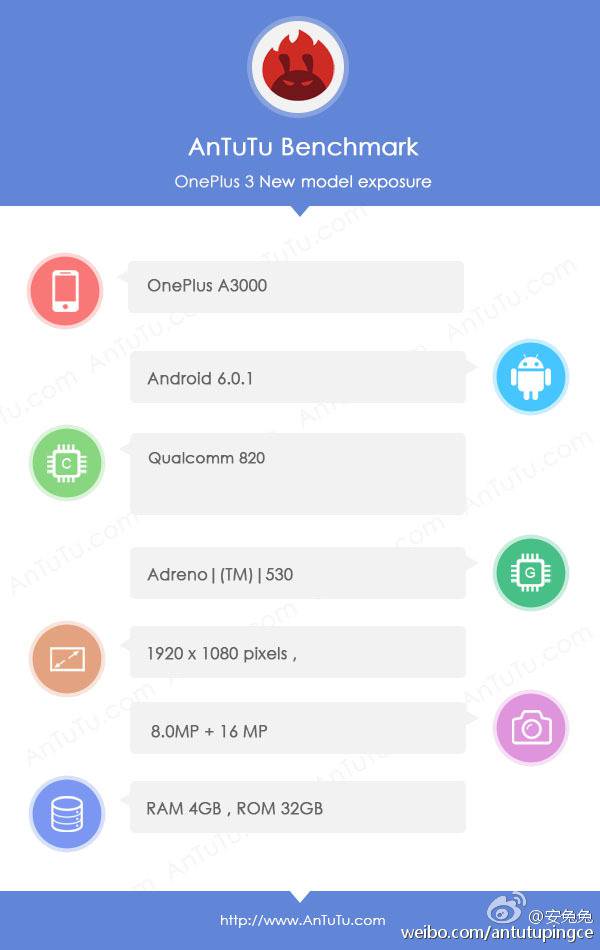