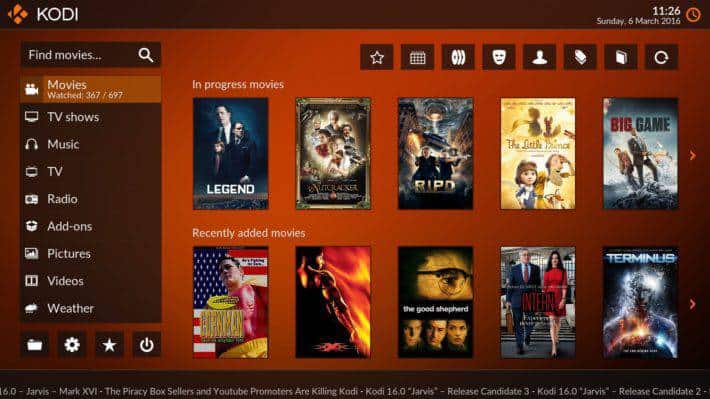 Kodi Media Center, formerly known as XBMC, which is an open source alternative to Plex, has just gotten a pretty decent update. At least in the nightly builds. Kodi Media Center allows you to play your media from another computer or server in your house, onto other displays, like your TV, monitor or another display. It's similar to Plex in that regard. Kodi Media Center, since being renamed from XBMC, has become quite popular, and now it's finally getting a much needed design overhaul. The developers have actually made two different themes for Kodi, there's one that is more suited for larger displays like TV's and monitors, while the other is more suited for smartphones and tablets. Both offer relatively the same functionality and experience, they are just more optimized for the displays that they are being used on.

The themes are available in blue, orange, purple, black/gray, and purple right now. There hasn't been any public plans on them adding more colors, but it is pretty likely. We might even have the ability to create our own colors for themes. There's not much else new right now, it's mostly just the way Kodi looks which isn't a bad thing. Always nice to get a refreshed design in an app, especially one that gets as much use as Kodi Media Center would. As mentioned, Kodi's latest nightly builds feature these new themes. So if you want to get this new look, you'll need to hit up the source link and grab the nightly build. However, it is worth mentioning and reminding everyone that nightly builds are typically pretty unstable. So if you are worried about having any bugs or issues that you don't want to deal with, we'd highly recommend sticking with the stable build that's available from the Google Play Store.

Those that might be new to Kodi Media Center, it is completely free – which is why it's open sourced – and works on a slew of platforms. This includes Android, Linux, Mac OS X, Windows, Raspberry Pi and much more. Allowing you to watch your media on just about any platform, something that everyone will definitely love to be able to do.