MediaTek is a Taiwan-based company which has managed to grow quite a bit in the last couple of years. MediaTek was once manufacturing entry-level processors which could not deal with the competition, but much has changed over time. MediaTek is now one of the best-known mobile SoC manufacturers, and their Helio X10 flagship processor was used by many, many smartphone manufacturing companies last year. Well, MediaTek has introduced their Helio X20 64-bit deca-core flagship processor a while back, and it seems like first Helio X20-powered devices will start arriving next month.

Despite the fact not a single Helio X20-powered phone is currently available out in the market just yet, Helio X30 rumors have already begun circulating the web. A recent rumor reported that the SoC will be arriving in 2017, which was to be expected, and now we actually have some new details when it comes to Helio X30. According to a new leak, the Helio X30 will be manufactured by TSMC, and will use a 10nm FinFET manufacturing process. This SoC will, allegedly, keep the deca-core architecture of the Helio X20 (2 x Cortex A7x + 4 x Cortex A53 + 4 x Cortex A35), but we’ll see quite a few improvements in other areas. MediaTek will, of course, upgrade the GPU on the Helio X30, ti will be powered by a quad-core PowerVR 7xxx GPU (exact model still unknown), and the SoC will support camera sensors up to 26-megapixel, while dual camera support will also be included. The SoC will perform better, and it will consume 50% less power according to this rumors, which is staggering. The Helio X30 is said to support Category 13 4G LTE, which is also rather interesting.

Now, MediaTek has recently introduced the Helio X25 processor as well, which is essentially a Helio X20 with a higher clock speed. This SoC will be exclusive to Meizu PRO 6 for a while, and today’s rumor says that the Helio X30 might meet the same fate. According to the available info, the Helio X30 will also be exclusive to a certain copmany for a period of time, and both Meizu and Lenovo have been mentioned as possible suitors. Either way, we’ll let you know as soon as more info surfaces, stay tuned. 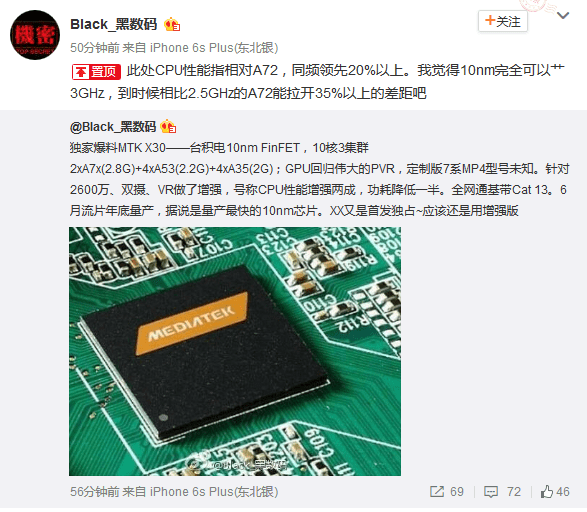