The number of devices running Android 6.0 Marshmallow, the latest version of Google’s mobile operating system, will surely increase in the coming months as many new smartphones will be launched running this version out of the box. For older devices, though, it might still take some time before they get updated to Marshmallow. Samsung recently released the update for their 2015 flagship models, at least in some regions. Unlike other companies, Samsung didn’t mention which of their phones were getting updated to Marshmallow or an estimated time-frame in which the update would be released. Some reports included leaked documents that allegedly contained such details, but there was no way to verify their authenticity.

Now, another leaked document from “a source familiar with Samsung’s plans” has come to light and contains some details regarding the updating process for Android Marshmallow. The document was released just yesterday and it shows that the update will be released in, at least, two phases. Phase 1 is dedicated to updating the company’s flagship models while the company will update some mid-range devices in Phase 2. Unfortunately, the picture shows very little of Phase 2, but the Phase 1 section contains the devices that will get updated and their respective model numbers, the status of the update as well as an estimated time-frame of when the update will supposedly reach those devices. 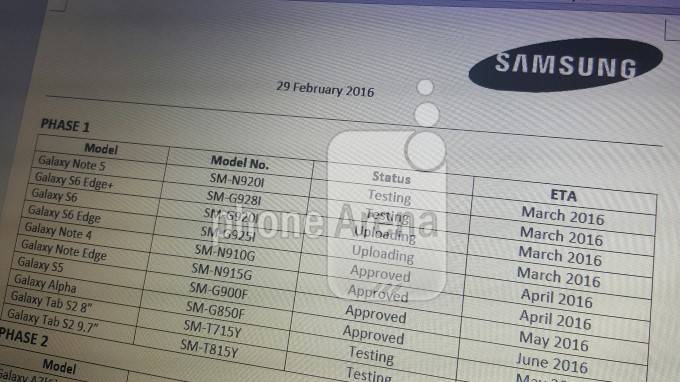