The Tizen-powered Samsung Gear S2 smartwatch unveiled at IFA 2015 has already received several software updates, introducing countless much-needed improvements. Earlier in December, the smartwatch received a software package optimized for improved battery life, which is one of those benefits that cannot be turned down by any smartwatch owner. Later in February 2016, the very same Gear S2 received another software update weighing roughly 91 MB, which included new performance improvements, bug fixes, along with a handful if new watch faces and applications. Needless to say, the company seems to be on an OS update spree, as earlier today a new software package reportedly became available on the Samsung Gear S2.

The new software update has a size of 82.51 MB, it bumps the software version to “R732XXU2CPB7”, and can be downloaded by Gear S2 owners using the Samsung Gear application. In terms of changes and additions, one of the new major features lies in the inclusion of “Flight Mode”, which works similarly to how Airplane Mode works on a smartphone, i.e., by enabling Flight Mode all the smartwatch’s connectivity options will be turned off. Furthermore, the Digital watch face has been enhanced and now allows users to pick and use an image from the Gallery application, and a manual update feature for the News Briefing application has also been included. For convenience, the new software package introduces adaptive brightness which does pretty much just that: it automatically adjusts the smartwatch’s display brightness according to the environment and thus avoiding excessive screen glare when using the smartwatch at night or in the dark. This has been one of the most sought-after additions since the digital timepiece was released, and it is finally here.

Keep in mind that, in order to be able and apply the new software update, the Samsung Gear application needs to be updated first and foremost. Furthermore, it’s recommended to download and install the update when you don’t necessarily need to utilize the smartwatch, as the device will not be usable during the updating process. In addition, following the update, all settings might be reverted to default values, so you might want to keep track of, and reconfigure them according to your needs once the updating process is complete. 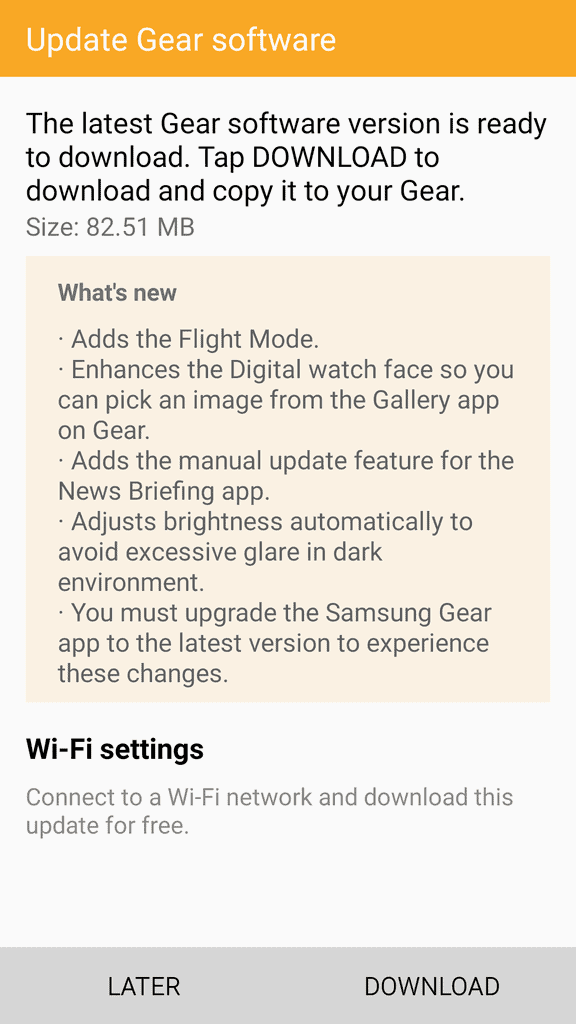