Xiaomi is the largest smartphone manufacturer in the Chinese smartphone market, though Huawei is a close second. Huawei is significantly better placed on a global scale though considering this company sells their devices all over the world, and they’re currently third-placed smartphone manufacturer globally. That being said, Xiaomi has recently introduced their Mi 5 flagship, and the Mi 4S handsets. The Mi 5 seems to be in high demand in China, and the phone is expected to roll out in additional markets later this month.

Now, the Mi 5 and Mi 4S, as well as every other Xiaomi smartphone that was released, ship with Xiaomi’s MIUI OS which is installed on top of Android. Xiaomi has unveiled the MIUI 7 OS last year, and that version was followed by MIUI 7.1, and MIUI 7.2 which was released not long ago. MIUI 7.2 was announced earlier this month for the Chinese variants of Xiaomi Mi 5, Mi 4S, Mi Note Pro, MI 4c, Mi Pad, Redmi Note 4G (Single SIM), and Redmi 1S. Now, Xiaomi did say that additional handsets will get the update later on, well, the update is on its way to Mi Pad 2, Redmi Note 3, Redmi 3 and Mi 4i as well now. Keep in mind that we’re talking about Chinese variants here as well. The company has also mentioned that additional phones will be added in the coming weeks as well, so you can expect this update to hit the vast majority of Xiaomi’s smartphones and tablets.

Now, as far as the update itself goes, MIUI 7.2 is not a huge overhaul of the OS, not even by a long shot. As its version says, this is just an incremental upgrade of the MIUI 7 which brings tons of bug fixes and performance improvements, though some features are included here as well. Xiaomi has included some new options in the Permissions Manager, while the File Explorer was also improved in this update. If you own a Chinese variant of one of the devices listed above, you’ll get this update soon, if you haven’t already. As for the rest of you, sit tight, Xiaomi keeps on adding new phones to this list, and the global rollout will commence soon as well. 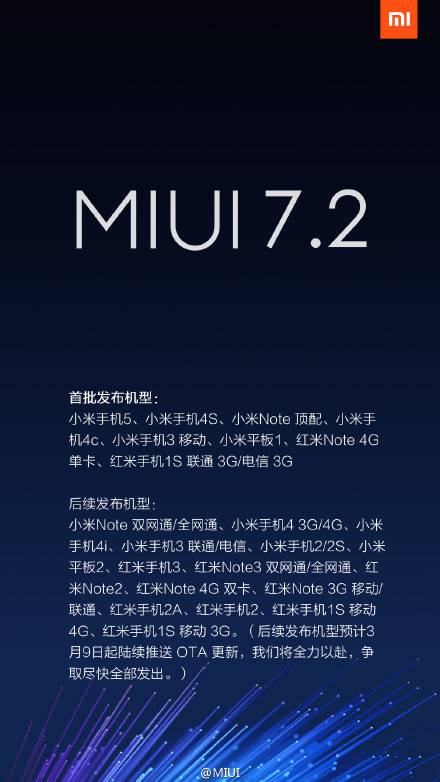