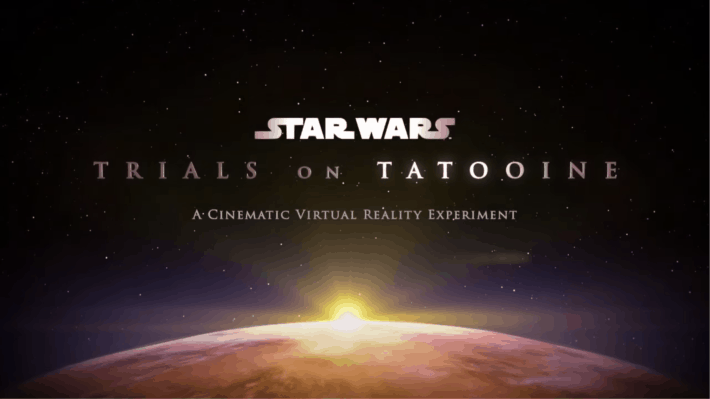 Virtual reality and virtual reality content are two of the biggest areas of technological development right now, with multiple companies working to get their products to market. HTC is one of those companies with the Vive VR headset that recently hit pre-order status not too long ago, and in addition to the already impressive collection of things you can do with the Vive, like the recently launched Portal Robot Repair demo, HTC has now partnered up with Lucasfilm's ILMxLab for a unique experience that is sure to delight the biggest Star Wars fans the world over. Essentially, Vive owners will get to fend off the Empire with a light saber.

The new VR experience is called Star Wars: Trials On Tatooine, and ILMxLab has just released an official trailer for the content. The whole experience is being called a virtual reality experiment, but Trials on Tatooine more or less plays out like a Star Wars game that allows the wearer of the headset to wield a lightsaber and battle Storm Troopers. Not so much by cutting your enemies down, but you do get to deflect shots from the blasters that are being fired at you. The experience lasts around ten minutes and should give users a brief take on what it would be like to fight alongside the rebels as a Jedi, although most are probably hoping that this short and sweet 10-minute romp turns into a full-fledged game at some point.

There's no actual mention of ILMxLab creating a game like this particular experience, although it wouldn't be hard to imagine that making this little demo available for HTC Vive owners was a proof of concept to get people excited about one should they produce it. Road To VR gives a detailed explanation of the hands-on experience, however there is no mention at all of how HTC Vive owners get their hands on it. You can view the trailer below though if you either haven't picked up a Vive or you simply wish to see what it looks like with your own eyes. HTC's Vive headsets are now selling for $799, and they've confirmed that they will be selling PC bundles with the headset at some point as well, so if you were interested in picking one you're now able to do so.